A 24-year-old man dressed in Batman's Joker costume attacked passengers on a Tokyo train line on Sunday evening, injuring 17 people as many party-goers headed into the city centre for Halloween gatherings, media reported.

By Reuters Staff
TOKYO (Reuters) -A 24-year-old man dressed in Batman's Joker costume attacked passengers on a Tokyo train line on Sunday evening, injuring 17 people as many party-goers headed into the city centre for Halloween gatherings, media reported.
Police arrested the suspected attacker on the spot, media reported. A man believed to be in his 60s was unconscious and in critical condition after being stabbed, while witnesses also said the attacker had spread fluid around the train and started a fire, according to media.
One video uploaded on Twitter showed a steady stream of people running away from a train car where, seconds later, a blaze lit up. Another video showed passengers rushing to squeeze out of the train's windows and onto the platform where the train had made an emergency stop.
"I thought it was a Halloween stunt," one witness told the Yomiuri newspaper, recalling the moment he saw other passengers running in a panic towards his train car. "Then, I saw a man walking this way, slowly waving a long knife." There was blood on the knife, he said.
Another video on Twitter showed a bespectacled man dressed in a purple suit and bright green shirt, as worn by the Joker, seated in an empty train puffing on a cigarette, his legs crossed and looking calm. …

No trick or treat candy for you.

The American version of this crime was far more serious.   James Holmes told police officers he was the joker when he was arrested in Aurora Colorado after shooting up a movie theater.  His primary weapon was  a Smith & Wesson M&P15 Sport rifle with a 100 round drum.  Fortunately the rifle jammed after firing only a few rounds and Holmes didn't know how to clear the jam.  His backup weapons consisted of a pump shotgun and a .40 caliber semi-automatic pistol with a 15 round magazine.   All of the weapons were purchased legally .  Holmes murdered 12 people and wounded 62 others.

In Japan mass murders usually use a knife because of strict gun control laws.  This is why mass murder is rare in Japan (and many other foreign countries.  The Japanese "Joker" didn't actually kill anyone.

In the United States psychotic individuals have easy access to guns.  The Las Vegas shooter killed 58 people and 851 people were injured.  Over 11,000 rounds were fired from the 32nd floor of the Mandalay Bay hotel.

Do guns make us safer?  Texas has the most "liberal" gun control laws.  There was a mass shooting in Texas yesterday. 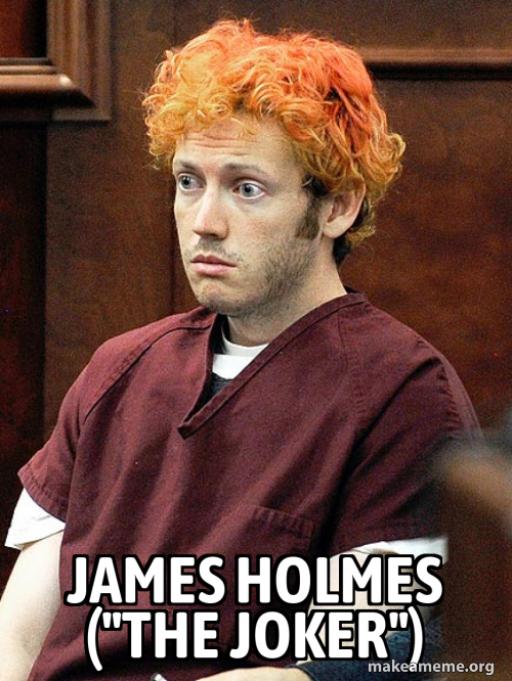 Professor Principal
2.1  Ender  replied to  al Jizzerror @2    one month ago

It's a shame these pieces of shit don't turn the weapons on themselves.

Mass murders often commit suicide.  Unfortunately they do it when they have already killed innocent people and they are surrounded by police.  Remember the Columbine High School massacre?  Those two assholes killed themselves after killing 13 innocent people and wounding 21 others.  Luckily their IEDs did not explode or it would have been much worse.