"Hey wow! Look at all those really big boats!" said Buttigieg while visiting the port. "Boats go vroooom! Pretty colors! I like the blue one!"

PACIFIC OCEAN—With a tremendous backlog at Long Beach and dozens of cargo ships helplessly stranded in the ocean waiting to be unloaded, the bored crews have arranged their ships to form the words of the patriotic cheer taking the world by storm: "Let's Go Brandon."

"Yeah, let's go Brandon!" said one ship's captain as he removed the cork from a bottle of mead and took a long, slow drink. "We here on the high seas often sing our sea shanties in his honor and pour out rum for such a swell guy."

"SQUAWK! SUCH A SWELL GUY!" the parrot on his shoulder repeated.

The captain said he and the other ship captains wanted to spell out a different phrase, but it was rated "ARRRRR".

Experts who know what they're talking about say the catastrophic background has nothing to do with labor shortages due to vaccine mandates, or any policy related to President Biden and his highly competent Transportation Secretary Pete Buttigieg.

"Hey wow! Look at all those really big boats!" said Buttigieg while visiting the port. "Boats go vroooom! Pretty colors! I like the blue one!" He then went back home to play some Ticket to Ride and Mario Kart to help educate himself on more transportation-related issues.

Longshoremen predict they will have the backlog fixed by 2028.

Oh wait, this is not real, so they look like a bunch of not real idiots 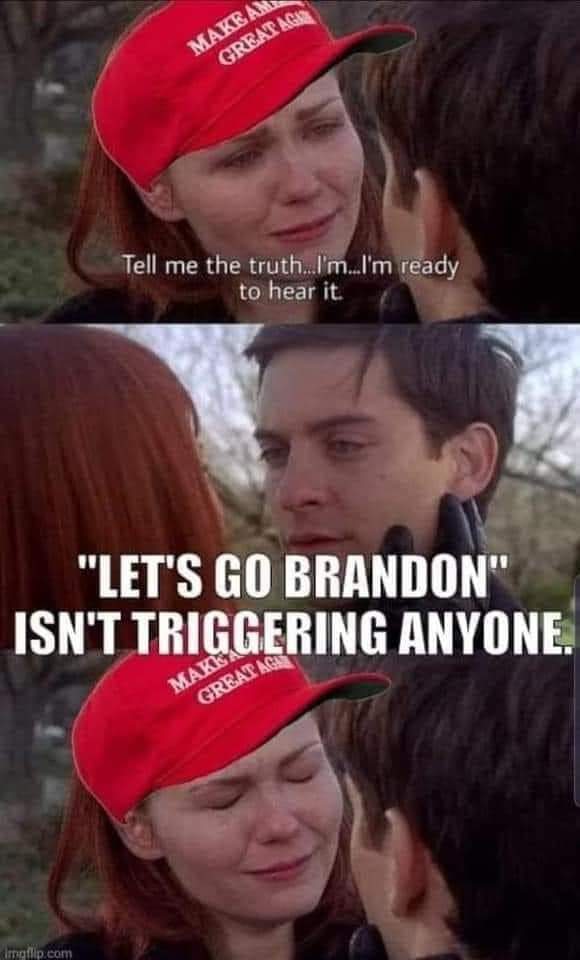 It seems to be triggering you

Im just wondering how dumb someone has to be to think "Lets Go Brandon" is clever.

From what I can see, it's getting a lot of coverage in liberal media as something that, at best, should offend us. And at worst, it's some kind of threat. Oh yeah. There is lots of triggering happening, for sure.

Former FBI agent equates “Let’s Go Brandon” chants to terrorism, but does she really know what she is talking about?

My suggestion is, ''If you dumb fucks think that LA/LB congestion is a problem come on over here''..

Or...."Let's Go Xi" I would think that with that many ships they could spell it out properly in Mandarin.