A national political campaign is better than the best circus ever heard of, with a mass baptism and a couple of hangings thrown in. ― H.L. Mencken

The time has arrived to end this thing. I think I can safely predict the following and when. Unless you are one of those that think the republicans have a shot at California or the democrats have a shot at Alabama, which would certainly undermine this elections's integrity. Texas is looking legitimately close and that could turn a few eyes as well.

The rest is dependent on probably some lengthy counts, court challenges, recounts, etc. A lot was made of how the polls were wrong in 2016 and many were. But how much? The polls I looked at had Pennsylvania and Michigan as toss-ups in 2016, with both states at 46%-44% in favor of Clinton. The polls were off 2.3% and 2.7% for Michigan and Pennsylvania.

I know there is a pollster making waves with their 2016 prediction on Michigan, but they predicted Michigan and Pennsylvania as republican by 4 points. Just don't ask them about Nevada.

Here is the list of "toss-ups" with 2016 final polls; 2016 actual results; and final polls of 2020. Each state is listed with electoral votes, including Maine's 2nd district and Nebraska's 2nd district. 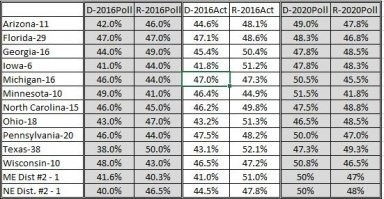 One thing that should pop out regarding the 2016 polls, were the high percentages of voters opting for either a 3rd party or still undecided. They apparently decided on election day 2016. Comparing the stats seems to provide a clue to the eventual winner for this year. You can make up your own mind.

As for the acrimony of this year's election, I realize a lot of people hope it never happens again. I, on the other hand, hope I live to see another presidential election like this. Because it will happen and I would be be around to see it. We each have our priorities. Besides the 2022 and 2024 elections have already begun, just in the very early stages.

I have selected all the Prime movies and tv shows, have my groceries all stocked, etc. I will take socially distancing to new levels over the next week or so.

I've been practicing 'social distancing' for decades.  It is wonderful.

In a sense I admire your dogged pov that it matters not all which candidate wins, and the impression given that they are interchangeable six of one and half a dozen of the other.  But not really.

You have remained neutral though, whatever that's worth in 2020.

I'm not exactly neutral, but I do agree that Trump must be gone. He was going to be gone, regardless of covid or the economy. Once the embarassment is gone, then the policies come into play. You have to give Trump credit for turning the democratic party into the free-trade party, even more than the republicans. The problem is... there is no such thing as free-trade. Trade agreements are nothing more than business contracts that enrich the corporatists of the world, at the expense of the working class or middle class, whichever term you prefer. Of course the word "free" is stuck in front, but "free" is synonomous with good. Corporatists rule both parties. I don't think I would like AOC, but she is correct about "balls".

I set the bar very low... which is why I am rarely disappointed.

Only my opinion of course.

Good on you Baron! btw... that is my favorite all-time election photo.

Thank you for your service! I guess you are not a commie then, LOL!

Nah.  Just another American.  There are so many different kinds of us, but we're all one thing in the end.

Contrary to the opinion and accusations of some of the right-wingers around here, neither am I, nor, in fact, are any in my Chinese family.

You're not 20 anymore, better bring a lawn chair when you vote in case it is a long line.

Thank you for your service!

What ! I don't get any thanks for my service? LOL

I'm not a communist nor am I a cheerleader for communist China like some other NT members are.

a cheerleader for communist China like some other NT members are.

Pardon me but, there are many things about China to be liked that don't have anything to do with their politics or form of government. They are one of the oldest countries in the world, and have contributed many great things to the world itself.

I do not like their politics nor their form of government, but, I have studied much about China as a country overall, and there is indeed much to like, and much to be grateful for that not only benefit America, but, many other countries as well.

And...everyone who likes things about China does not make them a Communist. That is all just political BS.

I will be 73 on Thanksgiving Day.

I agree, there is much to like about China and I didn't say everyone who likes things about China is a Communist. I did say some NT members are cheerleaders for Communist China.

I will be 73 on Thanksgiving Day.

Happy birthday in advance. So why are you still working? you've been getting the maximum Social Security will pay since you were 70.

This is not exactly 2020 election related, but I do hope everyone understands the 2022 elections will likely begin very, very soon and might even make this election look kinda tame.

We have just completed a Census and depending on the final tally, redistricting in probably 14~15 states will take place. This should be interesting. I suspect Gerry Mandering will overtake Donald Trump in the political class thinking.