Jon Levine, The Wrap   46 minutes ago 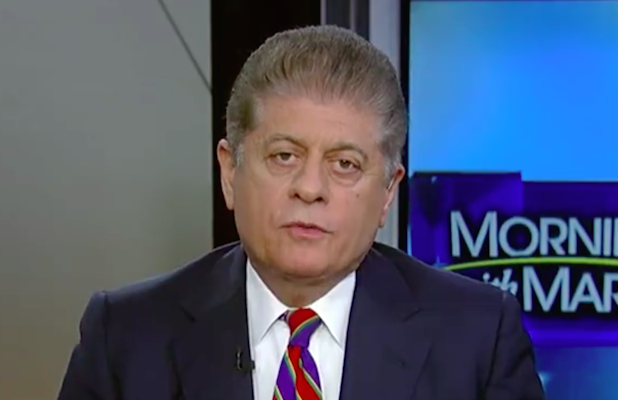 “This is the way you treat your friends? How do you treat your enemies?” the judge said while opening up the segment on Monday morning. “He wanted to divert attention from what Mueller had said about him and what I had commented about Mueller to his relationship with me. His relationship with me is not the story. He and I have been friends for 30 years and probably will be for the next 30 years.”

Still, Napolitano characterized Trump’s attack on him as “brilliant.”

The segment with Bartiromo came after President Trump denounced Napolitano on Saturday, saying the judge had turned nasty because he wasn’t appointed to the Supreme Court.

“Thank you to brilliant and highly respected attorney Alan Dershowitz for destroying the very dumb legal argument of ‘Judge’ Andrew Napolitano,”   Trump tweeted   after a Fox News segment. “Ever since Andrew came to my office to ask that I appoint him to the U.S. Supreme Court, and I said NO, he has been very hostile! Also asked for pardon for his friend. A good ‘pal’ of low ratings Shepard Smith.”

On set, the judge answered both charges — suggesting the president has mischaracterized the matter. Though Napolitano did confirm that he and Trump did have two separate 90 minute conversations in the immediate weeks after his 2016 election victory.

A rep for Fox News did not offer any additional comment on the matter.

Once one of Trump’s favorite Fox News personalities, Napolitano has increasing raised eyebrows on set for his tough commentary on the president’s legal woes. On his Fox News digital series, “Judge Napolitano’s Chambers,” the judge has bluntly called Trump’s behavior documented in the Mueller Report as “criminal.”

“Prosecutors prosecute people who interfere with government functions and that’s what the president did by obstruction, where is this going to end? I don’t know, but I am disappointed in the behavior of the president,”   Napolitano said last week.

Just days earlier, Napolitano said in a   different monologue   on the same program that it was his belief there was enough in the report to “prosecute” the president — even though the special counsel declined to do so.

Read original story   Andrew Napolitano Responds to Trump Twitter Attacks: ‘This Is the Way You Treat Your Friends’   At TheWrap

'But ordering them to break federal law to save him from the consequences of his own behavior, that is immoral, that is criminal, that is defenseless, that is condemnable.”

Get a clue Andrew.  Trump has only one friend.  Trump.

The thin skinned snowflake Trump can dish it out but can't take it....:Poor baby....

Perhaps Mr. Napolitano should choose his friends a bit more carefully next time.

SteevieGee is correct.  The Trump has no friends.  Only that which he can use, cheat or steal from.