The annual White House Correspondents’ Association dinner took a somber turn on Saturday night, with talk of journalists receiving death threats and their families living in fear amid ongoing attacks against members of the media, both abroad and in the U.S.

Olivier Knox, the WHCA’s president and chief Washington correspondent for SiriusXM radio, hosted the gathering in Washington and highlighted journalists “who are suffering for their craft” while pointing a particularly dark spotlight on   President Donald Trump.

“I don’t want to dwell on the president. This is not his dinner, it is ours, and it should stay ours,” he said. But he added that he felt compelled to touch upon Trump’s animosity toward the media and the dangers that has created for journalists.

He said that his young son was distraught enough to wonder at one point if Knox would be imprisoned by Trump. 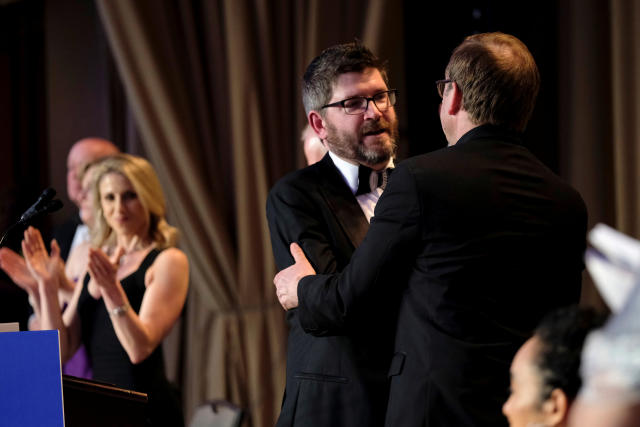 Knox said that his more than 20 years as a journalist have been marked by two distinct periods. The first included its fair share of challenges, he said, including threats on his life as a foreign correspondent and threats to his career made by both Republican and Democratic political administrations in the U.S. But such incidents pale in comparison to the hostility Trump displays toward reporters and the acrimonious environment that he has created, he said.

“And that’s because February 2017 is when the president of the United States called us the ‘enemies of the people,’” Knox said. “A few days later I was driving my then-11-year-old son somewhere, probably soccer practice, when he burst into tears and asked me, ‘Is Donald Trump going to put you in prison?’”

Not long after, he said his son assured him that if he’s ever thrown out of the U.S., one of the family’s relatives, who’s “a really good lawyer,” would be able to get him back into the country.

“I’ve had to tell my family not to touch packages on our stoop,” Knox added. “I’ve had death threats, including one this week. Too many of us have. It shouldn’t need to be said in a room full of people who understand the power of words, but ‘fake news’ and ‘enemies of the people’ are not pet names, punchlines, or presidential,” he said to loud applause.

Trump has routinely used such terms to mock and criticize the press and repeated them at a rally in Green Bay, Wisconsin, on Saturday,   telling his audience:  “Fake news. They’re fake! They are fake. They are fakers!”

Previous presidents have almost always attended the correspondents’ dinner, where they have gotten their chance to lob some good-natured jibes at the media. But, as he did this year, Trump has made a point of skipping the event as president. And in a further escalation of his animus toward the media, the White House also   reportedly banned other administration officials   from attending Saturday’s dinner.

It shouldn't need to be said in a room full of people who understand the power of words, but 'fake news' and 'enemies of the people' are not pet names, punchlines, or presidential. Oliver Knox

In another break from tradition, the WHCA decided that the featured speaker at this gathering would not be a comedian speaker. That role was filled instead by historian Ron Chernow, who penned the famed 2004 biography of founding father Alexander Hamilton that inspired the smash Broadway musical “Hamilton.”

Like Knox,   Chernow used a portion of his speech  to rebuke the White House’s treatment of the press.

“The thing that worries me most is the sustained assault on truth,” Chernow said. “What is happening today is ... a relentless campaign against the very credibility of the news media.”

It's the Rump turd who is the purveyor of fake news.