With 10,000 lies to his name , Donald Trump is a pro at putting out false or misleading information. Unfortunately, many of the people who are tasked with informing the public are inadvertently helping him do just that.

A new study from the journalism watchdog organization Media Matters for America (MMFA) has found that news outlets frequently amplify Trump’s falsehoods by putting uncontested Trump claims that haven't been fact-checked in tweets.

How frequently does this occur, precisely? According to the study, 35 percent of the time, major media outlets amplify, rather than report and contest, a false Trump statement — that’s an average of 19 times per day. 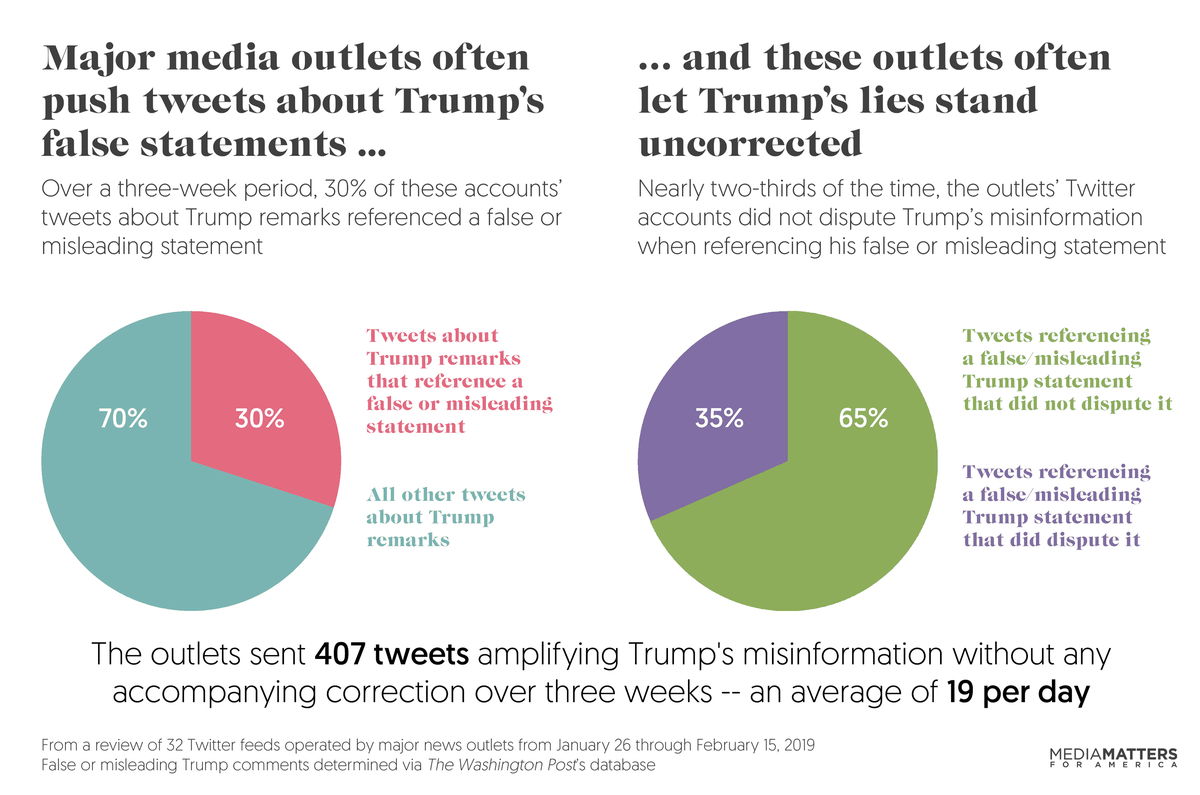 These findings are concerning even when the Trump claims are refuted in the body of articles because readers often read tweets (and headlines) rather than full articles . So when a media outlet merely reports on the statement in a tweet or headline, that could be the sum of the reader’s understanding — thereby propagating Trump’s lies.

The study examined over 2,000 tweets sent out from 32 Twitter accounts belonging to major news outlets. All tweets were sent between January 26 and February 15, the period of time from the end of the 2018 federal shutdown to the final agreement, and Trump’s declaration of a national emergency at the border.

Of all the tweets about Trump's statements, 30 percent referenced something he said that was false and misleading. Of those tweets, 35 percent did not refute the false statement. That’s a total of 407 tweets that amplified, rather than corrected, Trump’s misinformation — an overall average of 19 tweets per day during that stretch of time.

The outlets analyzed included wire services like the Associated Press and Reuters, network outlets and television shows like NBC and ABC, newspapers like the New York Times and Washington Post , and online publications like Politico and The Hill. The Washington Post had the best track record, simultaneously reporting on and correcting Trump’s statements, 89 percent of the time. The Hill was the biggest offender, repeating Trump’s false claims with no correction 88 percent of the time.

Of course, only 8 percent of Americans are on Twitter (based on Twitter’s most recent user numbers ). But the tweets these outlets send could reflect how they’re presenting the news in headlines and elsewhere. That’s concerning since research has shown that reading headlines and social media, not full stories, is a common way people get their news; one recent study from the American Press Institute found that, in the past week, 60 percent of Americans had not delved deeper into a story than the headlines.

This means that, through the power of repetition , not only might media outlets be helping Trump spread lies — they could be cementing those lies as truth in the minds of readers.

I sometimes wonder about the people who believe everything Trump says.

Namely, what the hell is wrong with them?

Many of us don't do social media and pay no attention to what he says. Nor believe anything you say.

And truthfully, Trumps fibs and his stretching of the truth is pretty benign compared to what the Democrats were and are doing.

No one told more lies that HRC.

Trumps fibs and his stretching of the truth is pretty benign

And truthfully, Trumps fibs and his stretching of the truth is pretty benign compared to what the Democrats were and are doing. No one told more lies that HRC.

This is the sort of thinking that is ruining this country.

No one told more lies that HRC

That would be a LIE!  Told you protecting and believing a liar would have an impact on the ability to discern the truth!   But do feel free to try to prove your point if you want to waste some time.

So first you pretend you pay no attention to what Trump says ... then you claim his lies are benign.

You can't have it both ways.  I think you ignore what he says since he's proven to have lied more than any other President; that way you can claim ignorance instead of realizing that you're defending a pathological liar.

It's a shame that Trump's supporters apparently don't give a crap about ethics or honesty, all they have is their DLS ... screeching "but Hillary" at every moment.

But do feel free to try to prove your point if you want to waste some time.

Some people are incapable of proving anything. Or not interested.

Repeating the lie still means it is a lie. There needs to be a change in how the media presents reality.

I think all "news" programs and "opinion" programs need to be labeled accordingly, just like Movies are rated.

A disclaimer regarding the content. "Pundit/Opinion", "Real Time/Breaking News", etc. Label what consumers are actually getting.