As thousands of protesters flooded the streets of London to rally against President Trump’s state visit to the U.K., Trump dismissed reports of the demonstrations as “fake news” and “very, very small.”

When asked by a Sky News reporter about a  protest rally at Trafalgar Square , Trump, holding a joint press conference with British Prime Minister Theresa May, responded, “I don’t see any protests.” 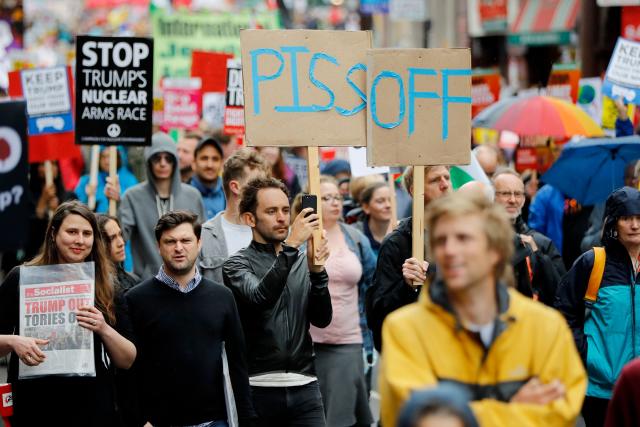 Over two dozen anti-Trump protests were planned throughout London for the president’s visit. They included a British protest group  projecting  a red MAGA-esque cap with the words “USS John S. McCain” on Madame Tussauds wax museum and an image of Trump’s  approval ratings  beside those of his predecessor, former President Barack Obama.

Instead of protesters, Trump said he had seen people waving American and British flags, describing the scene as “an alliance.”

“And then I heard that there were protests,” he said. “I don’t see any protests.” 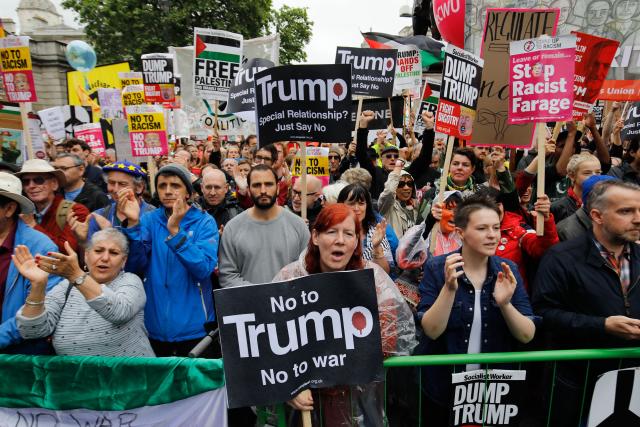 He added: “I didn’t see the protesters until just a little while ago, and it was a very, very small group of people put in for political reasons. So it was fake news.”

There was audible “booing” as Trump and May exited 10 Downing St. for their short walk to the courtyard where their press conference was held.

PHOTOS: ‘Trump Baby’ blimp and a robot featured at protests in London >>>

But in London, while there were  fewer participants  than during Trump’s last U.K. visit in 2018, which gathered upward of 250,000 protesters, rallygoers showed up en masse and  and flew  a giant “Trump baby” balloon over Parliament Square as they protested the president’s immigration policies, stance on the Paris Agreement on climate change and insults of  London Mayor Sadiq Kahn  and  Meghan Markle  prior to and during his visit.

A woman posing as the Statue of Liberty stands next to the “Trump baby” balloon as anti-Trump protesters gather in Parliament Square on Tuesday. (Photo: Matt Dunham/AP)

As thousands of protesters flooded the streets of London to rally against President Trump’s state visit to the U.K., Trump dismissed reports of the demonstrations as “fake news” and “very, very small.”

My understanding is that although there were fewer protesters than the last time Trump was in Britain, there were still tens of thousands of protesters today.  Trump claimed that there were more people supporting him on the streets, which by all accounts is completely untrue.

This fellows seemingly inexhaustible ignorance is quite well, exhausting.

This is getting way outside the margins, it surely cannot be real, I'll put it off to acid flash and just ride it out.