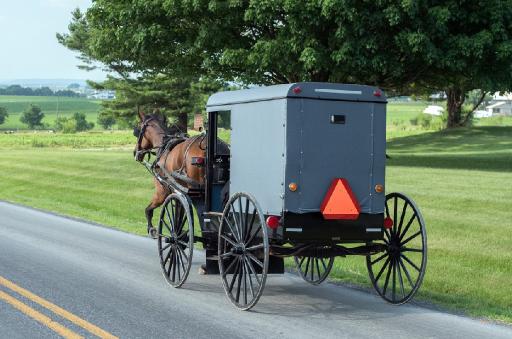 Two young Amish children were killed when a drunk driver in a pickup truck plowed into their family’s horse-drawn buggy in Michigan, according to a report Saturday.

A 2-year-old and 6-year-old died Friday when a pickup truck rear-ended the carriage, which was traveling on the side of a highway in the central town of Marshall, Michigan State Police Sgt. Todd Price   told ABC News .

All seven people in the carriage, including five children and two adults, were thrown from it, according to the report.

Two kids, ages 3 and 4, and an adult woman were also critically injured.

The unnamed driver was intoxicated at the time of the accident, Price said. He is being held in Branch County Jail.

Besides the Amish family suing the ass off him (hopefully he's insured and not a deadbeat) what do you think would be a suitable penalty for that son-of-a-bitch?

Depends where you are travelling but I see a lot of Amish buggies in Michigan. Unfortunately people plowing into them is becoming a common occurrence. I would think it is a result of distracted driving as in people playing with their damn phones. 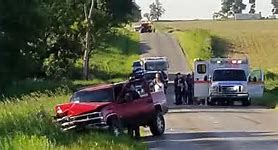 Murder might require proof of intent and a good lawyer could get him off that.  I think negligent homicide, if such a charge is available there.

I know what would be suitable, but what he's likely to get isn't even close to that.

Murder might require proof of intent and a good lawyer could get him off that.  I think negligent homicide, if such a charge is available there.

Negligent homicide is available in Michigan Buzz, but it's a high court misdemeanor.  It is generally used when the person made a mistake that caused a death with no aggravating factors.  A prime example would be a violation of the basic speed law (such as driving at the posted limit but too fast for visual conditions to allow you to stop in time).  Maximum penalty for that would be four years in prison, but quite often the sentence is a large fine, time served and probation.

Negligent homicide is rarely used when alcohol or drug use is involved.  That is an aggravating factor that jumps the charge to Manslaughter.  Manslaughter is a felony with the usual penalty being 7-15 years per count.  Unlike the two levels of murder, the required elements for manslaughter do not include intent; merely having a willful and wanton disregard for the life of the victim is sufficient for conviction.  The alcohol or drugs supply sufficient evidence of disregard.  Lately, the courts have begun considering voluntary distractions such as texting as evidence of such disregard, although it's still at the discretion of the indicting judge.

My thought is that anyone who is so distracted (or high) that they hit a large buggy with a big blaze orange triangle on the back (such signs are required on all slow moving vehicles including Amish buggies and farm equipment), that person would be far more likely to hit a couple of kids walking or riding bikes along the road since they're not nearly as visible.  Such a person needs to be locked away for a long time, so that they can no longer hurt anyone else.

Thanks for the info, Rock.  I guessed negligent homicide because I'm not up on criminal law.

That's 25 to life per child fatality with zero chance of parole. In essence two concurrent life sentences not including sentences for the survivors.

I just read in another report that a third child has died...

It sure as hell does.

That's mass homicide - there should be worse than a prison holiday imposed.  I was thinking hard labour - used to be chain gangs.  In fact at first I thought of making him do all the dirty and hard labour on the victim's farm, but then it's probably a mistake to put him anywhere close to his victims.  Seriously, just being separated from society and put into prison regime is NOT enough of a punishment.