Elizabeth Warren gains momentum in the 2020 race plan by plan

The senator’s ‘I have a plan’ mantra has become a rallying cry as she edges her way to the top – but is it enough to get past the roadblocks of Biden and Sanders? 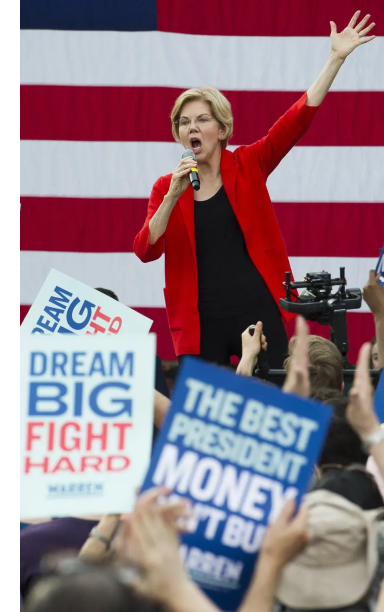 Plan by plan , Elizabeth Warren is making inroads and gaining on her rivals in the 2020 Democratic race to take on Donald Trump.

The former Harvard law professor’s policy heavy approach made an impression among activists at the She the People forum in Texas last month and was well-received at the California state party convention earlier this month.

This week a Morning Consult poll saw Warren break into the double digits at 10%, putting her in third place behind Bernie Sanders and Joe Biden. A recent Economist/YouGov poll found Warren was making gains among liberal voters, with Democrats considering the Massachusetts senator for the Democratic presidential nomination in nearly equal measure with Sanders.

Her intense campaigning on a vast swathe of specific issues has achieved viral moments on the internet – even including one woman whom Warren advised on her love life – as well as playing well during recent television events.

At a televised town hall in Indiana this week, Warren listened intently as a woman who voted for Trump in 2016 described her disillusionment – not only with a president who failed to bring back manufacturing jobs as he said he promised but with an entire political system stymied by dysfunction.

“I feel duped,” said the voter, Renee Elliott, who was laid off from her job at the Indianapolis Carrier plant. “I don’t have a lot of faith in political candidates much anymore. They make promises. They make them and break them.”

Warren rose to her feet. “The thing is, you can’t just wave your arms,” the she said, gesturing energetically. “You’ve really got to have a plan – and I do have a plan.”

That mantra – a nod to the steady churn of policy blueprints Warren’s campaign has released – has become a rallying cry for Warren as she edges her way to the top of the crowded Democratic presidential primary field.

But despite the burst of momentum, Warren’s path to the nomination has two major roadblocks: Sanders and Biden. Her success will depend on whether she can deliver a one-two punch: replacing Sanders as the progressive standard bearer while building a coalition broad enough to rival Biden.

Warren began that work this week with a multi-stop tour of the midwest designed to show her strength among working class voters who supported Trump. Ahead of the visit, Warren unveiled a plan she described as “economic patriotism”, which earned startling praise from one of Trump’s most loyal supporters.

“She sounds like Donald Trump at his best,” conservative Fox News commentator Tucker Carlson told his largely Republican audience as he read from Warren’s proposal during the opening monologue of his show this week. The plan calls for “aggressive intervention on behalf of American workers” to boost the economy and create new jobs, including a $2tn investment in federal funding in clean energy programs.

His praise was all the more surprising because Warren has vowed not to participate in town halls on Fox News, calling the network a “hate-for-profit racket that gives a megaphone to racists and conspiracists”.

The debate over whether Democrats should appear on Fox News for a town hall has divided the field. Sanders, whose televised Fox News town hall generated the highest viewership of any such event, argued that it is important to speak to the network’s massive and heavily Republican audience.

As Warren courts working-class voters in the midwest, she continues to focus heavily on the early states of Iowa and New Hampshire. After jumping into the race on New Year’s Eve 2018, Warren immediately set to work , scooping up talent and building a massive operation in Iowa. Her campaign is betting a strong showing in the first in the nation caucuses will propel her in New Hampshire, which neighbors Massachusetts, and then boost her in Nevada and South Carolina.

But as Warren gains momentum, moderate candidates are becoming more vocal about their concern that choosing a nominee from the party’s populist wing will hand Trump the election.

“If we want to beat Donald Trump and achieve big progressive goals, socialism is not the answer,” former Colorado governor John Hickenlooper told Democrats in California last weekend. Though his comments were met with boos and jeers among the convention’s liberal crowd, his warning is at the heart of the debate over who should be the Democratic presidential nominee.

Warren has pointedly distinguished herself as a capitalist as opposed to a socialist or a democratic socialist, but she has not backed away from a populist platform that embraces sweeping economic reforms.

In her address to the California Democratic party, Warren rejected appeals for moderation.

“Some say if we all calm down, the Republicans will come to their senses,” she said. “But our country is in a time of crisis. The time for small ideas is over.”

Warren has pointedly distinguished herself as a capitalist as opposed to a socialist or a democratic socialist, but she has not backed away from a populist platform that embraces sweeping economic reforms.

In her address to the California Democratic party, Warren rejected appeals for moderation.

“Some say if we all calm down, the Republicans will come to their senses,” she said. “But our country is in a time of crisis. The time for small ideas is over.”

I'm pretty pessimistic about America's chances over the next few years. There are just too many negative trends, from climate-warming to crony kleptocracy.

But I'm intrinsically an optimist, so when I see that some Americans are listening to ideas... and choosing the candidate they believe has the best ideas... I allow myself to hope. Just a little bit.

Now: a little experiment. We have here an article about a candidate who is basing her campaign on ideas. What is the reaction from NT's "conservatives"?

Oh, goody, another wonderful capitalist. As long as politicians are controlled by lobbyists and Citizens United and go with "money is free speech" I don't see where much of anything positive in a big way is ever going to happen. Plans are easy to make and sound good but the plans that don't put money or more money in somebodies pocket are just as easy to stop. Even easier to stop if you're a Capitalist being stopped by Capitalists.

She has some good plans, but what are the chances any of them get passed?

I'll keep watching, but she's going to have to convince me she'll fight hard enough get any of them through.

... she's going to have to convince me she'll fight hard enough get any of them through.

Or else I'll have to wait until some of the other candidates lay out some plans and ideas in case I like one of them better.

There's a lot of time yet. No hurry.

I really love her, but I have been surprised at how much support she is gaining from the right. Tucker on Fox actually praised her common sense approach saying she is the only candidate speaking sense.

However the right wing base that is completely brainwashed by Fox may not get the common sense message that would bring all Americans together.

Nothing is more fitting than those who complain the most about Trump's character flocking to Elizabeth Warren,  the racial con artist.

How many white supremacists has Warren dogwhistled or retweeted ?

Warren is just another massive statist government worshipper.  Control our lives, redistribute what others earned to those who didn't, Marx would love her.