Adam Forrest, The Independent   16 hours ago

The self-avowed white supremacist who ploughed his car into protesters opposing a far-right rally in  Virginia  two years ago, killing one person and injuring dozens of others, has asked a judge for mercy and a sentence shorter than life in prison.

James Alex Fields Jr ’s legal team has argued in a new sentencing memo that the 22-year-old defendant should not spend his entire life in prison because of his age, a traumatic childhood and a history of mental illness.

Fields has pleaded guilty to federal hate crimes in relation to the  Charlottesville  attack and is set to be sentenced on 28 June.

“No amount of punishment imposed on James can repair the damage he caused to dozens of innocent people. But this Court should find that retribution has limits,” his attorneys wrote in a court document submitted on Friday.

Fields’ attorneys said that giving him something less than a life sentence would be akin to an “expression of mercy” and a “conviction that no individual is wholly defined by their worst moments”.

The attorneys highlighted his difficult upbringing and history of mental illness, but many of the details were redacted. The document did reveal he was raised by a paraplegic single mother and suffered “trauma” by growing up knowing his Jewish grandfather had murdered his grandmother before committing suicide.

In their own sentencing memo, prosecutors said Fields had shown no remorse since he drove the car into the counter-demonstrators on 12 August, 2017, killing anti-racism activist  Heather Heyer  and injuring others protesting against the white nationalists.

They argued that Fields deserves a life sentence, adding that would help deter others from committing “similar acts of domestic terrorism”. 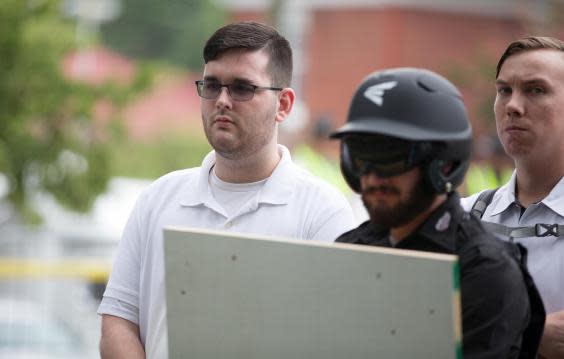 Prosecutors focused on years of documented racist and antisemitic behaviour by Fields, which they said included keeping a picture of  Adolf Hitler  on his bedside table. They also said that he was recorded on a jail phone call making disparaging remarks about Ms Heyer’s mother as recently as last month.

They also argued that while Fields has a history of mental illness issues, it did not excuse his behaviour in a way that would demand a lenient sentence. “Any mental health concerns raised by the defendant do not overcome the defendant’s demonstrated lack of remorse and his prior history of substantial racial animus,” prosecutors wrote.

Under a plea deal, federal prosecutors agreed not to pursue the death penalty against Fields after he pleaded in March to federal hate crime charges and admitted that he intentionally drove his car into a crowd of anti-racism protesters.

The charges he pleaded guilty to call for life in prison under federal sentencing guidelines.

In December last year he was convicted in a Virginia court of first-degree murder and other state charges for killing Ms Heyer and injuring others who were protesting. Sentencing on the state charges is scheduled for next month.

Donald Trump  infamously said there were “very fine people on both sides” of the clashes in the Virginia city.

This little neo-nazi scum deserves no mercy.  The scummy turd was shown mercy by not getting a death sentence.

What mercy did you show to Heather Heyer before you plowed into her and killed her scumbag?

Not going to get into name calling as that seldom does any good. But no, there should not be any reduced sentence. He plea-bargained to avoid the death penalty and was then charged with crimes that warrant a life sentence. According to reports he's shown no remorse or guilt over what he did so there should be no reduction in sentencing.

I don't believe his cellmates will show this nasty whiny little bitch any mercy in prison either.

Throw the scumbag into a dark hole.  Not so cocky now is he.

I wish the prosecutors had gone for the death penalty, but we all know who would have been screaming if we actually put a cold-blooded murderer to death, right?

The racist scum plea-bargained his way out of the death sentence. That's all the mercy he can expect to get and he's lucky he got that! Let him spend the rest of his life behind bars thinking about what he did and what he cost his victim Heather Heyer and her family.

Life with no possibility of parole.

He'll soon be pleading for mercy from his cell mate, Jimmy Horsehung, who will be teaching him all about black supremacy.

At least he will have meals, soap and a tooth brush while he waits for...

death for the rest of his life.

And a cot.  He won't have to sleep on the concrete floor with an aluminum blanket.

I am totally laughing my butt off reading the disingenuous comments from trump's base.  What frocking hypocrites.

I am totally laughing my butt off reading the disingenuous comments from trump's base. What frocking hypocrites.

which posts were those?

Just the numbers would be great!