An Ohio state lawmaker   who blamed mass shootings   on legal marijuana, gay marriage and "drag queen advocates" is sticking by her comments despite calls for her resignation,   according to the Cincinnati Enquirer .

Keller's post blamed a number of sources, including "the breakdown of the American family," "hatred of our veterans" and "snowflakes, who can't accept a duly-elected president." 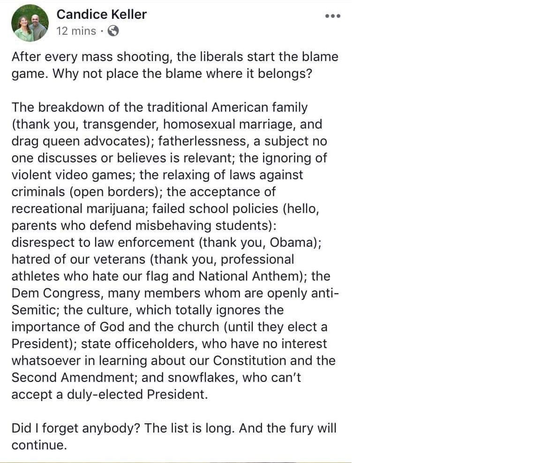 Now, some state politicians are calling for Keller to step down. Ohio Republican Party leader   Jane Timken   called the post "shocking" and asked for Keller's resignation, according to the Cincinnati Enquirer.

"While our nation was in utter shock over the acts of violence in El Paso and Dayton, Republican State Representative Candice Keller took to social media to state why she thought these acts were happening," Timken said in a statement. "Candice Keller's Facebook post was shocking and utterly unjustifiable. Our nation is reeling from these senseless acts of violence and public servants should be working to bring our communities together, not promoting divisiveness."


Timken has reportedly not spoken with Keller directly about a resignation. Keller, who is currently running for the Ohio Senate, responded to the public statement with a refusal to stall her political career.

"Establishment moderates have never been fans of mine because I ran against their endorsement and won," Keller said in a statement. "As the only conservative in this race, I will be taking my Senate campaign to the voters to decide."

Other lawmakers, such as Cincinnati City Councilman  Chris Seelbach , have also spoken out. Seelbach, who was  Cincinnati's first openly gay councilman , specifically took issue with Keller's comments on same-sex marriage. He also urged Ohioans to call Keller directly with their thoughts.

You've got all the 'president's' talking points and dog whistles down pat you crazy bitch!

This gal is obviously a loony toones nut case case who has zero business in elected office!

Talk about your sweeping generalizations!

I do agree that fathers need to be more involved with their children....if they are good fathers. Some are not good fathers and there's a reason they don't belong in the home.

As for the rest of her screed....take a chill pill, Candace. Better yet, why don't you just take a toke on a doobie?

There was some other crazy shit on her FB page about abortion providers getting $750 per abortion and also selling baby parts for profit.

She watches way too much Fox News. Is she a US Congress critter or just a state rep? The state ones tend to be more cuckoo than the US ones

Yet how many of her followers will quote her FB shit as gospel?

probably quite a few...unless she's the Jason Rapert of Ohio. Jason Rapert is a state senator from Conway, Arkansas. I do believe he has more trolls on his face book page than he does people that actually like him. He says some dumbass shit

I believe she is just a state rep.

I could have gone back up and checked the article (I did read it) but I'm lazy. Thanks, Tessy.