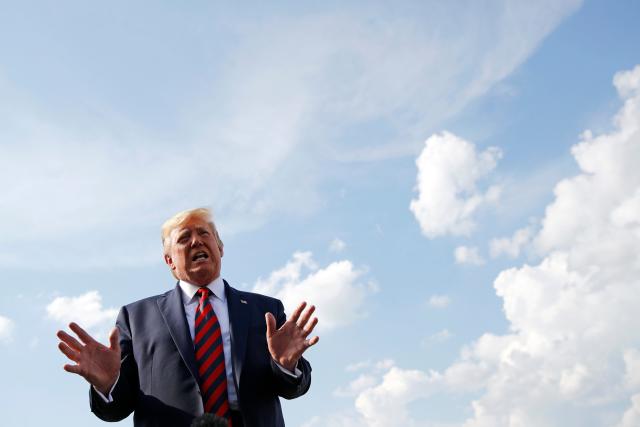 Trump distanced himself from Scaramucci, who had been the White House communications director for 11 days in 2017, saying that "I barely knew him until his 11 days of gross incompetence."

Trump added that Scaramucci "made a fool of himself...abused staff, got fired."

Scaramucci had been   dismissed   from his position in July 2017 after a brief but colorful tenure.

Referring to Scaramucci's book "Trump, the Blue-Collar President," Trump added that Scaramucci, "wrote a very nice book about me just recently. Now the book is a lie?"

More:   Scaramucci on Trump: 'Very clear that it’s impossible for him to win'

Trump has recently escalated his rhetorical war with his former staffer and has called him "totally incapable of handling" his White House job. Scaramucci, for his part, has called for the Republican Party to drop Trump as its nominee, though he has said that he would vote for Trump over a Democrat.

Earlier Monday morning, Scaramucci had appeared on   CNN's "New Day"   to say he was   assembling   a coalition of Republicans to oppose the president.

"I've got to get some of these former cabinet officials in unity to speak up about it. They know it's a crisis. It goes back to things like the Caine mutiny court-martial," Scaramucci, making a reference to a 1954 movie about a mutiny aboard a U.S. Navy ship.

Scaramucci did not respond when asked who the former cabinet officials were, predicting instead a "trove of people" would come together.

This 'president' is a  highly unstable nut job.

"Anthony Scaramucci is a highly unstable 'nut job' who was with other candidates in the primary who got shellaced, and then unfortunately wheedled his way into my campaign," Mr Trump tweeted on Monday morning.

"I barely knew him until his 11 days of gross incompetence-made a fool of himself, bad on TV. Abused staff, got fired" the US president added without providing evidence.

"Wrote a very nice book about me just recently. Now the book is a lie? Said his wife was driving him crazy, 'something big' was happening with her. Getting divorced. He was a mental wreck. We didn’t want him around. Now Fake News puts him on like he was my buddy!"

It would appear they have much in common.

Climbing into my way back machine:

I suppose this would mean that the bloom is off the rose so to speak. If Mr. Trump appointed a "highly unstable" individual to a position, wouldn't that make ............. you know where it leads