Trump is 'not happy' with Fox News over poll results


Trump is 'not happy' with Fox News over poll results


President Trump is 'not happy' with Fox News over poll results


After a series of unfavorable polls from Fox News’ polling unit, President Trump has stepped up his complaints about the network, which he no longer considers a reliable ally.

“There’s something going on at Fox, I’ll tell you right now. And I’m not happy with it,” Trump told reporters Sunday, adding, “Fox has changed. My worst polls have always been from Fox.”

Trump was complaining about  a recent Fox News poll  that showed him down 12 points to former Vice President Joe Biden in a hypothetical 2020 matchup. The poll also showed him down 9 points to  Sen. Bernie Sanders , 7 to Sen. Elizabeth Warren and 6 to Sen. Kamala Harris.

It wasn’t the first time he was annoyed by the network’s polling arm, which is considered a respected and relatively nonpartisan part of the generally conservative and pro-Trump network.

“[Fox News] is at it again,” he tweeted on July 26. “So different from what they used to be during the 2016 Primaries, & before - Proud Warriors! Now new Fox Polls, which have always been terrible to me (they had me losing BIG to Crooked Hillary), have me down to Sleepy Joe.”

At that time, Trump was complaining about  another poll  that showed Biden up 10 points in a hypothetical general election race. This month, the president has also tweeted insults about analyst Juan Williams (“always nasty and wrong”) and anchor Shepard Smith (“Watching Fake News CNN is better”). He said he preferred the coverage of Fox’s conservative rival, One America News Network. 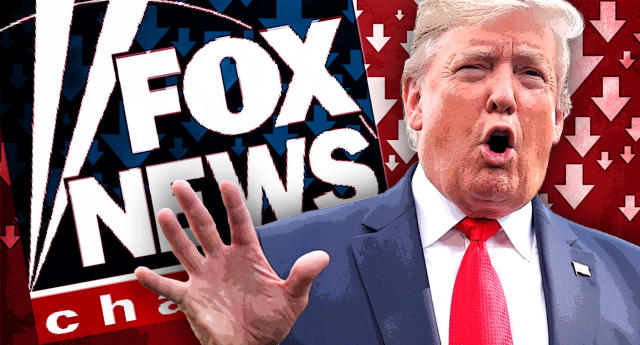 He has also objected to the network hiring as a commentator Donna Brazile, a former interim chair of the Democratic National Committee. “The wonderful woman that gave Hillary Clinton the questions,” he said Sunday, referring to a minor scandal during the 2016 primaries when Brazile gave the Clinton campaign advance notice of a question that would be asked at a televised debate. “That was a terrible thing. And all of a sudden, she’s working for Fox. What’s she doing working for Fox?”

Trump’s administration has had extremely close relationships with Fox News and Fox Business.   Sean Hannity   and  Tucker Carlson  have served not just as boosters to Trump, giving him cozy interviews and promoting his policies, but also as advisers. The third member of Fox News’ primetime lineup, Laura Ingraham,  spoke at the 2016 Republican National Convention  in support of Trump and was  under consideration to be his first press secretary .  Hope Hicks  and  Raj Shah , former Trump White House communication officials, are now vice presidents at Fox Corporation.

As president, Trump has frequently repeated talking points from the morning news show “Fox & Friends.” At one time it was reported he  spoke regularly  with Hannity. But last week, followers of Trump’s Twitter feed noted a rare  implied criticism of Hannity  over the host’s taking the side of CNN anchor Chris Cuomo in a dispute with a heckler.

An earlier break with Fox News occurred in April,  when he fumed at the network  hosting a town hall for Sanders. The town hall, which received  high ratings  and saw Sanders getting the crowd to  support his Medicare for All health care proposal , left the president displeased.

“Many Trump Fans & Signs were outside of the @FoxNews Studio last night in the now thriving (Thank you President Trump) Bethlehem, Pennsylvania, for the interview with Crazy Bernie Sanders,” Trump tweeted. “Big complaints about not being let in — stuffed with Bernie supporters. What’s with @FoxNews?”

Other polling organizations have shown Trump losing support on important issues, making the Fox News polls showing him losing hypothetical matchups to the top Democratic contenders appear plausible.  An NBC News/Wall Street Journal  poll released Sunday showed half of Americans disagreeing with Trump’s response to the recent mass shootings in El Paso, Texas, and Dayton, Ohio, with 54 percent saying he bore some responsibility for the attacks.  A July poll from Quinnipiac  found that 51 percent of Americans thought he was racist.  His overall approval rating  is hovering around 42 percent, consistent with where it’s been for the last year save for a dip during  the record-breaking government shutdown .

I heard they also dumped Pirro, another one of the 'president's' supporters.

Awww, the big baby is unhappy.  Would someone please shove a cheeseburger pacifier in his mouth so he will STFU.

Trump is 'not happy' with Fox News over poll results