Donald Trump says he's not considering tax cut package, just one day after saying he was


Donald Trump says he's not considering tax cut package, just one day after saying he was

WASHINGTON – President Donald Trump said Wednesday he is not considering tax cuts to help stimulate the economy, just one day after saying his administration was looking at a temporary reduction in   payroll taxes   and other proposals amid fears of a recession.

“I’m not looking at a tax cut now,” Trump told reporters at the White House as he was leaving for an event in Louisville, Ky. “We don’t need it.”

Trump insisted the economy is doing “very, very well” despite warnings from private economists about the threat of a U.S. recession. He again attacked Federal Reserve Chairman   Jerome Powell   for failing to go along with his demand for lower interest rates.

“The Federal Reserve has let us down,” he said. 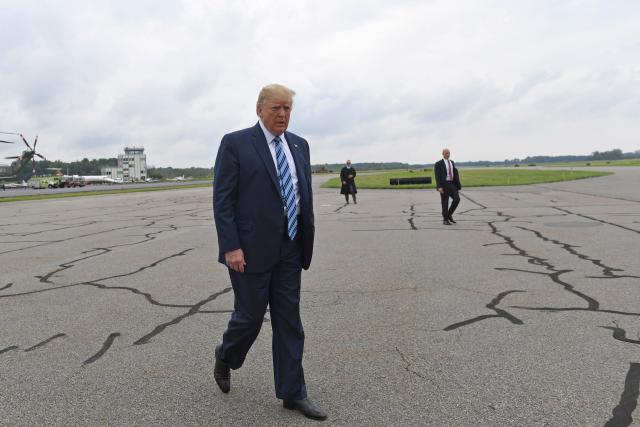 Though Trump has repeatedly insisted the economy is strong, senior White House officials already have started preparing a contingency plan, including a temporary payroll tax cut, to put more money in workers' paychecks and boost growth.

Trump, however, backtracked Wednesday on a tax-cut package.

Indexing capital gains to inflation would probably be better for upper income groups, he said, “but I’m not looking to do that.”

Trump:   Russia should be invited back to the elite G7 club of industrialized countries

Private economists are warning there are signs of a possible recession on the horizon, pointing to trade tensions between the U.S. and China, weaker growth abroad and yields on 10-year Treasury bonds that dipped below two-year Treasury rates last week, a phenomenon known as an inverted yield curve.

It's the first time that has happened since 2007 and could indicate investors have lost faith in the soundness of the U.S. economy.

Correction you lying scumbag, you and your wealthy cronies DON'T NEED IT.  The lower and middle class DO.

If back peddling were an Olympic event, he would bring home the gold.

Same thing with the background checks, now all the sudden he isn't in favor of them.

But speaking of tax breaks... When are those 10% tax cuts for the middle class that trump promised days before the mid-terms?

You surely don't think he meant that do you?

Whatever the NRA is not in favor of, Trump won't be either.

This guy is the biggest waffler, ever.