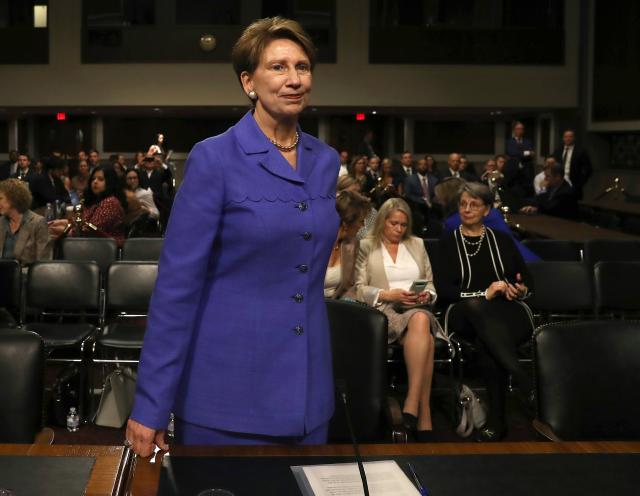 During a tense  exchange  with Sen. Richard Blumenthal (D-Conn.), Barbara Barrett refused to tell the Senate Armed Services Committee whether she thinks it is inappropriate for Air Force personnel to spend government funds at Trump-owned businesses. A recent  report  from Politico detailed numerous instances in which air crews lodged at the president’s struggling Turnberry Resort in Scotland as they traveled from the U.S. to the Middle East.

“It seems that we should have generic rules and regulations that look to the best value and the best acquisition, and those rules should be enforced equally,” Barrett said. She added that such rules wouldn’t be “specific to any particular owner.”

When Blumenthal asked specifically about presidential self-dealing and pressed Barrett on the possibility Trump is violating the Constitution by the ways in which money is flowing to his properties, Barrett repeated her comment about the need for generic rules and regulations.

Barrett told Blumenthal she would comply with his request for a “complete accounting” of Air Force expenditures at Trump properties if she wins Senate confirmation to the branch’s top position.

In a Sept. 9 tweet, Trump denied having anything to do with members of the Air Force staying at his hotel in Scotland ― while adding that they had “good taste” in doing so. 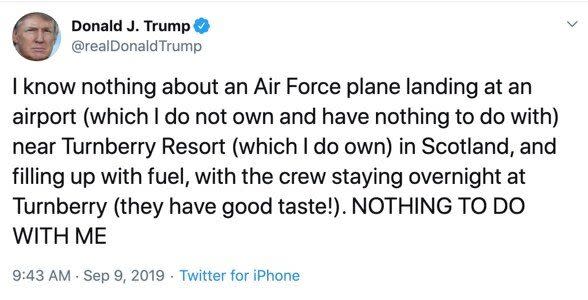 The Air Force has since  launched an investigation  into how it chooses airports to land at and lodging accommodations during international travel.

Ethics watchdogs and Democrats in Congress have been sounding the alarm about Trump potentially using the presidency to enrich himself, given that he refused to divest himself of his business holdings upon taking office. Several reports have detailed instances in which  foreign governments ,  U.S. companies  and  U.S. officials  have spent money at Trump’s resorts since he became president.

The practice was spotlighted last month when Vice President  Mike Pence  stayed at the Trump resort Doonbeg, Ireland, while on a state visit to that country. The hotel is 180 miles from Dublin, where Pence’s meetings with Irish leaders took place.

Two lawsuits were filed charging that Trump has violated the Constitution’s “emoluments” clause, which prevents federal officeholders from accepting payments from foreign governments without congressional consent. One of those suits was  dismissed in July   by a federal appeals court panel.

Trump picked Barrett, a former aerospace executive and diplomat, to replace Heather Wilson, who resigned as the Air Force chief earlier this year to become president of the University of Texas at El Paso.

Of course, which is why she's the nominee.  How much is she being paid to say that?  Bitch.

Yep, that is the key word right there.....HIS.  I never would have been against the stay at the resort if Trump had just said No Charge for either the lodging or food.  I would have viewed it as doing something decent for the NG and gave him a very rare Atta Boy.

if Trump had just said No Charge

He's not running the company right now, so he's not in a position to say anything about what they are charged.

yea, and i'm sure NOTHING is EVER discussed between his sons and he...

Trump is directing our tax dollars towards his bank account, plain and simple.

I'd be plenty upset about this stuff if there was actual evidence of wrongdoing, but so far there isn't. It's just a lot of wild accusations and innuendo from partisan opponents.

I'd be plenty upset about this stuff if there was actual evidence of wrongdoing, but so far there isn't.

Back in 2014, soon after acquiring a golf resort in Scotland, Donald J. Trump entered a partnership with a struggling local airport there to increase air traffic and boost tourism in the region.

The Department of Defense (DoD) has spent more than $17 million on fuel at Scotland’s Glasgow Prestwick Airport since US president Donald Trump’s election, according to federal spending data. That’s a 100% increase from what the DoD spent at Prestwick before Trump’s election, the records show, and about $6 million more than the House Oversight and Reform Committee is now reportedly investigating as a conflict of interest and possible Constitutional violation.

Earlier this month, we learned the Pentagon was investigating the curious case of Air Force members patronizing Donald Trump’s Scottish golf course after refueling at a nearby airport rather than a military base, which would have been cheaper.

Would you care to provide evidence of the Air Force using Trump owned properties BEFORE he became POTUS?

Why should I? I never claimed they did or did not.

You got something against that airport? Is there some reason they shouldn't use it?

If you have links of cause and effect between Trump's actions and some kind of corruption, then by all means produce it so we can all see it. But so far, all you have presented is coincidence and the innuendo I mentioned above.

Well hot fucking damn.  Who would have thought that Prestwick got contracts with the US Military under the auspices of the OBAMA administration.   So, how much more wrong can you prove to be, again?

] Since November 2013, when the Scottish government took control of the facility, service contracts have been established with the USAF , USN , USMC , Defense Logistics Agency and National Guard . [9]

Well hot fucking damn.  Who would have thought that Prestwick got contracts with the US Military under the auspices of the OBAMA administration.   So, how much more wrong can you prove to be, again?

Meaningless, we have military contracts worldwide for use of airports.

Care to explain why the use of that particular airport has doubled under Trump?

Care to explain why, under Trump, military personnel are being sent to a Trump owned hotel instead of the nearby military base like they did under previous administrations?

He owns the golf resort....his own words.

It's hard to see how American servicemen would qualify as a "foreign government."

Well, to a great deal of progressive leftist liberals, the United States military are just like foreigners who do not speak the same language....

It's funny listening to Liberals bitch and moan about the "emoluments clause" when it comes to Trump ….. but they "Conveniently" forget that Trump came into Washington as an "-aire", where the others in congress always seem to come out of Washington as "-aires".

The only airs that Trump exhibits is when he lets one.