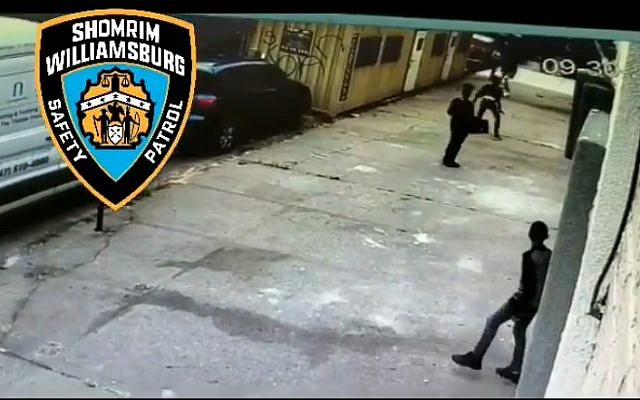 Vandals break the windows of the Rivnitz synagogue in Brooklyn during Rosh Hashanah services on September 30, 2019. Screen capture: Williamsburg News)


The windows of a synagogue in Brooklyn were smashed by vandals this week during Rosh Hashanah services.

A video showing people throwing milk crates at the Rivnitz synagogue in the Williamsburg neighborhood was circulated Wednesday on social media.

Police said that the incident took place on Monday afternoon and they were searching for two females who were seen in the video, according to WPIX-TV.

“This is a shocking act of hate,” he wrote on Twitter. “We WILL find the perpetrators and hold them responsible.”

The Anti-Defamation League said it was “deeply disturbed” by the video.

“At a time when the Brooklyn Jewish community is already on edge in the wake of a series of anti-Semitic incidents, it is extremely upsetting to see this congregation targeted during what is otherwise supposed to be a joyous celebration of the Jewish New Year,” Evan Bernstein, the regional director of the organization’s New York-New Jersey office, said in a statement.

There has been a spate of attacks in recent months against visibly Orthodox Jewish men in Brooklyn.

I don't think so, Buzz. It is bigotry, but more complex than that.

Krystallnacht was the name given to the night of terror perpetrated by the Nazis in Germany against the Jewish places of business and worship by the smashing of their windows.  The incident related here was one of smashing the windows of a Jewish place of worship, and is therefore reminiscent of the original terror, notwithstanding WHO did it.

Perrie, was this not reported by any of the local media?  I saw no American source, and it took an Israeli source to report it.

As for if this was covered by American papers, of course it was.

When I did a search the seed was the only report of the incident on line.

Very disturbing, but Williamsburg has been having a lot of issues for a very long time. There are two competing communities there and they don't seem to get along. The Satmar Jews that live there don't even get along with other Jews since they are anti Israel. I don't condone these kinds of actions, but I do know the dynamics of the area and i think this could just be about bad feelings between groups rather than straight up antisemitism.

I guess we'll know the answer as to motive when the perpetrators are caught and their identity is established.

when the perpetrators are caught and their identity is established.

"Which brings us to the ultra-Orthodox Jews in Brooklyn. The attacks against the Jews of Crown Heights, Williamsburg and Boro Part are serious and growing more frequent.

Jews walking down the streets are beset by assailants who call them “Dirty Jew” and beat them with sticks and fists. Jews are sideswiped with bricks. Jewish women are assaulted, their head coverings violently removed. Synagogues are vandalized.

The violence against the Jews of Brooklyn is reminiscent of the black community’s violent pogrom against the Jews of Crown Heights in 1991. In August 1991, more than 180 members of the Chabad community were injured in a three-day, four-night pogrom carried out by African and Caribbean American rioters. Yankel Rosenbaum, a visiting student from Melbourne, Australia was brutally beaten and stabbed to death.

One of the main black leaders who incited the pogrom was Rev. Al Sharpton, the self-styled civil rights leader. Despite the fact that Sharpton never apologized for stirring up the mass violence against the Jews and then maintaining it for days after it first began, over the past decade, Sharpton has risen in stature in the Democratic party to the point where Democratic presidential hopefuls make pilgrimages to him in the hope of securing his endorsement. MSNBC gave him a show.

And, in recent months, as the Jews of Crown Heights again absorb blows from their African American neighbors, the Reform Jewish movement has joined Sharpton’s fan club."

I guess I'm left to respond. Buzz, I think your'e on to something!

That was one indication of who the perpetrators might be, which was not Perrie's opinion.

I know. That is why I responded the way I did.

It is one very valid indication, but as you say, we won't know until and unless somebody is caught.

The one in Williamsburg is hard to tell what is going on. That particular sect of Jews is very hostile to even other Jews, so until an investigation is done, there is no way to know who did it or why.

The one is Crown Heights started with the accidental death of a young black boy by a Chabad member backing up. Rev. Al made that mess. The area has always been tense due to housing issues between the Jewish Chabad members and the black community, but Sharpton made it worse.

As for reform jews embracing Sharpton, I think you need to read this, from the oldest and also liberal reform paper:

Thanks for posting that for me.  However, I'm going to use a word Coretta King used in speaking with Sharpton.  When it comes to Sharpton, "Talk is cheap."

You have no idea how I feel, especially because of my son, about the direction of the Reform movement, especially considering the psalm:  "Should I forget thee, O Jerusalem, may my right hand wither and my tongue cleave to the roof of my mouth."

But Buzz, that is why I posted that article. To show you that the orginal article didn't do the reform movement any fairness. Yes, talk is cheap, but it's still better than not apologizing and not as good as action. Anyway, isn't this the time of year for forgiveness? (you do that as much for yourself as you do it for others).

I have lost faith in the Reform movement - my Zionism supersedes it.  My right hand has not withered and my tongue does not cleave to the roof of my mouth.

They love to attack on the Holy Days.

Indeed Dave. Nothing ends a Yom Kipper quicker than a war.