Drake tweeted that he planned to buy an assault rifle "because if you impeach MY PRESIDENT this way, YOU WILL HAVE ANOTHER CIVAL WAR!!! #MAGA2020"."

Major League Baseball is looking into a now-deleted tweet from umpire Rob Drake warning of a civil war if president Donald Trump is impeached.

According to   a copy of the tweet obtained by ESPN , Drake tweeted that he planned to buy an assault rifle "because if you impeach MY PRESIDENT this way, YOU WILL HAVE ANOTHER CIVAL WAR!!! #MAGA2020"."

MLB said in a statement to USA TODAY Sports that the league became aware of the tweet Wednesday and is now investigating the matter.

Messages included a claim that Barack Obama was not born in the United States and a tweet to Hillary Clinton calling her an "(expletive) liar," demanding the truth about "#benghazzi." 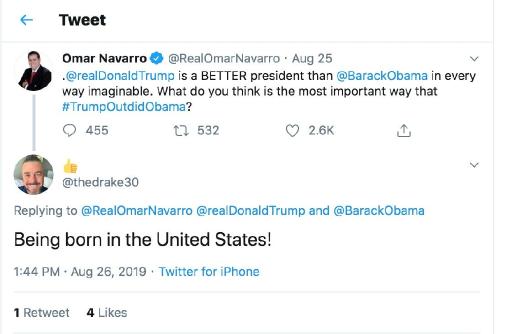 Assuming he did it, which looks very likely, he should face a lengthy suspension, if not fired.

Umpires are public figures that represent the integrity of the business of Major League Baseball.

I hope they fire that idiot.   His threat regarding the weapon should go on his background check to purchase.  He has declared that he will hurt and most likely kill someone and that should be an automatic flag.  As for those tweeters, maroons all of them.

He seems to have acquired his idol's talent for bad spelling.  He spells the words "civil", "Benghazi "  and "capitol"  wrong all in the space of a few sentences.

"You can't do an impeachment inquiry from the basement of Capital Hill without even a vote! What is going on in this country?"

Classic case of needing a breathalyzer attached to his keyboard. I just read that he deleted his tweet and set his account to private.  He went on to profusely apologize for his remarks.  IOW, he got busted over it and now is doing a Trump.....backpedaling.  Too little too late ya schmuck.

Rob Drake should be fired.  He demonstrated his ignorance and bigotry on Twitter.

He has threatened to use an assault rifle to start a "ANOTHER CIVAL WAR" if his president gets impeached.

BTW, communicating a threat is a crime.