Manafort speculated about Ukraine’s responsibility as the campaign sought to capitalize on DNC email disclosures and as Trump associates discussed how they could get hold of the material themselves, deputy campaign chairman Rick Gates told investigators, according to a summary of one of his interviews.

During the 2016 election, Trump campaign chairman Paul Manafort pushed the idea that Ukraine, not Russia, was behind the hack of Democratic National Committee servers, Manafort’s deputy told investigators during the special counsel’s  Russia  investigation.

The unsubstantiated theory, advanced by Donald Trump even after he took office, would later help trigger the  impeachment inquiry now consuming the White House .

Notes from an FBI interview were released on Saturday after  lawsuits by BuzzFeed News and CNN led to public access  to hundreds of pages of documents from special counsel Robert Mueller’s investigation. The documents included summaries of interviews with other figures from the Mueller investigation, including Trump’s former personal lawyer, Michael Cohen.

Information related to Ukraine took on renewed interest after calls for impeachment based on efforts by the president and his administration to pressure Ukraine to investigate the Democrat Joe Biden. Trump, speaking with Ukraine’s new president in July, asked about the DNC servers in the same phone call in which he pushed for an investigation into Biden.

Manafort speculated about Ukraine’s responsibility as the campaign sought to capitalize on DNC email disclosures and as Trump associates discussed how they could get hold of the material themselves, deputy campaign chairman Rick Gates told investigators, according to a summary of one of his interviews.

Gates said Manafort’s assertion that Ukraine might have done it echoed the position of Konstantin Kilimnik, a Manafort business associate who had also speculated that the hack could have been carried out by Russian operatives in Ukraine.


US authorities have assessed that Kilimnik, who was also charged in Mueller’s investigation, has ties to Russian intelligence. American intelligence agencies have determined that Russia was behind the hack, and Mueller’s team indicted 12 Russian agents in connection with the intrusion.

Gates also said the campaign believed that Michael Flynn, who became Trump’s first national security adviser, would be in the best position to obtain Hillary Clinton’s missing emails because of his Russia connections.

Flynn said he could use his intelligence sources to obtain the emails and was “adamant that Russians did not carry out the hack” because he believed that the US intelligence community couldn’t have figured out the source, according to the agent’s notes. Flynn later pleaded guilty to lying to the  FBI  about his contacts with the Russian ambassador.

Mueller’s investigation concluded in March with a report that found insufficient evidence to establish a criminal conspiracy between Russia and the Trump campaign to sway the 2016 election.

The report also examined multiple episodes in which Trump sought to seize control of the Russia investigation but did not conclude one way or the other about whether the president had illegally obstructed justice. Attorney general William Barr, appointed by Trump, concluded that the president had not committed a crime.

Gates worked with Manafort in a lucrative international political consulting business that included Ukraine and later testified against him. Gates pleaded guilty last year in Mueller’s investigation and has been one of the government’s key cooperators. He has yet to be sentenced as he continues working with investigators. Manafort was sentenced to more than seven years in prison, in part for financial crimes arising from his Ukraine work.

During his interviews with investigators, Gates said  Donald Trump Jr  would ask where the hacked emails were during family meetings in the summer of 2016. Gates recalled that other key campaign aides, including future attorney general Jeff Sessions, Trump son-in-law Jared Kushner and Flynn, also “expressed interest in obtaining the emails as well”, according to an agent’s written summary of one interview.

The identity of one of the people who expressed interest in the emails is blanked out.

One time on the campaign aircraft, Gates told the FBI,  Donald Trump  said “get the emails”. Gates also said that another point, Trump told him more leaks were coming, though the heavily redacted documents do not indicate how Trump knew that.

Gates also described conversations with the chairman of the Republican National Committee, Reince Priebus, who entered the White House as chief of staff. Gates described the RNC as energized by the emails and said that though Trump and Kushner were initially skeptical about cooperating with the RNC, “the WikiLeaks issue was a turning point”, the FBI notes show. WikiLeaks was the website that published the stolen emails in the weeks before the election.

The campaign was also very pleased by the releases, though Trump was advised not to react to it but rather to let it all play out, according to the interview summaries.

The RNC would put out press releases to amplify the emails’ release, Gates told the FBI.

Manafort, meanwhile, was trying to advise the Trump campaign even after severing ties, causing alarm among some of the candidate’s most senior advisers.

Manafort emailed Kushner on 5 November 2016, just days before the election, saying he was feeling good about the prospect of a Trump presidency. In the email, Manafort said he was “focusing on preserving the victory” and that he had sent a memo to Priebus and had briefed Gates and Fox News host Sean Hannity, a close Trump ally.

Kushner sent Manafort’s email to Trump adviser  Steve Bannon , who replied: “We need to avoid this guy like the plague.”

“They are going to try and say the Russians worked with wiki leaks [sic] to give this victory to us,” Bannon wrote to Kushner and David Bossie, another Trump associate, in his reply. “Paul is nice guy but can’t let word get out he is advising us.”

Interesting article that suggests the Trump campaign was trying to collude with anyone they could.

Since the disgraceful Dems are so unelectable no cheating is necessary

Do you really believe the Democrats are acutely that unpopular? Compared to whom? The Democrats actually whooped the damn gop by the widest popular vote margin in US history during the 2018 midterm elections...

And yet, Democrats won FEWER seats than the GOP did during Obama and Clinton's first midterms.

BFD--a bunch of liberals voted in lockstep in several areas, and got more overall votes.

Since we don't COUNT overall votes as anything meaningful, WTF is your point?

No matter how you try to spin it the worst popular vote loss in US history is still a great big huge whopping historic electoral loss, for the damn gop...

Now we can see why Hillary lost.

You seem to be a prime example.

Maybe next election, Democratic nominee will actually try to win the most electoral votes instead of the popular vote.

Oops! Did I let the cat out of the bag on what it takes to win?

Hillary was not on any ballots in 2018 when the damn gop suffered The Worst Popular Vote Defeat by any political party in HISTORY! What don't you understand about that?

Hillary was not on any ballots in 2018 when the damn gop suffered The Worst Popular Vote Defeat by any political party in HISTORY! What don't you understand about that?

Gotta love it when you think you are citing a meaningful statistic.

hardly anyone gives a shit about overall votes for Congress because most are astute enough to know that how many SEATS you win or lose is what is important.

It is exactly like citing that Hillary won the popular vote. Only the losing side would care about it, perhaps seeking solace for a stunning defeat.

if you were the leader of any major political party, which would you rather have, a higher popular vote total for Congress or more seats won?

Which do you think Hillary would like in retrospect?

He looks good in prison garb. 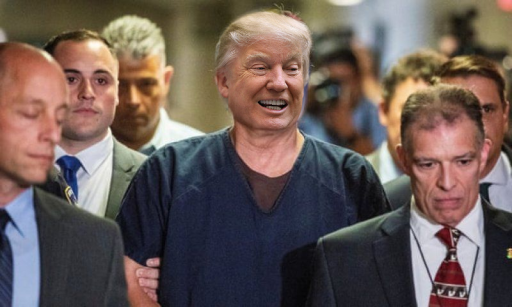