Trump’s war on truth gets sicker — and even more dangerous

We’re far beyond partisanship now. The existential debate of our time isn’t about right versus left. We’ve found ourselves locked in a fight to defend the very fabric of reality itself. The endgame for the rest of us Normals is to victoriously bend the national discourse back to a place where a functioning supermajority accepts that reality is reality and lies are fiction.

About 75 minutes into his latest pathologically unspooled campaign rally,  the president said , “The governor of Virginia executed a baby, remember that whole thing?”

No, I don’t remember that whole thing. Because it never happened.


Northam didn’t execute a baby, obviously, even though it’s true he once he botched an explanation about hospice and palliative care for babies born with severe birth defects. He was talking about rare and terrible cases when a baby is born and won’t survive for long due to physical deformities or other life-ending complications, and was merely voicing support for parents who choose to let their dying child pass away peacefully without unnecessary pain or suffering. The botched part had to do with  the context of a reporter’s question  about late-term abortions in cases when pregnancy threatens the life of an expecting mothers.

In Donald Trump’s desperately warped brain, and subsequently the warped brains of his fanboys, however, this means that Northam supports allowing parents to gratuitously murder their newborns. Or at least that’s how the lie  started , but now it’s “the governor of Virginia executed a baby.”

Back here on Earth One, no rational adult would jump to “Northam supports infanticide” and certainly not that Northam “executed a baby.” Sadly, Trump and his Red Hats aren’t rational adults. I know that’s not a politically acceptable sentiment, but let’s stare the ugly truth in the face here. The Trump base has completely lost touch with reality, and it’s one of the most damaging aspects of the ongoing Trump crisis.


It’s kind of impressive when we look at this phenomenon dispassionately. The conservative entertainment complex, along with Russian disinformation and Trump himself have convinced upwards of 60 million American voters that one of the most notorious bullshit artists since Hearst and Barnum is, in fact, the only trustworthy man in politics. And  everyone else  is a pack of liars. It’s perhaps the most successful propaganda campaign in recent memory. It’s like convincing half the population that cancer is healthy, or that goblins exist. Of all the Republicans to choose from, the one they chose as their Truth Messiah is … Donald Trump, the man who once stared into a camera and declared that steaks sold in Sharper Image mall stores were “ the world’s greatest steaks .”

Sixty million suckers have been successfully tricked into going along with whatever nefariousness Trumpism injects into their tenderized skulls, whether via Fox News, Russian propaganda or the White House,. Adding to the problem, there are countless millions more who might not believe every Trump lie, but who don’t know  what  to believe, leaving themselves angry and confused, incapable of accepting that anything is real, pro- or anti-Trump. When people don’t know what to believe, the takeaway is the insufferable “both sides are liars” cop-out, which serves to depress voter turnout, thereby favoring the Republicans — low turnout has always been good for GOP candidates. And Trump wins.

When it comes to the true believers, though, the consequences of their total disconnect from reality could be catastrophic.

When “an ignorant mass of propaganda-addled people,” as NeverTrumper Tom Nichols  called them  the other day, is willing to believe the screeching of a man who lied, stole and flimflammed his way through the New York real estate sector, a man with a four-decade record of one scam after another, everything from  Trump University  to the  Trump Foundation  — a man with a growing roster of  nearly 14,000 lies  since taking office — they’re willing to believe literally anything. It’s not unlike Scientology: Once you’re in, you’re all in. Forty percent of American voters have “gone clear” — Full Xenu.

Now, the “forgotten” whoevers enjoy a white-knuckled grip on the levers of power, steering us anywhere their dictators want to go, including the utter destruction of America disguised as making America great. That’s damage. A republic, along with its democratic processes, can’t possibly function, much less endure, when half of all voting adults, give or take, are spoiling to act on marching orders from a regime of predatory disinformers.

Trump’s loyalists believe Democrats want to execute newborns. They believe our overseas allies are  impressed  by Trump’s leadership. They believe the president didn’t commit obstruction of justice in a dozen instances exhaustively described in the Mueller report. They believe Trump’s extortion of Ukraine was a “ perfect conversation .” They believe Trump is building the “beautiful” border wall, rather than just  replacing existing fences . They believe this is  the greatest economy in history . I could do this all day.

They might even be willing to accept that nuclear war is the only way to stop Iran or China from being  so unfair  to Trump. They might also accept it if Trump ordered Bill Barr to have Adam Schiff and Nancy Pelosi arrested for an attempted coup.

It doesn’t require much by way of imagination to consider the myriad ways in which Trump could exploit the undeniable power of his cult leadership. Even if he never goes there, it’s unacceptable on its face that he possesses this power in the first place.

Politics has always involved a degree of subterfuge and one-off lies. This crisis, on the other hand, has careened far beyond normalcy into a perfect storm in which an entire universe of falseness is being devoured by a voting bloc of 40-percenters who are way too close to acting as a ruling majority. Indeed, the source code of the nation’s current sickness is less about the specific lies being told and more about the quasi-religiosity of the believers of those lies. We can debunk every falsehood as it ejaculates out of Trump’s yapper — we can share every Snopes and PolitiFact item proving Trump’s mendacity — but if these indoctrinated, conditioned dupes are willing to defiantly embrace the lies anyway, irrespective of the facts, it’s all wasted effort and Trump remains at the helm, interfaced directly with the worldview of his fanboys. Damage.

We’re far beyond partisanship now. The existential debate of our time isn’t about right versus left. We’ve found ourselves locked in a fight to defend the very fabric of reality itself. The endgame for the rest of us Normals is to victoriously bend the national discourse back to a place where a functioning supermajority accepts that reality is reality and lies are fiction. This has to be achieved before the mentally disintegrating Mad King convinces his disciples that he can use his unlimited power to arrest dissidents, to execute “invading” migrants, to arrest for murder parents who allow their dying infant to pass away peacefully —  to manifest horror shows we can barely begin to contemplate.

The aforementioned 60 million Americans should never have allowed themselves to be fished in by this troll and his gaggle of Fifth Avenue Clampetts. Sadly, the duty of course-correcting the destructive Trump tangent in our national history now falls to the rest of us. Containing and marginalizing the sickness is more important to the future of the republic than just about anything else, shy of the climate crisis. Whether by impeachment or popular election, all this must end, and the impact craters must be carefully filled in by legislative reforms and amendments so it’s less likely to ever happen again.

Karl Rove was  once quoted  as saying that he and the Bush administration were in the process of  subverting the “reality-based community” by manufacturing their own reality. Ironically, it was a duplicitous  reality show host  who, more than a decade later, finished the job.

Trump’s loyalists believe Democrats want to execute newborns. They believe our overseas allies are   impressed   by Trump’s leadership. They believe the president didn’t commit obstruction of justice in a dozen instances exhaustively described in the Mueller report. They believe Trump’s extortion of Ukraine was a “  perfect conversation  .” They believe Trump is building the “beautiful” border wall, rather than just   replacing existing fences  . They believe this is   the greatest economy in history

I could do this all day. If they’re willing to believe all that, they’d easily be willing, with just the right combination of tweets and rally skits, to believe that perhaps the Democrats conspired with Ukraine to frame Russia in the 2016 attack on our election. And if they believe that one, they might be willing to believe that maybe the Democrats will do it again. Once that’s accepted, they might also be willing to allow Trump to defy the results of the 2020 election if he loses. From there, they might additionally accept a move by Trump to become the American Putin by creating a new governing post for himself and then rigging subsequent elections to keep himself there.

Deaf, dumb and blind - See no evil, hear no evil, speak no evil -

David Frum on Twitter: "These Ukrainian soldiers were killed in August 2019, while President Trump was withholding congressionally voted military aid to pressure Ukraine to exonerate Russia and defame his political opponents"

How many Ukrainian soldiers were killed during Obama's Presidency when he refused to give ANY lethal aid to Ukraine as it was under invasion?

At this point, the broad contours of the Ukraine scandal are well understood. President Trump appears to have used hundreds of millions of dollars in taxpayer money appropriated as military aid to extort a vulnerable ally into helping him rig the 2020 election on his behalf.

But there are two other aspects of this scandal that need elaboration. The first is the degree to which this whole scheme is corrupting multiple government agencies and effectively placing them at the disposal of Trump’s reelection effort.

The second is that two of the scheme’s goals — getting Ukraine to  validate a conspiracy theory  absolving Russia of 2016 sabotage, and to manufacture smears of one of Trump’s leading 2020 rivals — are really part of the same story. At the core of this narrative is Trump’s continuing reliance on foreign help in corrupting our democracy to his advantage, through two presidential elections, and the covering up of all of it.

SPEAKING OF CONSPIRACY THEORIES, YOU GOT A REAL WHOPPER  THERE, JR..

How many Ukrainian soldiers were killed during Obama's Presidency 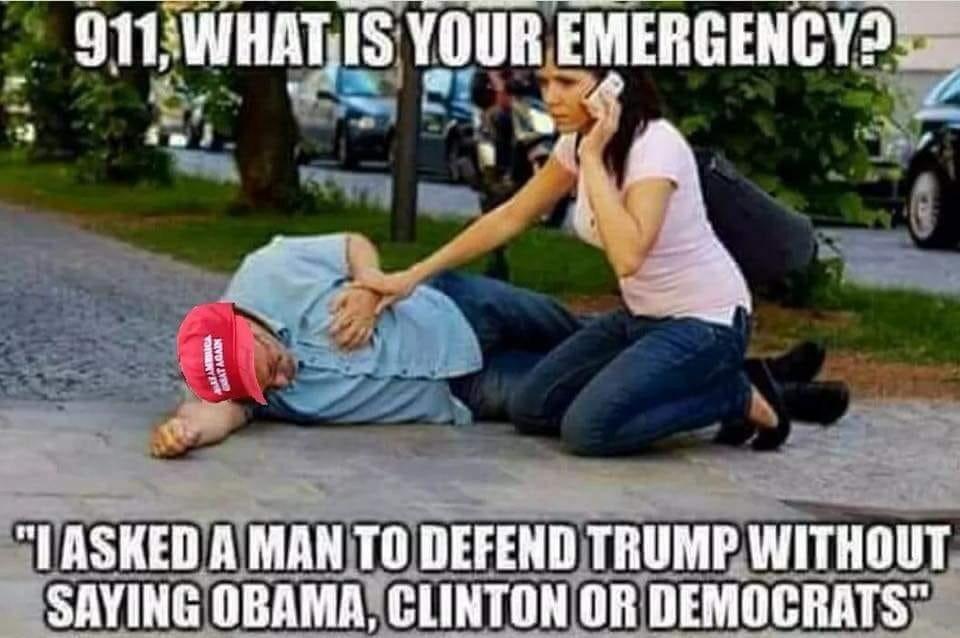 Of course Obama admitted to brokering the deal that set this whole mess off. His lackeys deny that still as well.

What does that have to do with Trump withholding aid to Ukraine until the president of that country agreed to publicly announce an investigation of Trump's election rival?

We see responses to this seed proving the articles point. Trumpism is a cult and it's followers will say anything to maintain the cult leader.

Funding, or the alleged lack of it had nothing to do with their alleged deaths

At least you keep your nonsense brief.

And your nonsensical response was even briefer.

Well we did have to endure 2 years of disinformation that was debunked in a day.

Exactly. And how many have died since they got the aid. Typical liberal feelings on display. "But, but, but we didn't throw money at it soon enough." What a load. A few weeks made the difference? Logistics alone wouldn't have been effective for at least two months. But Trump.