A woman in Texas was found dead outside the home of an elderly couple she cared for after being attacked by a group of feral hogs on Sunday morning.

The victim, 59-year-old Christine Rollins, arrived at work in the rural southeast Texan town of Anahuac around 6 a.m. on Sunday when it was still dark. The 84-year-old homeowner found Rollins’ body lying in the front yard when he looked outside after she didn’t arrive at their door for work.

Police were called and initially considered the possibility that Rollins had died of a medical condition before her body was discovered by the feral hogs.

However, an autopsy Monday confirmed the cause of death as loss of blood “ due to feral hog assault ,” Chambers County Sheriff Brian Hawthorne told reporters during a news conference.

“It looks like she got out of her car and locked it,” Hawthorne said. “[She] was probably trying to make her way to the front door when, it appears, these animals must have come along.”

The medical examination found that Rollins was attacked by “multiple hogs” based on the various size of the bites on her body.

“There is no question in the medical examiner's mind that this was feral hogs that caused her death," Hawthorne said, adding: “In my 35 years, I will tell you it's one of the worst things I've ever seen.”

READ: Feral hogs are tearing up Texas. so people are shooting them from helicopters

Feral hogs have taken over some pasture land around the home, Hawthorne said, adding that they are a problem throughout Chambers County. Attacks on humans, however, are extremely rare.

Feral hogs are one of the most destructive invasive species in the U.S. and have long been a problem for Texas farmers.

The hogs cause roughly $1.5 billion in damage each year, according to the U.S. Department of Agriculture, tearing up crops and property, eating endangered species, and spreading diseases to livestock and humans.

The USDA estimates there are about 6 million hogs across the U.S. and approximately half of them live in Texas.

The problem is so great that in 2011 the state made it legal for helicopter companies to take anyone — even tourists — hunting for feral hogs. 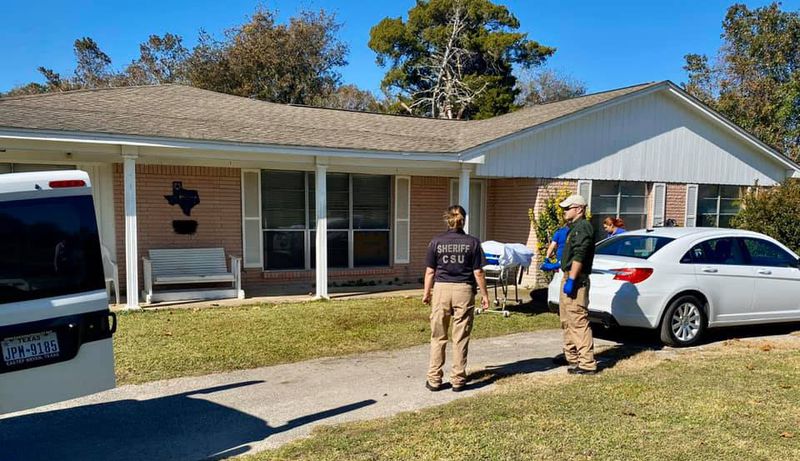 The only good wild hog is a dead wild hog.

Actually, the meat is good, but you better make damn sure you have it tested before you use it for sausage or anything else.

If you're not going to eat the kill, use it as bait to draw more pigs to eliminate.

From what I recall, it takes surprisingly few generations before farm hogs evolve back into wild hogs with tusks and all.

From what I recall, it takes surprisingly few generations before farm hogs evolve back into wild hogs with tusks and all.

They are resilient bastards.  What the vast majority of the country deals with today is actually the cross breeding of truly wild and 'domesticated' (if that is even possible) or farm hogs.  Oh, and don't fall if you're in a hog pen....   then you're just that much more food stock, and they do love that fresh hot meat.

And "generations" with hogs can be a year.  They drop piglets like there's no tomorrow and can do so every few months and have about 10 to 15 at a time and each of those little bastards are ready to breed in a couple of months.

There are a few professional hunters here in the San Antonio area that do routine pig and coyote hunts on the military bases in the area.

Oh, and don't fall if you're in a hog pen

I've read a few murder mysteries where that's how they dispose of the bodies - and it's happened in real life. Everything but the teeth, I think?

I guess I'm lucky that the hogs near my house haven't ever gone feral! One time I almost hit several baby pigs in the road - very cute, but mama was HUGE and was standing right near them. I did not steal a baby pig.

I guess I'm lucky that the hogs near my house haven't ever gone feral! One time I almost hit several baby pigs in the road - very cute, but mama was HUGE and was standing right near them. I did not steal a baby pig.

If they're not contained and controlled on a farm.....   they're feral.   Period.

Next time, if they're the small young, just roll over them.  It might get messy, but better that than having a few hundred roaming around the area in a year or two....

The farmer got them all back in. Although one year a motorcyclist hit one that got out ... and sued the farmer, I think.

Luckily they are no longer there. Most of the time it wasn't bad, but every now and then if the wind blew in the wrong direction and it had rained a lot .... it stunk. But since he was there first, I wasn't going to complain about it.

Actually, the meat is good

When I was a kid, my uncle shot one on Catalina island and served it up for Christmas dinner (or was it Thanksgiving? I forget). Anyway, there it was on the table: giant pig with an apple in its mouth. Pretty cool. Don't ask me how it tasted, though. When you're a kid, meat is meat.

Assuming the picture is accurate it doesn't look like she was that far from their front door. Surprised they didn't hear anything.

Sounds like Texas needs to start putting bounties on feral hogs. That would help get their population under control.

Several counties do have bounties. Legislation also cleared the way to allow us to eradicate these from Helicopters with fully automatic machine guns. If only we could extend that to the cartels.

That would help get their population under control.

The problem is that we can;t keep up with the breeding.   Each sow can drop 40 or 50 piglets a year and each one of those little shits can do the same in a few months after birth...  assuming of course they're female.

That's why democrats are trying to get them voting rights.

In Texas we often participate in the Hog genocide. These animals are devastating to the ecosystem and you are free to eradicate them year round.

Call friend, cooler with red bull, AR10's with Thermo sights and a night to spare. They roll through in large groups and you put them down one by one. Exactly why we need large magazines and high powered semi automatic rifles.

One of my friends likes to embalm the skulls. I find that a little odd but to each their own.

30-50 Feral Hogs , refers to a hypothetical argument made on Twitter defending the ownership of assault rifles which posited that such weaponry would be necessary to combat the "30-50 feral hogs that run into my yard within 3-5 mins while my small kids play." After the tweet was posted in early August 2019, it was widely mocked on the platform, spawning parody lyrics, image macros and photoshops .

Looks like the haters have no idea what they're talking about. 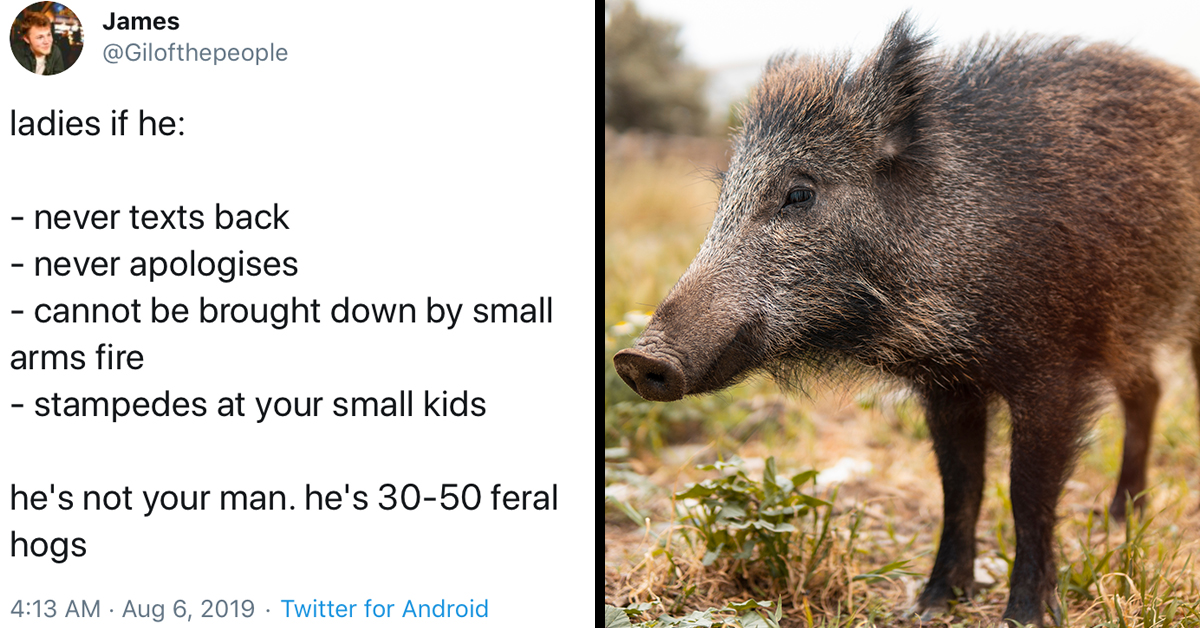 In my sheltered suburban life, I did not realize this was such a big deal. 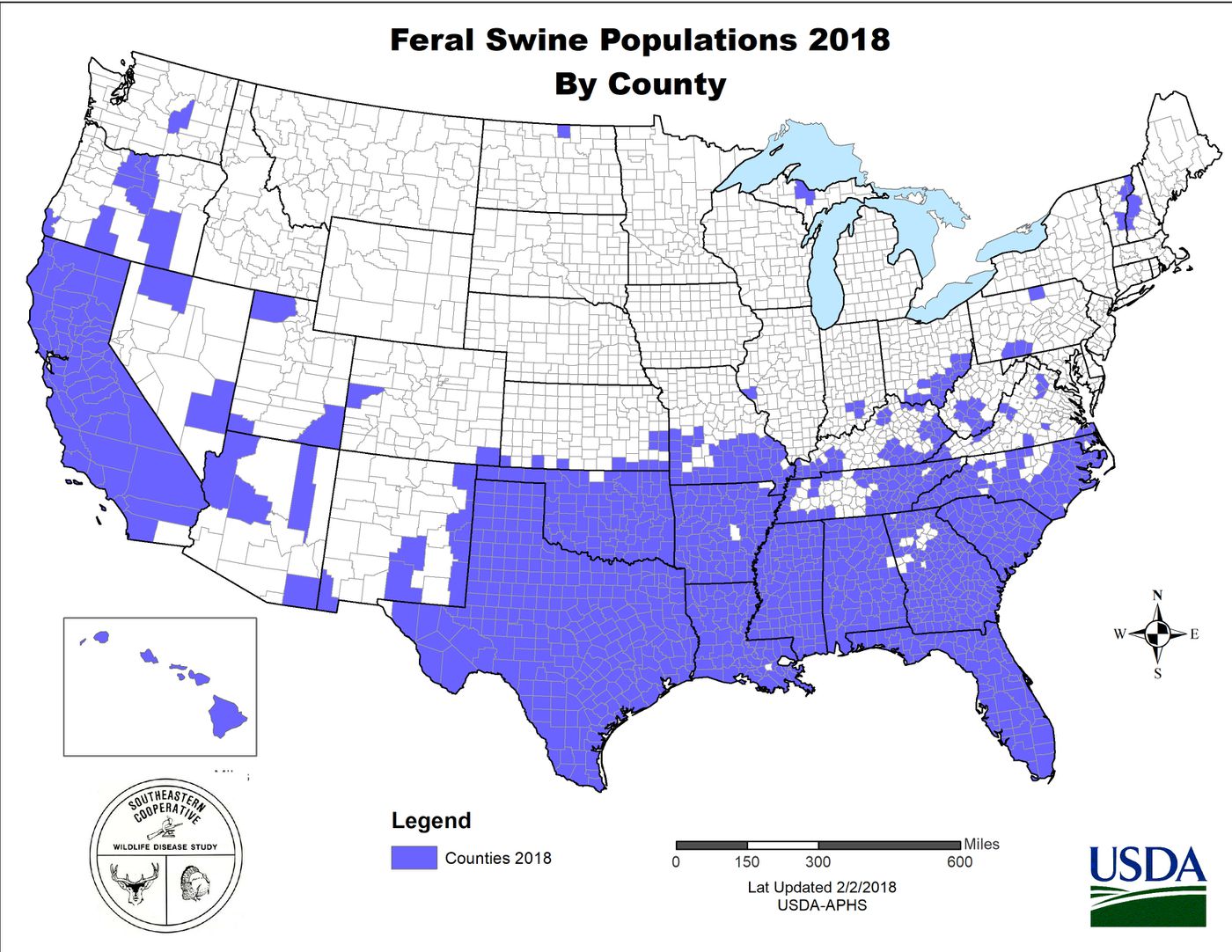 Way back in the 60's feral dog packs were a problem around Gettysburg where we had family hunting cabins.

You could not go fishing or walking without a rifle and they were all fair game, year round.  Now that that 'problem' is long gone, guess what?

They have a feral hog problem in the 10 counties that share a border with WV and MD.

Same as in TX, there is no bag limit, no license required, just have them tested before trying to eat them, or they will be donated to Purina.

They have feral hog hunts in Florida too.

This happened about a month ago.

Don’t mess with the hogs!!

I was always afraid of those things.  I keep thinking about the movie Hannibal......shivers.....