Election Meddling - Who was really behind it?

community » Discussions » Category » News & Politics » Discussion » Election Meddling - Who was really behind it?

By:   KAREN YOURISH and TROY GRIGGS

American intelligence agencies and both parties on Capitol Hill are in consensus that, as Dan Coats, the director of national intelligence, said, “Russia conducted an unprecedented influence campaign to interfere in the U.S. electoral and political process.” 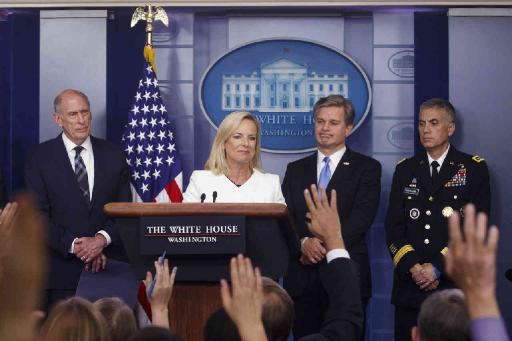 Kirstjen Nielsen, the secretary of homeland security, said that Russia was attempting to influence the midterm elections. Ms. Nielsen was joined at the briefing by Dan Coats, the director of national intelligence, Christopher A. Wray, the F.B.I. director, and Gen. Paul M. Nakasone, the head of the National Security Agency.   Tom Brenner for The New York Times

American intelligence agencies and both parties on Capitol Hill are in consensus that, as Dan Coats, the director of national intelligence, said, “Russia conducted an unprecedented influence campaign to interfere in the U.S. electoral and political process.”

T he federal and congressional intelligence and national security groups that have stated that Russia interfered in the election:

2.   Office of the Director of National Intelligence

In a  January 2017 assessment , the Central Intelligence Agency, the National Security Agency, the F.B.I. and the Office of the Director of National Intelligence concluded that Russia interfered in the election. Officials across the intelligence community have affirmed the findings in the report, while Mr. Trump has questioned them.

“Russian President Vladimir Putin ordered an influence campaign in 2016 aimed at the US presidential election.” Jan. 6, 2017 »
--Intelligence assessment by the C.I.A., National Security Agency, F.B.I. and Office of the Director of National Intelligence

“The director stands by and has always stood by the January 2017 intelligence community assessment.”Nov. 11, 2017
--Mike Pompeo
C.I.A. director

Professional "American" Politicians, along with "American Media", do THE ….. "Influence" thingy.....ALL THE TIME !

Sad that you think that the use of emojis makes you seem more intelligent. Grow up!

I think they need to take his emoji privileges away.

Election meddling and who engineered it?

The answer is simple as stated by the stable genius.  "A four hundred pound dude living in his mom's basement."  For the simple, the simplistic solution always works best.

US does not need professional or dedicated INTEL patriots when it has the 'hair man' in charge.

Besides, now the American betrayal of the Kurds seems as distant as the era of 'The Stormy Who'.  Trumpism moves at light speed.

Note that the intelligence agencies are not saying that Russia was the only foreign country or foreign entity meddling in the election.  There are a host of lobbyists in Washington representing many different governments and foreign interests.  It's all quite legal as long as a hired political mercenary does the meddling.  And there are a number of activists groups in the United States promoting foreign interests, too.

Everyone is shouting that Russia did it.  But what is not being said is that the government's intelligence agencies failed to prevent it.  It's too late to yell 'fire' after the forest has burned.