Why did the special counsel not tell America that Christopher Steele’s information was false?

In her public order Tuesday, Presiding Judge Rosemary Collyer of the Foreign Intelligence Surveillance Court didn’t mention Robert Mueller. But her stinging rebuke of the FBI for abusing the FISA process to obtain a warrant to spy on Carter Page invites the question: How could the special counsel have ignored the Steele dossier?

Inspector General Michael Horowitz confirms the FBI sought to verify the claims former British spy Christopher Steele made in his dossier. Yet during an appearance before the House Intelligence Committee on March 20, 2017, when Mr. Comey was asked directly if the bureau was investigating them, Mr. Comey answered: “I’m not gonna comment on that.”

He had good reason to dodge. By that time, the Horowitz report makes clear, the FBI knew that most of the Steele dossier’s claims were unreliable. Yet rather than take a hard look at it, Team Mueller made a deliberate choice to tiptoe around it. In his opening statement to Congress when he testified this July, Mr. Mueller declared he would not address “matters related to the so-called Steele dossier,” which he said were out of his purview.

This makes no sense. The Steele dossier was central to obtaining the Page warrant, and the leaks about the dossier fanned two years of media theories about Russian collusion that was one reason Mr. Mueller was appointed as special counsel. Mr. Mueller owed the public an explanation of how much of the dossier could be confirmed or repudiated.

Instead he abdicated, and the mystery is why. Perhaps as a former FBI director, Mr. Mueller wanted to protect the bureau’s reputation. But the best way to do that was to lay out the truth and explain any mistakes. A less generous explanation is that Mr. Mueller was more a figurehead as special counsel, and that the investigation was really run by his deputy Andrew Weissmann.

Remember that Justice official Bruce Ohr —who served as a conduit between Mr. Steele and the FBI—says Mr. Weissmann was among those at Justice he briefed that Mr. Steele hated Mr. Trump and that the dossier was opposition research. Before Mr. Mueller made him deputy, Mr. Weissmann also praised then Acting Attorney General Sally Yates in an email for refusing to implement a Trump executive order. This November he appeared on MSNBC to suggest that Mr. Trump had broken the law and that he didn’t have faith in Attorney General William Barr to honestly handle the work of career prosecutors.

Mr. Mueller’s dodge on the Steele dossier—and Mr. Weissmann’s partisanship—vindicates our view from 2017 that Mr. Mueller was the wrong man to be special counsel. On the evidence in the Horowitz report, the special counsel team had to know the truth about the Steele dossier and false FBI claims to the FISA court, but they chose to look the other way.

Robert Mueller has a long history screwing up investigations. He is either crooked or an idiot. Either way he wasted 40 Million dollars of our money and needs to serve the rest of his life rotting in a prison cell for his incompetence during this investigation.

He knew, he ran cover for the previous administration.

This is an important point that has been mostly overlooked in all this political hoopla.  A true lack of focus on what was not investigated and should have been probed if the investigation was truly legit.

He lied during his testimony claiming he had no idea who Fusion GPS was. We are supposed to believe the entire country knew this but the man tasked with investigating was clueless?

He needs to be indicted for lying under oath. He can drool in a prison cell.

"How could the special counsel have ignored the Steele dossier?" 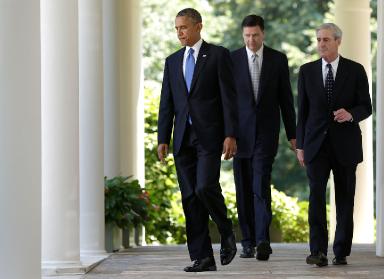 Those three make Watergate look like a j-walking scandal.

Those three make Watergate look like a j-walking scandal.

To bad they don't get busted for that like Regular folks always do.

Notice the corruption deniers skipped this one.

Lol, actually you corruption deniers are pretty busy here. Its the rest of us who skipped it.  I'm just the messenger.

Right, because the left is just so damn pure./S

Blind enough in their TDDDDS to dismiss anything that doesn't fit their narrow hatred. To bad the FBI/DOJ didn't go after Hillary with the same vengeance. The Dems might have had to come up with a better candidate; and TDDDDS might have been avoided.

Someone is going to write an excellent book about at some point about all the shenanigans that went on with Mueller. What a disgraceful way for him to end his career.