" [G]overnment action will prevent divisive behavior that undermines community cohesion. There are concerns that such boycotts have legitimized antisemitism, such as Jewish films being censored and Jewish university societies being threatened."

For the Jewish community, the speech was significant as it referred to the action the government will take with organizations adopting boycotts, divestments and sanctions against foreign countries.

Britain's Queen Elizabeth and Charles, the Prince of Wales proceed through the Royal Gallery before the Queen's Speech during the State Opening of Parliament at the Palace of Westminster in London, Britain October 14, 2019.

Although the Queen delivers the Speech, the content is written by the government and approved by the Cabinet. It sets out the government’s policies and the proposed legislative program for the new Parliamentary session.


This is why the speech is significant - as it outlines policy intentions of incumbent prime minister, in this case Boris Johnson.

Boris Johnson used the Queen’s speech to refocus attention away from Brexit and on to the NHS.

Speaking to BBC Breakfast, chief secretary to the Treasury, Rishi Sunak said: “The heart of this Queen’s speech today will be our record funding settlement for the NHS: £34bn over the next five years.”

For the Jewish community in the UK though, the speech was significant as it referred to the action the government will take with organizations which adopt boycotts, divestments and sanctions against foreign countries.

The speech read," government action will prevent divisive behavior that undermines community cohesion. There are concerns that such boycotts have legitimized antisemitism, such as Jewish films being censored and Jewish university societies being threatened."


The Royal family has recently come out in public support of the Jewish community -   Prince Charles made a speech at Buckingham Palace's   pre-Hanukkah reception:

"It is a great delight to welcome you this evening to Buckingham Palace, as the festival of Hanukkah approaches, and to celebrate with you the contribution of our Jewish community to the health, wealth and happiness of the United Kingdom.

"In every walk of life, in every field of endeavor, our nation could have had no more generous citizens, and no more faithful friends. That is why I am so glad to have this opportunity to say thank you, albeit in a small way, for all that you do, and have done, across the country, in major national and international institutions, and in local communities the length and breadth of the land."

The prince went on to say how he sees the UK as "a community of communities."

On Wednesday, December 19, the official residence of Prince Charles,   announced that he has scheduled to visit Israel   on behalf of the British government for the first time, Clarence House, for the World Holocaust Forum at Yad Vashem, at the invitation of President Reuven Rivlin, on January 23, 2020.

"...government action will prevent divisive behavior that undermines community cohesion. There are concerns that such boycotts have legitimized antisemitism, such as Jewish films being censored and Jewish university societies being threatened."

More and more Countries, Leaders, States and cities are banning BDS (Boycott, Divestment, Sanctions) due to its being antisemitism and dedicated to delegitimizing and the destruction of Israel.

And hopefully it will screw Roger Waters, the infamous Israel-bashing member of the Pink Floyd band.

"...30 terrorists, 20 of whom were imprisoned for their crimes, held senior positions in the 13 BDS organizations that were investigated. More than 100 connections between terror organizations and BDS were uncovered."

And then there are these clowns... 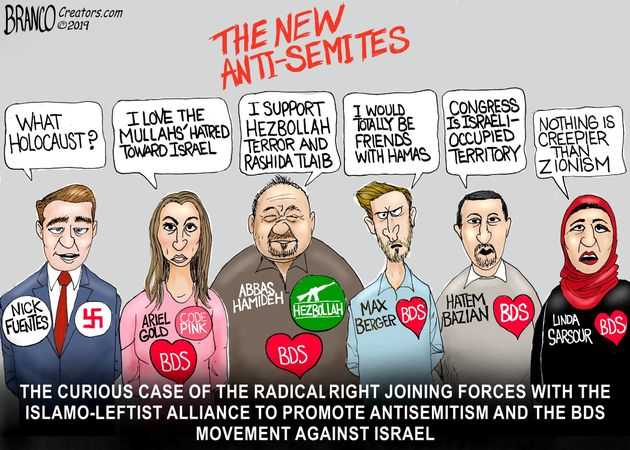 You can add Bernie Sanders and "The Squad" to those 6 (and I'll bet there are a hell of a lot more who belong to it).