'Our enemy is here': Iran protesters demand that leaders quit after plane downed

'Our enemy is here': Iran protesters demand that leaders quit after plane downed 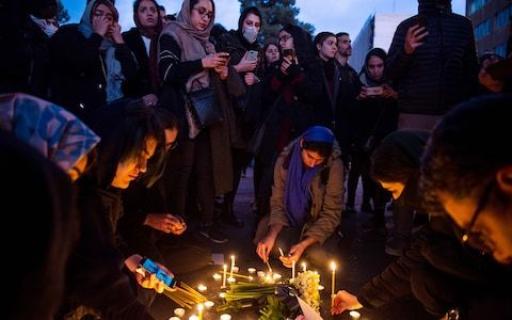 Demonstrators light candles while gathering during a vigil for the victims of the Ukraine International Airlines flight Credit: Ali Mohammadi/Bloomberg

DUBAI (Reuters) - Protests erupted across Iran for a second day on Sunday, increasing pressure on the Islamic Republic's leadership after it admitted its military shot down a Ukrainian airliner by accident, despite days of denials that Iranian forces were to blame.

"They are lying that our enemy is America, our enemy is right here," one group of protesters chanted outside a university in Tehran, according to video posted on Twitter.

Other posts showed demonstrators outside a second university and a group of protesters marching to Tehran's Azadi (Freedom) Square, as well as protests in other cities.

Some state-affiliated media carried reports of the university protests, which followed demonstrations on Saturday sparked by Iran's admission that its military mistakenly shot down the plane on Wednesday, killing all 176 aboard, at a time when Tehran feared U.S. air strikes.

The Ukraine International Airlines plane was downed minutes after taking off from Tehran bound for Kiev on Wednesday. Many on board were Iranians with dual citizenship, while 57 were holders of Canadian passports.

Demonstrations against a hike in fuel prices turned political last year, sparking the bloodiest crackdown in the 40-year history of the Islamic Republic.

About 1,500 people were killed during less than two weeks of unrest that started on Nov. 15, three Iranian Interior Ministry officials told Reuters, although international rights groups put the figure much lower and Iran called the report "fake news."

Iranian officials sought to portray the plane disaster as a second blow to a nation mourning after Soleimani's death.

His funeral prompted huge public gatherings, which the authorities described as a show of national unity. But the displays of emotion have been swiftly overshadowed and protesters on Saturday tore up pictures of the slain general.

The killing of Soleimani dramatically escalated tensions between Tehran and Washington, following months of hostilities since Trump withdrew from a nuclear pact between Iran and world powers in 2018 and then toughened up sanctions.

But the displays of emotion have been swiftly overshadowed and protesters on Saturday tore up pictures of the slain general.

Thank you for that and this article. The Iranian people have placed the blame where it belongs - on the regime! Protesting in Iran takes courage, many lives have been lost. How far will this go?  Regimes such as this are extremely hard to topple.

How far will this go?  Regimes such as this are extremely hard to topple.

There was a major effort in the past--- really big opposition to the government's policies, but ultimately failed. (It was called "The Green Movement"):

Ten Years On, the Islamic Republic Only Strengthens What It Represses

Ten years ago today, shortly after Iran’s presidential election on June 14, 2009, millions of people took to the streets of Tehran chanting, “Where is my vote?” The protests that came to be known as the   Green Movement   shook the Islamic Republic like nothing had since its founding in 1979.

Among the unforgettable images from those days were those of women and men marching side by side, not only protesting the dishonesty of the election results but also refusing to submit to the government’s repressive presence in almost all aspects of their lives.

They did so at great risk. State security forces, including agents of the Islamic Revolutionary Guard Corps, arrested thousands of protesters, dozens of whom lost their lives.

They had been protesting for years I had thought. I thought I read that a lot of them were killed when they were trying to stop a protest. I may be thinking of something else.

Anyway, it seems they haven't been happy with the government for quite a while.

They've been protesting for years. Sometimes the protests are few and far between-- but things  really came to a head a while back-- IIRC 20o8 or so...?? There were a really large number of iranians protesting...but ultimately the government surpressed it.

Many people assume that since they live in the Mid-East and that they are mainly Muslims, the Iranians' values are just like the Arabs. But they are quite different (a large portion of the iranian population is strongly pro-Democracy....and very open to new ideas.

(The problem is that another part is just the opposite).

a large portion of the iranian population is strongly pro-Democracy....and very open to new ideas.

When I was in LoshAngeles I met a lot of persian-Americans. (They prefer to call themselves "Persian" rather tyan "Iranian"-- because they are descended from the ancientt Persian civilization.

But I was surprised-- all the ones I met were not religious in the least.

And BTW, for a few years Beverly Hills had elected a Persian-American as mayor....

I live in an area that has a large Persain community and they are very modern, and love western values. And nothing drives them more nuts than being called Arabs. They are not.

"Using those thoughts which should indeed have died"......William Shakespeare (Macbeth)

3  Split Personality    one month ago

I said that day that if this was what the video showed of flight 752, and it was, that it would put a cork in the international drama and cause

the domestic Iranian issues to boil over.

Some state-affiliated media carried reports of the university protests,

I am surprised that Iran's state media hasn't taken up the same talking points of Democrats blaming President Trump for their incompetence, We have seen the proglibs champion how awesome Iran's national guard is purposefully missing American targets with missiles, only to turn around and shoot down a civilian plane/jet.

From the looks of what I have seen there are quite a few lefties including a few members of Congress mourning Solomenei’s death.