Major highways were closed in Queensland as the state was hit with some of the heaviest rain the country has seen for months.

Major highways were closed in Queensland as the state was hit with some of the heaviest rain the country has seen for months. There were also power was cut in parts of New South Wales.

"Heavy, intense rainfall has eased, but showers and thunderstorms still possible through the weekend," the Bureau of Meteorology in Queensland tweeted Saturday, noting 100+ mm of rainfall in many locations.

"Take care on the roads - if it's flooded, forget it." 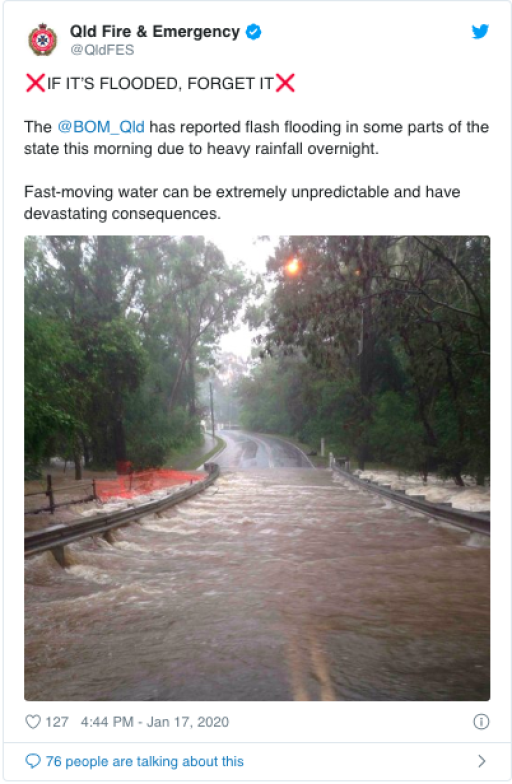 Parts of the state also saw triple the monthly rainfall overnight. While no major damage has been reported, some residential areas were flooded and many of the state's parks and tourist attractions were closed down.

Despite the downpour, authorities are still battling nearly 100 blazes, which have killed 29 people since September and destroyed more than 2,500 homes. Smoke from the wildfires has also   circumnavigated the globe , NASA announced Tuesday.

New South Wales fire services nonetheless welcomed the rain, which they said would help to control the 75 fires burning in the state. However, around 25 are yet to be contained.

“Although this rain won’t extinguish all fires, it will certainly go a long way towards containment," they tweeted.


Where flames have subsided, biologists are starting to look for survivors of the estimated more than one billion wild animals that have been killed in the blaze. Their hope is to find enough rare and endangered species to rebuild populations of creatures found nowhere else on the planet such as koalas, kangaroos and wallabies.

"I don't think we've seen a single event in Australia that has destroyed so much habitat and pushed so many creatures to the very brink of extinction," Kingsley Dixon, an ecologist at Curtin University in Perth, told the Associated Press.

However, specialist firefighters did manage to save the world’s last remaining wild stand of a prehistoric tree, officials said. They set up an irrigation system to keep the so-called "dinosaur trees" moist and pumped water daily.


As relief efforts continued a number of fundraising events have taken place to aid those who have lost their homes and the wildlife rescue efforts.

However, a founding member of popular Australian children's music group "The Wiggles", Greg Page, was   hospitalized after he suffered a cardiac arrest   while performing at a bushfire relief concert in Sydney.

The group nonetheless said they will go ahead with their second fundraising event on Saturday night.

"Greg's main concern was that the show tonight should go on," the band said. "Let's do it for Greg whilst raising much needed funds."

Their hope is to find enough rare and endangered species to rebuild populations of creatures found nowhere else on the planet such as koalas, kangaroos and wallabies.

Of those mentioned there should be enough in captivity to bring bck the species. The trick will be getting them acclimated to the wild after being raised in captivity for so long as the land heals itself.

What I am afraid of is the ones not mentioned. Do we have those species held in reserve, or has government regulation kept them out of Ark type projects that are designed for just this type of catastrophes?

I think right now, they are just handling things as they come, and not taking an accounting of the animals.

2  The Magic Eight Ball    one month ago

I lived in oz for 4 yrs... everything about these fires makes me sad.

I only spent a month there a LONG time ago, but I agree...it's really sad.

My girls show me things and memes all the time. One was a cartoon of a kanga and the baby asked why is was so cramped in the pouch, his mom responded "his mom couldn't make it"

That is so sad.

I went camping a lot down there, I have surfed every wave australia has to offer,  my favorite area is around bunbury  in the southwest.  just below perth, when I woke up I would stick my head out of the tent and see kangaroos all around me, koala bears above me in the trees, and perfect waves corduroy to the horizon. it was surreal.

Me too. I saw they were going to get a "tropical storm" over there and I saw a video of the firemen doing dances; welcoming the rain. I cannot imagine what the people are going through, let alone the first responders

I saw they were going to get a "tropical storm" over there and I saw a video of the firemen doing dances; welcoming the rain.

they need all the rain they can get. no doubt.

I know we are not suppose to "call out" other members, but I'm hoping this is ok....... Has anyone heard from Shona?(sp?) Our member from down under.

Your comment isn't really a callout - intentions matter.  She was on one of Mac's articles earlier this week, I think, and I'm pretty sure I saw her logged in yesterday, but I don't think she commented.  She's fighting multiple myeloma, but doing pretty well, I believe, all things considered.  She didn't mention any danger to her from the fires.

She has checked in, but has not said anything, so we know personally she is fine, but she might be using a phone, so we don't know if her home is OK.

Thank You, Perrie.  I have been thinking of her. I know she doesn't comment much but I figured she would when seeds or articles are posted about the wildfires. So since I hadn't "seen" her I was wondering.

I have been thinking about her also and hope she is okay.  If she ever gets to my neck of the world (So Cal), she will have a place to stay if she wishes.

Paula, I have read that the smoke has circled the globe, SoCal is closer to OZ than I am here in Ga. Have you experienced any of that? I know a couple years ago, the wild fires in TN affected us, the  sky was hazy for days and you could smell the smoke in the air also for days. How are things there?

I don't see a problem right now, but in the past year we had so many fires here, some very close to me, that I stayed inside as much as possible due to the air quality.

Morning Ga. All is well down my part of the state of Victoria. I live in the western part the fires are in Eastern Victoria. My home is safe and currently I am in Melbourne receiving treatment for multiple myeloma. Yes the bushfires are horrendous and the rain has been a god send and it is finally falling in the right places. It is going to be a long road to recovery for both human and animals. But we have seen it all before and unfortunately this will not be the last. It is the nature of the beast and the land in which we live..

Glad you checked in to let us know you're ok, shona.

So good to see you and that you are safe.  Can you tell me if the Irwin's wild life compound is ok?

Evening Paula. Yes they are safe and all is well up there in Queensland.

4  Paula Bartholomew    one month ago

I am sending a shout out to the gentleman in the picture helping the two koalas.  He has a good heart.