Researchers found that, as outlined in Zipf’s law of abbreviation, vocal sounds that penguins use the most tend to be shorter.

African penguins are proving the call of the wild may not be so wild, after all.

The shrieks and squawks of the penguins during breeding season may not sound like much, but new research published Tuesday suggests that these raucous calls follow similar linguistic patterns as some found in human language.

A team of European scientists studied 590 vocalizations from 28 adult African penguins in Italian zoos and noticed parallels between the penguins’ song and two laws that apply across a broad swath of human language. The discovery is the first time these traits have been observed in a non-primate species.

The researchers found that, as outlined in Zipf’s law of abbreviation, vocal sounds that penguins use the most tend to be shorter, similar to conjunctions such as “and” or “so” in human speech. Penguin “chatter” also adheres to the Menzerath-Altmann law, which states that the size of a linguistic construct is inversely proportional to its constituent part. Essentially, this means longer words are typically made up of sequences of short syllables.

“We found the same thing in the songs of the African penguin, where songs containing many acoustic elements are made of acoustic elements of shorter duration,” said Livio Favaro, a researcher in the department of life sciences and systems biology at the University of Turin in Italy and a co-author of the study.

Previous research has found similar patterns of vocal sequences in the calls of gibbons and baboons.

In the new study, Favaro and his colleagues analyzed what’s known as ecstatic display songs, which penguins — typically males — use to communicate during breeding season.

Though the research, published in the   journal Biology Letters , draws similarities to human speech patterns, Favaro emphasized that the ecstatic display calls of penguins do not mirror the complexity of human language. Rather, these vocalizations are used to convey basic information about a penguin’s identity, which he likened to the type of rudimentary information that can be inferred about a person just by hearing their voice over the phone.

What the likenesses to the two laws suggests is that, like humans, penguins have evolved to communicate efficiently — a principle known as information compression that can be found in human language.

F. Stephen Dobson, an evolutionary biologist and co-author of the book “Why Penguins Communicate: The Evolution of Visual and Vocal Signals,” said the findings provide an “interesting” glimpse into behaviors of a relatively understudied penguin species. Dobson was not part of the study.

He noted some of the study’s limitations, including that the research focused on the structure and speed of the calls rather than the information being passed among the birds, which may be a better measure of their communication.

“You don’t know which of the vocal elements are things that are actually information for the penguins,” said Dobson, a professor of biological sciences at Auburn University and a fellow at the University of Strasbourg in France.

Still, he praised the research and suggested ways to expand on the findings, such as using a computer program to manipulate the penguin calls to gauge the responses of the animals and determine which parts of the vocal sequences contain crucial information. For instance, this can be done by altering the frequency of the sound or the decibel level, Dobson said.

Favaro said he intends to continue analyzing vocal communication in African penguins, but he welcomed similar research on other types of penguins and other species.

“This paper paves the way for future studies,” he said, “because it’s very likely that we’re going to find the same patterns in other animals.”

They use 20 words to say something when it takes a normal person to use 5 to say what they mean.

Yeah, but you're not boring and you don't irritate me. I work with some wordy people and I avoid them when I can. Their emails are the same way. Take 3 paragraphs to say what most people can say in 2 0r 3 sentences

Ohoooooo! No, I don't think I am that kind of blabby.

I know some humans who don't communicate efficiently. They use 20 words to say something when it takes a normal person to use 5 to say what they mean.

Thank goodness I don't fall into this category.   I am a firm believer in efficient dialogue.  I seldom use more than a grunt to make my feelings known.  In fact, I once won a contest for being able to communicate effectively with the fewest words possible.  People always want to be my friend because I shun pointless blabbery.  Even Marcel Marceau was envious of my abilities.  Then there was the time that I refused a Nobel Peace Prize because the acceptance speech would have taken me over my daily word limit.  In fact, It has been speculated that Penguins take their que from me.  I pity the people who feel the need to go on and on and on and on and on and...I'm sorry, what was the question?

You actually grunt? I just give people the look.

I can speak a little penguin.

I heard a small conversation...

"Hey bud, it's getting warmer isn't it."

"Yep, did you see that big boat that took most of our food? I think those human things want us to starve."

I would say, sad but true, but these are African penguins so they are used to being hot.

So these are warm weather penguins. 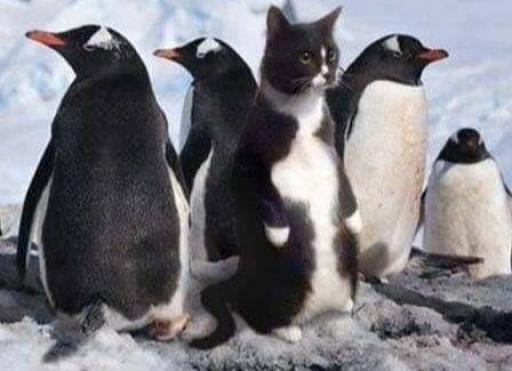