Native Americans suffer greater health disparities from COVID-19, due to systemic inequality that was already in place before the virus arrived in the United States 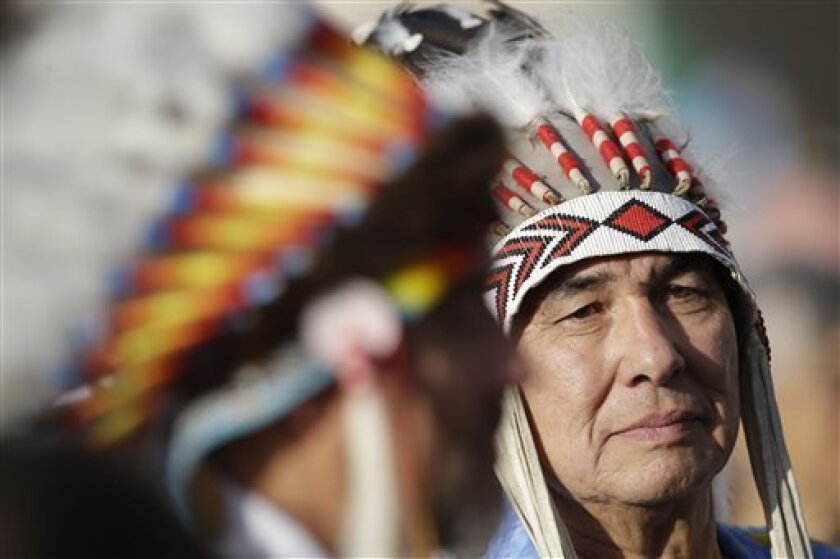 Native Americans suffer greater health disparities from COVID-19, due to systemic inequality that was already in place before the virus arrived in the United States

Indigenous communities have already experienced generations of disparities in areas such as poverty, education and access to health care, so something like the COVID-19 pandemic magnifies the ways in which our systems have failed to serve everyone appropriately. These failures have made the virus especially dangerous.

"Native access to healthcare is unacceptably limited and the fault lies with the U.S. government, which continues to fail its treaty obligation to provide healthcare to Native peoples," said Shannon Keller O'Loughlin, a citizen of the Choctaw Nation of Oklahoma and executive director and attorney for the Association on American Indian Affairs. "The conditions that are killing Native Americans now have existed for a long time, and have been unacceptable for a long time."

In addition to her work with the AAIA, O'Loughlin has served as chief of staff for the National Indian Gaming Commission, was appointed to the Native American Graves Protection and Repatriation Act review committee, and was also appointed to the Cultural Property Advisory Committee by President Barack Obama in 2015. The AAIA is a nonprofit organization providing advocacy on issues that support sovereignty and culture, as well as working with tribes on a local level to implement programs that protect indigenous cultural sovereignty.

She offered her perspective on the ways COVID-19 is affecting Native American nations and what should be done to better support them. (This email interview has been edited for length and clarity.)

A: First of all, Native peoples are resilient. We are still here even though we have been through the spread of disease, the removal of our ancestors from the ground, the theft of our cultural and religious objects, the theft of our children, and numerous policies throughout American history designed to dispossess us of our land and diverse cultures.

However, those policies continue to affect our native nations still, today. Poverty, lack of health care, prevalence of certain diseases, lack of water, lack of housing, a lack of healthy foods — all of these things make native nations more vulnerable to this pandemic. The U.S. has entered into treaty obligations and other federal laws that require health care as part of the payment for taking our lands and resources. Our health care has always been chronically underfunded.

Q: What does access to health care, the ability to purchase food and supplies, and the ability to practice guidelines for social distancing and frequent hand washing, look like in indigenous communities?

A: We believe that native nations share many of the same issues as certain rural areas and as other marginalized communities. What makes Indian Country different is that we remain invisible and ignored in the dialogue, in the news, and that the current administration has ignored our government-to-government relationship. The administration treats Indian Country as if we are in the historic era of assimilation and termination. We are sovereign tribal nations and must be given a seat at the table and should be the ones making decisions about how funding is distributed, how health care can be improved, and how other services can be made more efficient.

Q: There's certainly a long and violent history of indigenous populations being subjected to the spread of infectious diseases. Did the arrival of COVID-19 in the U.S. bring any of that history to mind for you?

A: Time and again in our history, non-natives have spread disease among native populations, sometimes deliberately. Now, the administration continues that history by failing to consult with tribal nations, removing us from decision making on matters that affect our nations and peoples. ... Some construction, like the border wall and oil and gas pipeline work, occurs near native population centers. The government wants pipelines and a southern border wall so bad they're sending potentially contagious workers through tribal areas, and they are utilizing native grocery stores that lack supplies and other services, such that the tribal nations are unable to protect themselves.

Another tragedy I think about often is the disease that devastated the Wampanoag people when European pilgrims arrived on their land four centuries ago. Now, the Trump administration has determined to take the Mashpee Wampanoag reservation out of federal trust status in the middle of this pandemic. Unless we educate ourselves about our history of colonization at the expense of indigenous peoples, we seem destined to continue the devastation.

Q: How does that history shape the way indigenous communities respond to this virus today?

A: Indigenous people are strong in so many ways, and a lot of that strength finds its roots in native culture and tradition. Native peoples are rising to the challenge of the coronavirus with ingenuity and pride. Native peoples cannot gather in groups because of social distancing, so many have taken powwows online with videos of dancing and other traditions. Tribes are also supporting each other. The Cherokee Nation, for example, sent a large shipment of much-needed personal protective equipment to the Navajo Nation.

The outbreak is tragically taking so many elders who bear precious knowledge of traditions and language, so while it is impossible to replace them or their wisdom, native peoples are using homeschooling as an opportunity to share native language and culture with the next generation. Since it could kill you to go to the grocery store, many native peoples are turning to the traditional foods of their ancestors and growing indigenous crops. The fact that native peoples have suffered so often from disease and mistreatment, historically, makes indigenous people today cling to their cultural practices and traditions as a way to survive.

Q: What are some steps that you'd like to see taken to specifically address the needs of indigenous communities during this pandemic?

A: Tribal governments keep digging deep to fight this pandemic and the U.S. federal government keeps holding up much-needed aid. Give tribal governments what Congress set aside for them, but that is just a start. We need testing on every reservation and in every neighborhood where native people call home. We need meaningful tribal consultation at every step in the process. ... We need not to be ignored but respected as equal partners in the care for our shared country.

Tribal governments keep digging deep to fight this pandemic and the U.S. federal government keeps holding up much-needed aid. Give tribal governments what Congress set aside for them, but that is just a start. We need testing on every reservation and in every neighborhood where native people call home. We need meaningful tribal consultation at every step in the process. ... We need not to be ignored but respected as equal partners in the care for our shared country.

Who and where are the Native American leaders during this crisis, and what are they doing about it. What are the governors of their states, and their representatives in Congress doing about it.

1st Greg, the governors of the states with the tribes have, pretty much, little to no control unless the state is a PL-280 state.  Congressional reps???  That's a big BS.  The vast majority of "Congressional Reps" don't give a rats butt about the tribes and what is happening to them.  Why??  Tribes don't do lobbying to the extent, as an example, that Huntsville, AL can do.  The Huntsville district has huge amounts of money flowing in and out, but since they don't have any tribes there, the reps don't worry.  However, further south in AL are the Poarch Creek Band and - nope - they don't get any representation or even visits from their reps.

Now to the tribal leaders - they're bashing their heads against the walls on a daily basis.  National Congress of American Indians (NCAI) and Association of Indian Affairs are the two largest Indian organizations with tribal leaders trying to formulate working relationships with the Feds and states.  There are also other tribal organizations joined at the hip trying to move some mountains.  There are tribes/nations who are sending supplies/personnel/medical assistance to many of the tribes who have absolutely no medical base or medical capabilities.

Sadly, we've got a long way to go.

A long standing problem with the federal government. Underfunding all programs for Natives including the Indian Health Service (IHS).