Yes, your grocery bill is getting higher. Here's how much more you'll be spending this year.

community » Discussions » Category » News & Politics » Discussion » Yes, your grocery bill is getting higher. Here's how much more you'll be spending this year.

Families will pay nearly $400 more for groceries this year, as prices rise and coupons quietly disappear.

By the end of the year, the average American family can expect to have paid an additional $370 for groceries, estimates Nielsen managing director Morgan Seybert. But it's not just rising prices that are buffeting wallets — weekly sales and discount coupons are also quietly disappearing.

"Retailers are still struggling with supply," said Seybert, with prices across stores about 3.5 percent higher. "Consumers aren't able to take advantage of sales like they used to, in order to create savings at the register."

Even before the pandemic, nearly half of adults said they would have difficulty paying for an unexpected $400 expense, according to a Federal Reserve survey. The rise in grocery prices can add up quickly, especially against a backdrop of historic unemployment. Molly Edmunds was recently laid off from her position as an interior decorator after the business lost all its work after coronavirus hit. Now the Seattle-area mother of two and her husband are down to a single income.

"You don't really think about the prices, but you go to check out and you're spending $100 more than you're used to — and we're buying the same amount of stuff," Edmunds told NBC News.

That's caused her to pare the grocery list back to focus more on essential items, such as the loaf of bread they go through each day, now that the family is eating all of its meals at home. They've already eliminated extras such as "the little snack foods that the kids love, the little yogurts that are prepackaged," she said. "Now we buy in bulk."

To reduce costs on the soaring price of beef, for example, the Edmundses are now chipping in with other families on grocery purchases.

"Parents locally will buy a thing of ribs or whatever is on sale, and we'll go in with them and we'll split things," she said.

After spiking 1.5 percent in April, food prices jumped by another 0.7 percent in May, according to the latest Consumer Price Index data released last week by the Bureau of Labor Statistics. The beef index skyrocketed by nearly 11 percent, its largest ever monthly increase.

The pain is being felt even more acutely for specific items in some cities. New exclusive Nielsen data shows that nationwide prices for staples are on the rise. In New York, orange juice is up nearly 15 percent. In Dallas, ground beef spiked 15 percent. In Boston, eggs are up nearly 25 percent. And chicken breasts are up 26 percent in Los Angeles.

Even as some states move forward with phased reopening, elevated prices, especially for meat, will be here to stay until stressed supply chains mend, which in some parts will require coronavirus health hazards to be more contained.

The nation's previously cheap and abundant meat supply was designed around the dominance of a handful of densely populated meat packing plants where employees work shoulder to shoulder in environments that were not built with a focus on mitigating human-to-human disease transfer, said Decker Walker, a managing director at The Boston Consulting Group.

"The combination of factors [inside the meatpacking plants] make it the perfect storm for transmission," said Walker. "It's a choke point in a supply chain that's already concentrated in large amounts. When they go down, a large part of the capacity goes down."

The grocery bill pressure falls even harder on needier households. In South Central Los Angeles, Angelica Curiel relies on government assistance, known in her state as CalFresh, to feed her family of six.

But lately her food stamps don't put as much food on the table. "CalFresh used to last me a whole month. Now it only lasts me like 10 days," she said.

The family has no choice but to cut back, even on staples.

Jo Ling Kent is the business and technology correspondent for NBC News.

Ben Popken is a senior business reporter for NBC News.

Ezra Kaplan is a producer for NBC News.

The cost of meat here has really gone up.  Eggs, too.  I'm considering chipping in with a coworker to split a side of beef from a local farmer this fall.  It will be fresher, and there won't be nearly the worries about the supply chain.  For a few weeks, it was hard to find meat at our local supermarkets.  Damn hoarders.

My store has plenty of meat but the cost has gone up.

We have plenty now, but it costs more.

I'm considering chipping in with a coworker to split a side of beef from a local farmer this fall.

My dad used to do that every year when I was growing up, it was both handy and cheaper.

I bought beef cubes to make stew and I use to pay $6.00 a pound, now it is $10.00 a pound. Other things are more now too. With people out of work and living on budgets, It makes it very difficult. There is a limit too. You can only buy a certain amount.

There is plenty of food and no shortage.  People are just being stupid and they panic.

I buy Beef roasts when they're on sale and freeze them then cut them up myself when I need them. Where I live apparently it costs 3 dollars or more per pound for them to cube a roast so I'll do it myself.

I would like to do that, but cutting up raw meat makes me gag... lol

The two stores I shop at (a Kroger brand and Safeway) both have in-store butcher counters where they will cut up any selection they sell at no additional cost. Maybe that can work for you?  I can pick up port loins and all sorts of roasts when they are on sale and have them cut up as i wish.  I also have a vacuum sealer so I can store a lot of meat long-term in the freezer.

Thanks, I will request that, I will ask for soup bones sometimes.

In our area, the prices have gone up, especially on meat products.

There are limits to the quantity that you can purchase but it's doesn't look like there is a shortage.

They're saying nearly $400 a year??? Well, those people don't have two teens and a "tween" living at home. Try nearly $400 more per MONTH in my house! Before all this crap hit the fan, I was spending roughly $400 per month on groceries. Now, it's closer to $200 each week, which is roughly $400 per month MORE than I had been spending. I'm not even buying that much meat. We have a local "mom n pop" grocery store that I buy all my meats and fresh produce from, because the owner, Pete gets it from local farms. I know where my meats and produce are coming from and there aren't recalls on those things [like there currently is from Walmart / aka "Wally World"]. That market has limits on how much beef you can buy and they have for a long time. Summers always have a pound limit on beef because they know that if they allow people to purchase large quantities without specifically requesting ahead of time, they won't have enough to sell to others. That limit just happens to be lower right now forcing me to go more often. Oh well. I sure hope there's some drop in price soon. Feeding these kids is killing me!

I only have me to shop for so I don't spend too much.  I usually buy a pound of burger a week and I break it down into four servings.  I occasionally buy a few steaks and maybe a roast, but that is about it.  I have never heard of Wal Mart being called Wally World.  Out here, Magic Mountain is referred to as Wally World as it was used in the movie National Lampoon's Vacation.

A pound of beef wouldn't even feed the two teens in this house.

I usually buy a pound of burger a week and I break it down into four servings.  I occasionally buy a few steaks and maybe a roast, but that is about it.

My mom used to say "Teenagers are are all mouth and stomach."

I swear it's true! 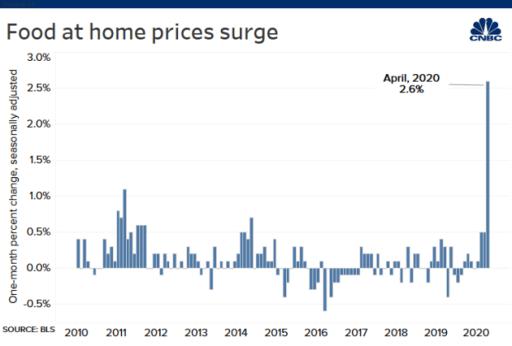 The price of steak is unreal. I am thinking it would be better to go in with my BIL for a whole cow.

I was thinking the same thing Ender. Finding someone here locally that would go in on a cow; I'm willing to bet I'd be able to find 4 or 5 people to purchase a cow with me.