Ancient dogs adapted for freezing cold helped early humans survive in the Arctic more than 10,000 years ago, according to research published Thursday in the journal Science.

Ancient dogs adapted for freezing cold helped early humans survive in the Arctic more than 10,000 years ago, according to research published Thursday in the journal Science.

The study compares the genetics of modern "sled dog" breeds - including the Alaskan and Siberian huskies used for dog-sled racing, as well as Alaskan malamutes and Greenland dogs - to DNA from a dog that lived 9,500 years ago on Zhokhov Island, above the Arctic Circle in Eastern Siberia, where archaeological evidence for early dog sleds has been found.

The researchers determined that the sled-dog breeds and the ancient dog share many of the same genes, forming a distinct lineage that reveals the antiquity of sled dogs and hints at their importance to human survival as humans spread into the Arctic near the end of the last Ice Age.

"Being able to move large amounts of material, kills and food across large spaces in such difficult terrain would have been a huge advantage," said Shyam Gopalakrishnan, a population geneticist at the University of Copenhagen and a lead author of the study along with geneticist Mikkel Sinding. "It may have been instrumental in humans settling the Arctic."

Gopalakrishnan and his colleagues compared DNA from the ancient Siberian dog to DNA sampled from 134 modern dogs, including 10 Greenland dogs - a breed thought to be close to ancient sled dogs.

They also compared DNA from the 33,000-year-old jaw of a wolf found in northeastern Siberia, which is similar to the original wolf genome that modern dogs descended from.

They determined modern sled dog breeds share a genetic lineage that is at least 9,500 years old - and suggested sled dogs could have been genetically distinct from other dogs around 15,000 years ago.

The ancient Siberian dog showed several adaptations that would have helped it survive very cold conditions, including longer fur and thick pads on its feet, which may have helped it run further on snow and ice.

There's also evidence that modern sled dog breeds can thrive on a fat-rich and starch-poor diet, which became normal for humans in the Arctic several thousand years ago when they focused on hunting marine mammals, such as seals, walruses and whales.

"Most of the food was coming from hunting, so these dogs were probably being fed leftovers from the human population living there," he said. "It could be that this adaptation is a reflection of the fact that [the dogs] are living with them."

The research also supports the idea that the domestication of dogs occurred about 35,000 years ago - much earlier than once thought.

Scientists used to believe humans domesticated dogs from wolves 10,000 to 15,000 years ago, but genetic evidence supports the much earlier date.

"Dogs already had different populations 10,000 years ago, and one would imagine that domestication happened quite a bit of time before that," Gopalakrishnan said. "So the original idea of 10,000 to 15,000 years for domestication just doesn't hold."

Robert Losey, an archaeologist at the University of Alberta at Edmonton, who has studied ancient dog sledding in Russia and North America, said the research pushes back the earliest date for dog sledding to at least 10,000 years ago. "These dogs have adapted to living with people in the Arctic, in these cold environments, really early on."

Losey said ancient dog-sledding was probably unlike modern dog-sledding, where up to 20 dogs pull large sleds and several people.

"My guess is that there were just one or two dogs, maybe pulling a sled, or pulling a sled in combination with people," he said. "And they probably carried packs on their back."

Animal geneticist Ben Sacks of the University of California at Davis said the study cast light on the origins of Neolithic dog breeds, including Greenland and Inuit dogs and the wild dogs of Australia and New Guinea.

"Both American Indigenous [dogs] and the wild dingoes of Australasia are under a great threat of extirpation, so the study should provide an impetus for efforts to conserve these populations," he said.

A really interesting article. I owned an Alaskan Malamute, Tara, for years and they are a bit different than most other dogs.

Song Dog Kennels in Oregon is the only legit breeder and expert on this ancient breed.

This is an American Indian Dog. 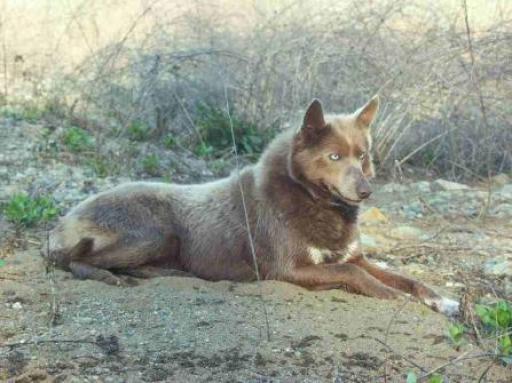 What a beautiful animal!

They all have cold steel-blue or a grayish yellow eyes and very pointed ears. They can be a number of different colors and some are long hair and others look more short hair.

They are virtually immune to most dog illness and have a life expectancy of 18 years. They also need a lot of room since they are working dogs and excellent baby sitters and guard dogs.

Another one, different color, and a bit longer fur/coat. 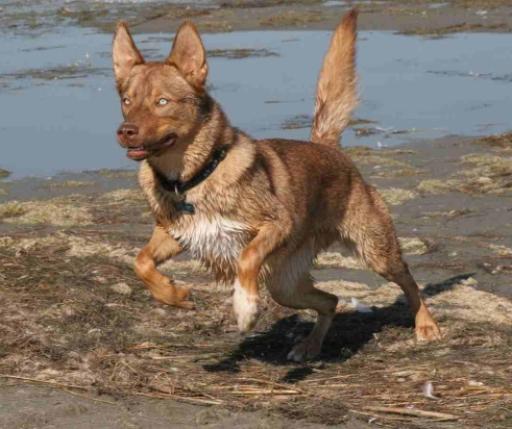 They would make good cow dogs.

Interesting article, it does push suspected timelines back a bit

What is the cost of these beautiful dogs?

The last time I checked it was $600. Plus you had to be accepted by Song Dog kennels as a very responsible owner.