I cannot figure out in my wildest dreams why they would want to do that,” Fauci told The Atlantic, in reference to the White House document. “I think they realize now that that was not a prudent thing to do, because it’s only reflecting negatively on them. “I can’t explain Peter Navarro,” he added. “He’s in a world by himself.”

The nation’s top public-health expert tells  The Atlantic   that he isn’t going anywhere, despite the Trump administration’s newest attempts to undercut him. 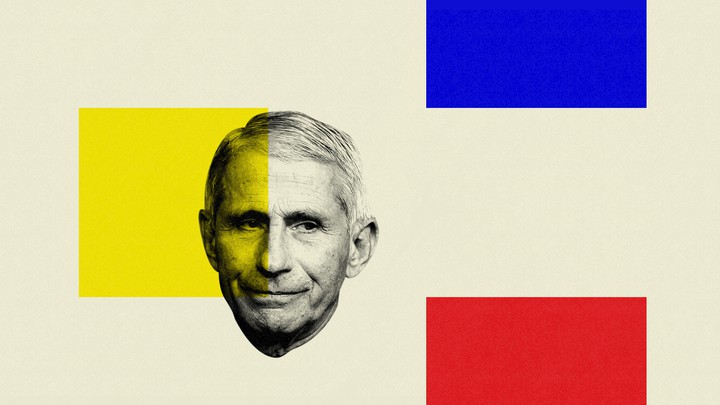 Anthony Fauci isn’t about to quit, despite the White House’s clumsy attempts to stain his public image. More so now than at any other point in their uneasy partnership, it seems that if President Donald Trump wants to be rid of Fauci, he’ll need to fire him. In recent days especially, the White House has stepped up efforts to discredit Fauci, a move he describes as “bizarre.”

“Ultimately, it hurts the president to do that,” Fauci told   The Atlantic   in a series of interviews this week. “When the staff lets out something like that and the entire scientific and press community push back on it, it ultimately hurts the president.”

He described the White House attacks against him as “nonsense” and “completely wrong.” He also seemed dismayed that they are coming at a time when COVID-19 is surging across the country, deaths are once again rising, and Americans remain deeply confused about how to keep themselves and their loved ones safe.

Targeting Fauci seems like a tragic misuse of White House time and energy if officials’ aim is to defeat the coronavirus. But Trump appears more concerned with discrediting Fauci. Over the weekend, the White House sent multiple news outlets a document that smacked of opposition research. It carried a list of statements Fauci had made about COVID-19,   purporting to show   that he had contradicted himself about the outbreak and that he “has been wrong on things.” In one example from an NBC interview in February, the White House omitted Fauci’s full quote, giving the impression that he’d misjudged the outbreak’s danger. Peter Navarro, Trump’s top trade adviser,   wrote an   op-ed   for   USA Today   yesterday claiming that Fauci has been “wrong about everything I have interacted with him on.” (A Trump communications aide   tried to distance   the White House from the op-ed this morning.)

The attempt to discredit Fauci’s public-health expertise is a political move, and one with disastrous implications. As much as Trump wants and needs Americans to see the virus as a nuisance that’s soon to be overcome, Fauci is a recurring reminder that the crisis remains a grave and enduring threat, and that Trump has mishandled the pandemic. The Americans who believe the White House’s anti-science campaign risk cutting themselves off from potentially life-saving information.

“I cannot figure out in my wildest dreams why they would want to do that,” Fauci told   The Atlantic , in reference to the White House document. “I think they realize now that that was not a prudent thing to do, because it’s only reflecting negatively on them.

“I can’t explain Peter Navarro,” he added. “He’s in a world by himself.”

My colleague Ed Yong   and I spoke with Fauci in two interviews over the past 24 hours—about the oppo against him, the private discussion he had later with White House Chief of Staff Mark Meadows, and the nation’s faltering response to the virus’s resurgence. What follows is an edited and combined transcript of our conversations.

The Atlantic :   In your 36-year history as director of the National Institute of Allergy and Infectious Diseases, has anything like this ever happened to you? What do you think about the White House’s claim that you made inaccurate statements about the pandemic?

The Atlantic :   Why did the White House do this?

Fauci:   Well, that is a bit bizarre. And I have to tell you, I think if I sit here and just shrug my shoulders and say, “Well, you know, that’s life in the fast lane ...”

I think if you sit down and talk to the people who are involved in that list that came out, they are really, I think, taken aback by what a big mistake that was. I think if you talk to reasonable people in the White House, they realize that was a major mistake on their part, because it doesn’t do anything but reflect poorly on them. And I don’t think that that was their intention. I cannot figure out in my wildest dreams why they would want to do that. I think they realize now that that was not a prudent thing to do, because it’s only reflecting negatively on them.

I can’t explain Peter Navarro. He’s in a world by himself. So I don’t even want to go there.

The Atlantic :   You met Monday with Mark Meadows, the White House chief of staff. What did you tell him?

Fauci:   I said that that was not particularly a good thing to do. Ultimately, it hurts the president to do that. When the staff lets out something like that and the entire scientific and press community push back on it, it ultimately hurts the president. And I don’t really want to hurt the president. But that’s what’s happening. I told him I thought it was a big mistake. That doesn’t serve any good purpose for what we’re trying to do.

The Atlantic :   Did Meadows offer an explanation or an apology?

Fauci:   No. There was no apology. He said that he didn’t know about it.

The Atlantic :   Given this experience, do you still want to work with the administration? Have you thought about resigning?

Fauci:   No. I think the problem is too important for me to get into those kinds of thoughts and discussions. I just want to do my job. I’m really good at it. I think I can contribute. And I’m going to keep doing it.

The Atlantic :   There’s been some reporting that the Trump administration has tried to cut back on your TV interviews. Isn’t it important at this moment for the nation and the world to hear from you?

Fauci:   I can’t make a comment on that, but I think you know what the answer to that is.

The Atlantic :   Can you update us on your relationship with the president?

Fauci:   Well, the scene has changed a bit. When we were having frequent press briefings, I had the opportunity to have a personal one-on-one to talk to the president. I haven’t done that in a while. But a day does not go by that I am not in contact with Debbie Birx [the White House coronavirus-response coordinator], with Bob Redfield [the director of the Centers for Disease Control and Prevention], or Steve Hahn [the commissioner of the Food and Drug Administration] and others. My input to the president goes through the vice president. But clearly, the vice president—literally every day—is listening to what we have to say, there’s no doubt about that.

The Atlantic :   Do you know why it is that you don’t talk to President Trump more often?

The Atlantic :   Everyone who knows you has talked about the fact that you are indefatigably honest; that is your reputation, someone who always tells the truth. Can you tell us the truth about the federal response to the pandemic?

Fauci:   When you look at the numbers, obviously, we’ve got to do better. We’ve got to almost reset this and say, “Okay, let’s stop this nonsense.” We’ve got to figure out,   How can we get our control over this now, and, looking forward, how can we make sure that next month, we don’t have another example of California, Texas, Florida, and Arizona?   So rather than these games people are playing, let’s focus on that.

The Atlantic :   How much worse do you expect the pandemic to get? How do we get back to a better place?

Fauci:   By pushing a reset button, I don’t mean everybody locking down again. We’ve got to call a time-out and say, “If you’re going to open, we’ve got to get everybody on the same team.” I’m not going to name any states—that’s not helpful—but some states did, in fact, prematurely jump over some checkpoints.

Even though we are in the middle of a setback now—you can’t deny that; look at the numbers, you’re dealing with 40,000 to 60,000 infections in a day—it doesn’t mean we’re going to be defeated. But states that are in trouble right now, if those states pause and say, “Okay, we’re going to do it right, everyone wear a mask,   bars closed , no congregating in crowds, keep your distance, protect the vulnerable”—if we do that for a few weeks in a row, I’ll guarantee you those numbers will come down.

The Atlantic :   We recently   published a piece   about burnout among public-health experts trying to fight this pandemic. You clearly have been very much a part of that. How are you doing? How are you coping?

Fauci:   I’m doing okay; I’m doing fine. I am running a bit on fumes, but as they say, the fumes are really thick. It’s enough to keep me going. I wish we didn’t have a lot of those distractions, which I think are noise that gets in the way. But I put that aside, try not to let it bother me, and just move ahead.

Fauci brushes off the White House like you would brush lint off your shoulder.

Trump now seems incapable of making a wise move. His lapdogs , and himself, belittle Fauci to no effect. Nothing Trump does now works to his benefit.

Navarro's Facebook comment about Fauci was beyond bizarre. If you believe he went outside the WH review I'm got a bridge to sell you. I'm waiting to see what punishment he'll receive for breaking the WH protocol.../s

The White House thinks they can undermine Fauci, but , of course, the exact opposite is happening.

I think Dr Fauci show great restraint when I'm sure he wants to shout that Trump is a fucking moron.  Maybe if Keebler could make a yugeeeeeee cookie so that Trump could just go to a corner to eat it and let this pandemic be handled by adults.

The mass of people will eventually gravitate to someone who knows what he is talking about.  Fauci has a long track record of expertise in his field.  Trump has expertise in only a small handful of things - cheating, lying, being a crook and being an asshole.  When it is Trump vs. Fauci Trump will get 35% of support, the Trump diehards.

It's a shame that this happened to a man of science who has served under the last 5 presidents. He didn't deserve this, especially from Navarro.

"I can't explain Peter Navarro," he said. "He's in a world by himself."

Navarro, a trade adviser, is going around telling people that Fauci, an epidemiologist with years of experience, doesn't know what he's talking about.

Navarro is the hitman for Trump, simple as that Trout. Fortunately, he shot himself and the administration in the foot. Further enhancing the view that those leading our country are nothing more than the ''Gang That Couldn't Shoot Straight''.

I can't explain Peter Navarro," he said. "He's in a world by himself.

Most Trump supporters are in La-la land.

Most Trump supporters are in La-la land.

Although little by little, many are starting to realize the truth and are turning against him.

In fact there are several groups of ex-Trump-supporters. Ome that does some powerful ads is The Lincoln Project.

In fact there are several groups of ex-Trump-supporters. One that does some powerful ads is The Lincoln Project

Here's their video they recently put out re: Fauci:

Once a vaccine is developed and we are past this, watch, Trump will claim he was correct.  He will claim his "magic" words "It's going to disappear." defeated this.