Some states said they were running out of places to store bodies as the country reported its highest daily death toll in more than a month. 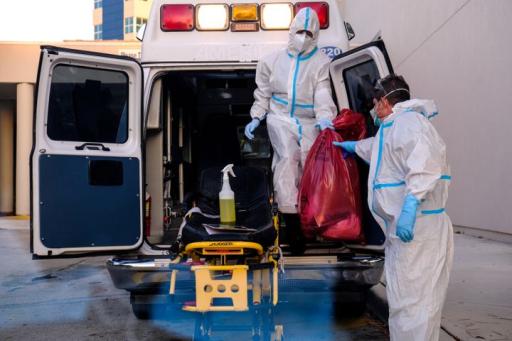 Americans have become increasingly divided on issues such as the reopening of schools and businesses and wearing face masks in public, hindering the fight against the virus.

On Thursday, Texas reported over 15,000 new cases, according to a Reuters tally of county data, while Florida reported nearly 14,000 new cases and California almost 10,000.

Dr. Anthony Fauci, the government’s top infectious diseases expert, has warned that cases could soon top 100,000 a day if Americans do not come together to take steps necessary to halt the spread of the virus.

On Thursday, Texas reported over 15,000 new cases, according to a Reuters tally of county data, while Florida reported nearly 14,000 new cases and California almost 10,000.

He's desparate to try to draw peoples' attention away from the ongoing spikes in the Corona-Virus, the increasing deaths-- and his role in allowing (even encouraging) its spread.

So he keeps looking for some issue in a futile attempt to draw people's attention away fromthe virus-- an new issue, an old issue-- anything to try to distract people!

But if the polls are even partly accurate-- his desparate plys are not working . . .-e

Pretty sure that the most important issue for the president to be dealing with right now is civil war statues being messed with./s

He and his Republican cronies have pretty well run out of things to criticize and blame China for, and to criticize and blame the WHO for, so what's his next attempt to draw attention away from his causing the tragedies his incompetent leadership has caused?  Aliens from another planet have taken the form of humans and are destroying our world?  I think there's already a movie or two about that.

Pretty sure that the most important issue for the president to be dealing with right now is civil war statues being messed with./s

After all-- what could be more important than honoring soldiers-- who were traitors to our country?

If our very own "Orange Nazi" runs out of things to blame China for, he will find other countries to blame,,,for all of his failures!

If when he tires of blaming WHO, the are a gazillion other organization to blame for his failings,

(And trump groupies are like a religious cult-- they believe every word he says!)

(And trump groupies are like a religious cult-- they believe every word he says!)

Heck, they'll believe anythingTrump or anyone in the Trump family are selling-- even beans! 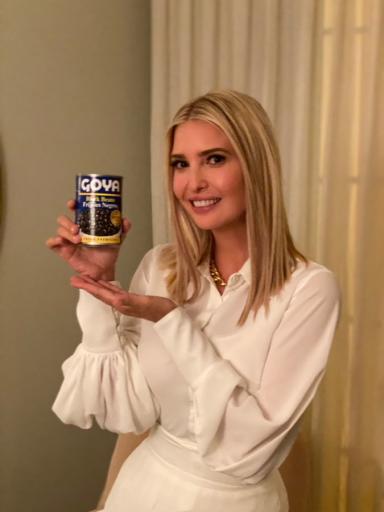 BTW if anyone missed it-- that is not a photoshop-- its an actual photo from the Trump crime family's new venture-- yes, they are pushing their mentally-challenged followers to buy Goya products!

What surprises me about the American people is that the difference between Trump and Biden isn't in the 20s at least at this time.  I guess incumbancy is a powerful cause.

I have to wonder if Ivanka advertising for Goya could lead to legal action for/from both Goya and the WH.

There is also the chance that conflict of interest on Ivanka's side. And the same goes for the President, who has cone the same thing thinking no one would dare blame him. However, a good Prosecutor can prove them both wrong, as well as taking a piece of Goya.

Chances are, Goya will try to say that they didn't know what the Trumps were doing until after they ran the ads.

All I can say is.......they should all think before they create a stink.