President Donald Trump suggested that bases named after Confederate soldiers should not be renamed because he could think of no Black war heroes deserving of the honor. Trump made the remarks during an interview in which Fox News host Chris Wallace noted that legislation funding the Department of Defense could also force some bases to […]

Trump is such an irredeemable nunu...

President Donald Trump suggested that bases named after Confederate soldiers should not be renamed because he could think of no Black war heroes deserving of the honor.

Trump made the remarks during an interview in which Fox News host Chris Wallace noted that legislation funding the Department of Defense could also force some bases to be renamed.

"You're going to veto that?" Wallace asked.

'I did more for the military than any president!" Trump exclaimed.

"But you're going to veto this bill?" Wallace pressed.

"I think that Ft. Bragg, Ft. Robert E. Lee — all of these forts that have been named that way for a long time — decades and decades," the president opined.

"But the military says they are for this," Wallace pointed out.

"Excuse me," Trump continued. "I don't care what the military says. I'm supposed to make the decision. Ft. Bragg is a big deal. We won two world wars. Nobody even knows Gen. Bragg."

Trump reminded the Fox News host that the United States "won two beautiful world wars that were vicious and horrible."

"And now, they want to throw those names away," he complained. "And I'm against that."

He is so disgusting.   When all else fails, racism is his fall back position.

Racism did get him quite far...so far! It's wearing off.

Every day more and more Americans are finding him repulsive.

Morning Gs...Can assure you it is not just Americans..we to shake our head and wonder what he will say and do next. I have always given President Trump the benefit of the doubt, but even I find he is now more than a "Koala can bare"...

G'day shona.  Sensible Americans understand it is sensible people all over the world.  However, giving Trump the benefit of the doubt, especially at this point, is not too sensible I'm afraid. I don't know anyone who does.

Ft Bragg is dubbed the “ Home  of the Airborne and Special Operations  Forces ,” Quite fitting to have the name changed to Ft. Melvin Morris rather than a Confederate General that fought against the U.S. 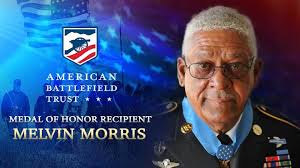 Good choice. The reason I choose SGT Morris is that he entered the service at Ft. Bragg and was a long time member of the Special Forces which are domiciled at Ft. Bragg.

I can understand that. I suggested Miller because he is from Waco where I live. pretty interesting story about him  and the attack on Pearl harbor

I will have to look him up!

if you ever run across it, it is pretty cool. and all true, some written by the actual combatants and some told to journalists.

Indeed it is an interesting story about a real hero..

I'll have to check that one out.. Thanks

one thing I really liked is the stories were from all fronts. kind of gave you a feel of the period

Good info and gives a bigger picture. For sure I'll be checking it out.

Evening shona, it would be a fitting honor for a true hero.

So he doesn't care what the military wants...

I guess he spoke the truth for once.

He is supposed to make the decision...

Since when? Contrary to his belief, not everything is his decision.

CMH..in fighting in Harman, Korea.... Sacrificed his life to allow the rest of his platoon to escape  an estimated company size force.   According the the book "Above and Beyond" History of the Congressional Medal of Honor", when he was last seen by a member of his platoon, he had run out of ammunition and was throwing rocks at the enemy from the top of a hill to slow them down.

See if you can get a copy of the book...... There are some incredible accounts of selflessness in there.

The CMH was handed out like candy during the Civil War, but became the rarity of today during WWI.

I think he should go ahead and allow the name changes, especially if the military is for it.

seemingly at a loss for the names of Black war heroes

Why specifically does it seem that way? Was he supposed to come up such names? He wasn't asked to come up with any such thing. It hasn't even been suggested. As near as I can tell, this assertion that he came up with Al Sharpton because he was at a loss to name any black war heroes is totally made up.