By:   Ben Collins and Brandy Zadrozny

Twitter said it has begun taking sweeping actions to limit the reach of QAnon content, banning many of the conspiracy theory's followers because of harassment.

Twitter announced Tuesday that it has begun taking sweeping actions to limit the reach of QAnon content, banning many of the conspiracy theory's followers because of problems with harassment and misinformation.

Twitter will stop recommending accounts and content related to QAnon, including material in email and follow recommendations, and it will take steps to limit circulation of content in features like trends and search. The action will affect about 150,000 accounts, said a spokesperson, who asked to remain unnamed because of concerns about the targeted harassment of social media employees.

The spokesperson said that as part of its new policy, the company had taken down more than 7,000 QAnon accounts in the last few weeks for breaking its rules on targeted harassment.

The sweeping enforcement action will ban QAnon-related terms from appearing in trending topics and the platform's search feature, ban known QAnon-related URLs and prohibit "swarming" of people who are baselessly targeted by coordinated harassment campaigns pushed by QAnon followers.

The spokesperson said that while the targeted enforcement fell under Twitter's existing platform manipulation rules, its classification of QAnon material and behavior as coordinated harmful activity was a new designation. The spokesperson said Twitter was acting now because of rising harm associated with the conspiracy theory.

QAnon is a right-wing conspiracy theory that centers on the baseless belief that an anonymous tipster is revealing how President Donald Trump is leading a secret war against a so-called deep state — a collection of political, business and Hollywood elites who, according to the theory, worship Satan and abuse and murder children. The conspiracy theory's roots grew from Pizzagate, which claimed that Hillary Clinton ran a pedophilia ring from a Washington, D.C., pizza shop. QAnon emerged from the fringes of the internet's conspiracy community to become a recognized political phenomenon, with Trump supporters showing up at events with "Q" merchandise. QAnon followers have also been implicated in armed standoffs, attempted kidnappings, harassment and at least one killing since the conspiracy theory first gained traction on the internet in October 2017.

Despite no evidence and numerous predictions that failed to materialize, QAnon support has trickled into the mainstream, with numerous Republican candidates for Congress openly espousing their support.

And the coronavirus pandemic has only added more momentum to what is now a QAnon movement that has found common ground with other fringe internet communities, including anti-vaccination groups. In recent months, coordinated QAnon campaigns pushed fringe hashtags like #Obamagate and #SubpoenaObama into trending topics that Trump ultimately promoted.

Some QAnon supporters have also become more organized and aggressive in attacking celebrities. QAnon followers frequently comb through social media posts and Instagram pictures of Trump's famous political opponents, intentionally misinterpreting benign photos as proof that the celebrities are eating children. The followers then target the celebrities with harassment campaigns, coordinated by influencers in the QAnon community on Twitter, Instagram and YouTube.

TV personality and author Chrissy Teigen has been a constant target of harassment by QAnon and Pizzagate accounts in recent weeks. The harassment campaign has targeted some of her friends, some of whom are private figures, who have had their Instagram accounts swarmed by conspiracy theorists posting violent threats.

We will permanently suspend accounts Tweeting about these topics that we know are engaged in violations of our multi-account policy, coordinating abuse around individual victims, or are attempting to evade a previous suspension — something we've seen more of in recent weeks.
— Twitter Safety (@TwitterSafety) July 22, 2020

This type of harassment campaign is known as "swarming" or "brigading," and Twitter said the swarms will no longer be allowed on the platform. Twitter will ban users who threaten users during QAnon-related swarms and will limit the reach and search visibility of those who participate in them.

A Twitter spokesperson said the anti-harassment policy could apply to other groups that are motivated primarily by targeted harassment.

QAnon conspiracy theorists falsely claimed on Twitter, Reddit and TikTok this month that the furniture company Wayfair was shipping trafficked children because price glitches raised the prices of pillows and cabinets to tens of thousands of dollars. The company's name was the top trend on Twitter in the U.S. on July 10 as Twitter users posted links to expensive furniture.

The company released a statement reiterating that some cabinets had been priced appropriately and that a glitch had affected the prices of some personalized pillows.

Still, the conspiracy theory has continued to rage among some TikTok users who did not know it was initially posited by a QAnon influencer on Twitter.

Reddit has similarly banned brigading, in which users of one community target another community with harassment in a coordinated fashion.

Flynn is a QAnon member..LMAO, so much for being based in reality.

If Trump gets re-elected you'll probably see Flynn back in the administration in the new Minister of Conspiracies and Propaganda position, a new addition to Trump's cabinet.

Qanon needs to slither back to the swamp it came from.  Unfortunately they have gained traction within the party of Trump and what was the GOP.

I suspect that there are a couple of Qanon followers that post here on NT.

I'm familiar with Aon  it is the training ground of Manchester United the greatest football club in the world never heard of  Qanon.

For such a nonsensical conspiracy it amazes me how far its purification has poisoned people that should have never been dumb enough to fall for such crap. 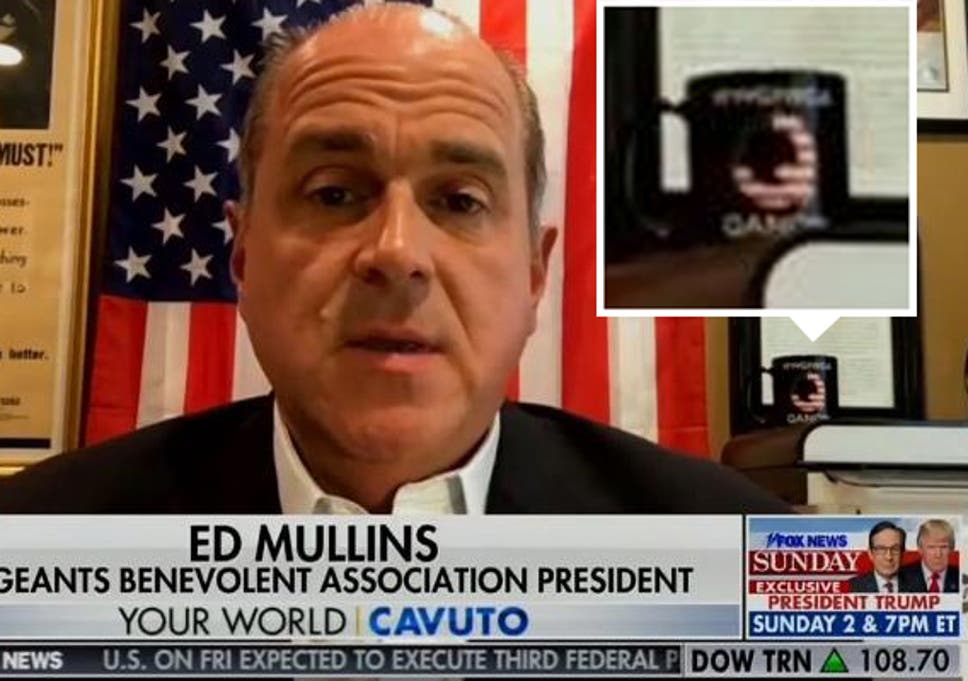 Ed Mullins, president of the NYPD Sergeants Benevolent Association, appeared on the cable news network with a mug showing the logo The mug situated directly behind Mr Mullins in the camera shot has the word “QANON” across the front with the hashtag #WWG1WGA, which stands for “where we go one, we go all”. The phrase is a popular slogan within the QAnon group.

Lets not worry about what a complete shithole that every democrat city has become, lets not worry that Chicago is a shooting Gallery, Portland is a war zone, Lets worry about a conspiracy group......Yeah that will keep the low functioning busy,  Hey twitter how about you just shut off service to Portland so violent animals can't organize?  No, lets not do that, that would make to much sense.  I that Qanon is the new tea party boogie man to the pathetic snowflakes on the left, be afraid bitches, be very afraid.

QAnon got real when Epstein went down. Makes me wonder what is Jack Dorsey trying to hide or who is pulling his strings.

Makes me wonder what is Jack Dorsey trying to hide

He's a coward, pick a harmless right wing organization to target in order to keep the violent animals on the left like antifa mollified, What he doesn't realize is they will be coming for him next.  None of these jackasses can control these animals now that they have broken off their leash.

Nothing funnier than the QAnon hoax created on 4chan to create hysterical media. I can't believe it's still going on. Talk about getting hoaxed.......

Are you trying to say that Michael Flynn fell prey to a hoax?   Maybe he's not smart enough to be in government.

Not the sharpest knives in the drawer.

There are several GOP running for office on the QAnon ticket. The best and brightest the GOP has to offer these days.

I guess the going to their own platform isn't working out.

No fun trolling each other.

I read they use some kind of bot mechanism to attack people. Swarm them.

But if Twitter clamps down on QAnon - were will we get our daily fix of right wing conspiracy theories and limp brained foolishness to mock?