Connie Culp, the first face transplant recipient in the United States, has died at the age of 57, according to the Cleveland Clinic, which performed the surgery.

Connie Culp, the first face-transplant recipient in the United States, has died, according to the Cleveland Clinic, which performed the surgery.

"We are saddened by the loss of Connie Culp," the clinic said on Twitter on Friday, adding that she was Clinic "an inspiration to all of us" at the medical facility.

The exact cause of death for Culp, who was 57, has not been released, but she had been in the hospital for several days, NBC-affiliate WKYC in Cleveland, Ohio, reported.

"Connie was an incredibly brave, vibrant woman and an inspiration to many. Her strength was evident in the fact that she had been the longest-living face transplant patient to date," Dr. Frank Papay, chair of the Cleveland Clinic's Dermatology and Plastic Surgery Institute, said in a statement. "She was a great pioneer and her decision to undergo a sometimes daunting procedure is an enduring gift for all of humanity."

We are saddened by the loss of Connie Culp, the first face transplant recipient in the U.S.
She was an inspiration to all of us at Cleveland Clinic. pic.twitter.com/gvuJCzf7Jd
— ClevelandClinicNews (@CleClinicNews) July 31, 2020

Culp arrived at the Cleveland Clinic in 2004 after her then-husband shot her in the face before turning the gun on himself. He survived and was sent to prison for seven years.

In 2008, doctors began a 22-hour procedure to replace 80 percent of Culp's face with that of a deceased donor. Before receiving the transplant, Culp had already undergone nearly 30 other corrective surgeries.

A few years after the transplant surgery, Culp was able to meet the family of the woman whose face had been donated to her. The donor, Anna Kasper, 44, had died of a heart attack two weeks before Christmas 2008.

"I'm so glad you did this for me," Culp told Becky Kasper, Anna's daughter, in an emotional encounter caught on camera by ABC News. "What do you say? I mean, thank you's not strong enough, you know."

Connie Culp, before the injury to her face.Cleveland Clinic / via AP

While the transplant could never return Culp's original looks, it helped her regain senses that had been lost after the shotgun blast shattered her nose, cheeks, the roof of her mouth and an eye.

Culp said In 2009 that the smell of soap made her realize her new face was working.

Two years later, she told "TODAY" she could smell again, but "only good things" such as cooking, perfume and flowers brought to her by her 4-year-old old grandson, Maddox. Culp also said she was able to eat anything, including a good steak, after years of just eating soft foods.

After the transplant, Culp dedicated years of her life to sharing her story and speaking out about domestic violence, as well as educating and encouraging others who were to undergo transplant surgeries.

A year before her ex-husband, Thomas, was released from prison in 2011, Culp told journalist Diane Sawyer that while she would always love him because they have two children together, "I cannot be with him anymore."

Culp's remarks came months after she told Oprah Winfrey that her daughter, Alicia, helped her realize she could never take Thomas back when she asked, "What kind of example would you set for me if you went back to the man that shot you?"

She told "TODAY" that she tried to not dwell on memories of the shooting or the way she used to look, but she often had to deal with stares and comments from strangers, particularly children, according to a 2010 profile in The Plain Dealer in Cleveland.

Once, months before the transplant surgery, Culp glued on a prosthetic nose before going out to lunch with her sister, the Plain Dealer reported.

"Connie," Oberline whispered at one point during the meal. "Your nose is coming loose."

"I know, damn it," Connie whispered back, then peeled off the nose, put it into her purse and continued eating.

A few weeks later, they went back to the same restaurant, and Culp ran face-first into the restaurant's glass doors.

"It's a good thing I didn't have my nose on," she said, according to Oberlin. "It would've smooshed into my face."

"Thinking about Connie is thinking about someone who's not giving up, and I'll not give up," she told WKYC. "We are connecting the donor and recipient bone marrow cells to support face transplantation and other organ transplants in order to induce tolerance and reduce the need for lifelong immunosuppression."

Nicole Acevedo is a reporter for NBC News Digital. She reports, writes and produces stories for NBC Latino and NBCNews.com.

She is/was an inspiration. What's horrifying is the husband only got 7 years for shooting her in the face.

What's horrifying is the husband only got 7 years for shooting her in the face.

Pretty appalling.  After he shot his wife, he put the barrel of the gun in his mouth and fired, causing severe injuries. 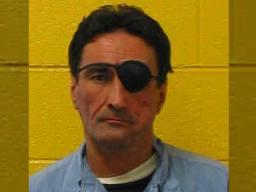 In my opinion, they weren't severe enough.

You're right, he doesn't look like he suffered much. An eye for a face ? Not nearly the right price.

For what he did, he should have received no less than 20 to life, preferably life.

Another incredible take-away from this story was a conversation Connie had with her daughter a year before Thomas Culp was released from prison.

Culp told journalist Diane Sawyer that while she would always love him because they have two children together, "I cannot be with him anymore."

Culp's remarks came months after she told Oprah Winfrey that her daughter, Alicia, helped her realize she could never take Thomas back when she asked, "What kind of example would you set for me if you went back to the man that shot you?"

She raised her daughter to be every bit as strong as she was.