Many children were physically and sexually abused at the schools, and up to 6,000 died at schools in Canada

Mass grave with remains of 215 children found at Indigenous school in Canada, an 'unthinkable loss'

KAMLOOPS, British Columbia — A mass grave containing the remains of 215 children, some as young as 3 years old, has been found on the site of what was once Canada's largest Indigenous residential school.

The school is one of the institutions that held Indigenous children taken from families across the nation.

Chief Rosanne Casimir of the Tk'emlups te Secwépemc First Nation said in a news release that the remains were confirmed last weekend with the help of ground-penetrating radar.

More bodies may be found because there are more areas to search on the school grounds, Casimir said Friday.

In an earlier release, she called the discovery an "unthinkable loss that was spoken about but never documented at the Kamloops Indian Residential School." It was the once the site of Canada's largest residential school.

From the 19th century until the 1970s, more than 150,000 First Nations children were required to attend state-funded Christian schools as part of a program to assimilate them into Canadian society. They were forced to convert to Christianity and not allowed to speak their native languages. Many were beaten and verbally abused, and up to 6,000 are said to have died. (Cont'd) 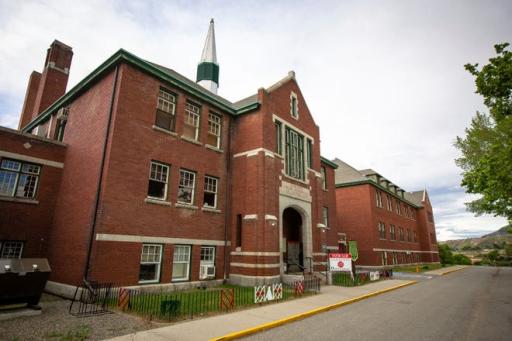 Many children were physically and sexually abused at the schools, and up to 6,000 died at schools in Canada, according to government officials. Reports Friday of a  mass grave containing the remains of 215 children  found on the site of Canada's former Kamloops Indian Residential School are a stark reminder of the dark history.

"It was obscene what happened in Canada, and I know from speaking to survivors of Indian boarding schools in the United States, this was not isolated to Canada," said Mary Ellen Turpel-Lafond, director of the Indian Residential School History and Dialogue Centre at the University of British Columbia and a member of the Muskeg Lake Cree Nation.

More than 350 Native American boarding schools were established across 30 states "to implement cultural genocide through the removal and reprogramming of American Indian and Alaska Native children," according to the Native American Boarding School Healing Coalition.

Hundreds of thousands of Native American children in the U.S. were voluntarily or forcibly removed from their homes and families and placed in the schools from 1869 to the 1960s, according to the coalition.

"There’s been tremendous impacts on individuals, families and communities, and those impacts have been across generations – the impacts on language maintenance, the transmission of cultural knowledge, just having people away for those childhood years," Lomawaima said.

U.S. Army officer Richard Henry Pratt founded one of the first off-reservation, federally funded schools in 1879 – the Carlisle Indian Industrial School in Pennsylvania. Children at the school were forced to cut their hair, adopt uniforms and speak English.

"Indian Schools were designed to destroy American Indian cultures, languages and spirituality. Students had to accept white culture, the English language, and Christianity,"  according to  the Ziibiwing Center of Anishinabe Culture & Lifeways in Mount Pleasant, Michigan. The Mount Pleasant Indian Industrial Boarding School operated from 1893 to 1934, with an average enrollment of 300 students a year.

The schools were overcrowded and unsanitary and provided poor education and medical services, a  1928 report , known as the Merriam Report, found. Children were malnourished, diseases spread rapidly, and the schools relied on manual labor the report said would be "prohibited in many states by the child labor laws.

Lomawaima said her father, of the Creek Nation, ended up at Chilocco Indian School when his probation officer sent in an application.

"There were not many schooling opportunities for Native people in the 1920s and 1930s in Oklahoma, so if people wanted an education, particularly a high school education, they didn’t have many options. So some people chose to go to Chilocco – but is that voluntary?" she said.

Even as late as 1969, many teachers at the schools still saw their role as that of "civilizing the native," according to what became known as  the Kennedy Report , which declared Native American education in the U.S. a "national tragedy."

The reckoning on Native American boarding schools differs greatly in the U.S. versus Canada, which has paid out billions in reparations to victims and families.

"The truth and reconciliation process has been a very public one in Canada," Lomawaima said. "There’s not been that scale of public engagement in the U.S."

In the U.S. in 2009, President Barack Obama signed the   Native American Apology Resolution , apologizing for, among many other things, "the forcible removal of Native children from their families to faraway boarding schools where their Native practices and languages were degraded and forbidden."

In 2012, the nonprofit National Native American Boarding School Healing Coalition formed in the U.S. to "develop and implement a national strategy that increases public awareness and cultivates healing for the profound trauma experienced by individuals, families, communities, American Indian and Alaska Native Nations."

The Truth and Reconciliation Commission in Canada did an exhaustive study and combing over records identified over 4,000 Indian children that died while at the Residential Schools. Many records were incomplete and many children just disappeared. This latest horrific discovery is one of many that will be found if the use of ground-penetrating rader is used at all the residential schools. This is something that the 1st Nations people have been fighting for since the commission completed it research in 2015. There are verified accounts of native children that froze to death trying to escape the school the latest in the 1970s in Kenora Canada.

In the US they were called ''Indian Boarding Schools'' and were also houses of horror for Native children. The last of the US so-called school closed in the 1990s. Those still left are under Indian control. Unlike Canada, the US government has mostly avoided what they created and the so-called apology in 2009 by President Obama was a nothing burger.

In 1993, the  U.S. Congress  devoted an entire resolution to apologizing to Native Hawaiians for overthrowing their kingdom in 1893. But a U.S. apology to Indigenous tribes took until 2009 and came stealthily tucked away in an unrelated spending bill.

If you just happened to be reading the 67-page  Defense Appropriations Act of 2010  (H.R. 3326), tucked away on page 45, in between sections detailing how much of your money the U.S. military would spend on what, you might notice Section 8113: "Apology to Native Peoples of the United States."

Sorry for the 'Violence, Maltreatment, and Neglect'

"The United States, acting through Congress," states Sec. 8113, "apologizes on behalf of the people of the United States to all Native Peoples for the many instances of violence, maltreatment, and neglect inflicted on Native Peoples by citizens of the United States;" and "expresses its regret for the ramifications of former wrongs and its commitment to build on the positive relationships of the past and present to move toward a brighter future where all the people of this land live reconciled as brothers and sisters, and harmoniously steward and protect this land together."

But, You Can't Sue Us for It

Of course, the apology also makes it clear that it in no way admits liability in any of the dozens of lawsuits still pending against the U.S. government by Indigenous peoples.

As you can see the US apology was hidden in a defense bill and they made sure that they did not admit liability. Typical of the way Indians in the US are treated.

In fact, some states changed laws to stop Indians from suing the various religious groups, South Dakota being one of them

Indian children were forcibly removed from their homes and sent to ''Boarding Schools'' some never to be seen again.

When you enter the ground of the Carlisle Indian School in PA. the first thing you see is a graveyard of native children.

Wahpeton Indian Boarding School in ND has a horrific history. It's a boarding school that I am very familiar with.

Canada at least admitted to it in public and paid reparations, the US continues to sweep it under the rug.

When Indian children first arrived at the ''school'' our hair was cut off, you were stripped of your clothes you were not allowed to speak your language. Beating, sexual abuse, hard manual labor and little food were the order of the day.

The vast majority of the schools were run by religious organizations all of them including the US government have the blood of an untold number of Indian children on their hands.

This is a link to the personal story of one survivor.

This is a link to the personal story of one survivor.

As I read Mary's article, I kept wondering who in the federal government thought that stripping a child's culture from them was a good idea.  I'm thinking that moosh noosh isn't strong enough of an adjective.

It was the entire US Government that felt that way. It was ''Kill the Indian save the man/child''

When they couldn't kill us off, they decided to try and do it by killing our cultural identity. In a way, it was almost a perfect genocide. The youth would just be gone and disappear into the white man's world. How diabolical. In a country that celebrates the cultural heritages of Europe, they were trying to deny that to the only real Americans.

When one flees tyranny, one packs it in a steamer trunk ... it may prove 'useful'.

In the US they were called ''Indian Boarding Schools'' and were also houses of horror for Native children. The last of the US so called school closed in 1980. Unlike Canada the US government has mostly avoided what they created and the so called apology in 2009 by President Obama.

In 1993, the  U.S. Congress  devoted an entire resolution to apologizing to Native Hawaiians for overthrowing their kingdom in 1893. But a U.S. apology to Indigenous tribes took until 2009 and came stealthily tucked away in an unrelated spending bill.

As I mentioned previously, I'm not too familiar with Indian History. But that really surprised me-- that even those steps were taken so late in American History!

Even Black Slavery was abolished much earlier IIRC, wasn't that sometime in the mid 1800s? (Of course in many ways Blacks still weren't free-- but still...

Shameful stories of the past. We have to accept the truth of these events and make sure they are never repeated again.

I doubt if the vast majority of Americans have any idea that this went on for 100 years and if they did they don't seem to care.

And not distant pass JR, I'd say most everyone on NT was alive when much of this traspired.

I doubt if the vast majority of Americans have any idea that this went on for 100 years and if they did they don't seem to care. And not distant pass JR, I'd say most everyone on NT was alive when much of this transpired.

Well, I could be wrong, but my guess is that in this case, most Americans actually weren't aware.

Why? Probably because the cover-up was so intense-- a priority for many politicians and their co-conspirators.