Former President Donald Trump will return to the political stage, a heat wave is expected to scorch the East Coast and more news to start your weekend

After spending more than three months behind closed doors, former President Donald Trump will re-take the political stage Saturday at the North Carolina Republican Party state convention in Greenville amid Republican turmoil, an extended social media ban, and criminal investigations into his past conduct. This will be Trump's first televised speech since his Feb. 28 appearance at the Conservative Political Action Conference in Orlando, Florida. In a written statement that repeated false charges of a "fraudulent" election in 2020, Trump said Friday it is "a great honor to be speaking at the North Carolina GOP convention." This speech comes one day after Facebook announced that Trump will be suspended from the platform until at last Jan. 7, 2023.

In sign of support, Fauci, first lady to appear together at vaccination clinic

With the release of a trove of Dr. Anthony Fauci's emails this week, Republicans' attacks on the nation's top government infectious-diseases expert have gone into overdrive. On conservative news channels, Fauci — who serves as President Joe Biden's pandemic adviser — has been pilloried as a liar who misled the American people about COVID-19's origins. In Congress, Republican calls for his resignation have grown louder. Despite the right's onslaught, the White House has made clear that it is standing with Fauci. Press secretary Jen Psaki this week praised Fauci as "an undeniable asset" and Biden himself told some reporters Friday he was, indeed, "very confident in Dr. Fauci." In a sign of support, Fauci will join first lady Jill Biden for a visit at a COVID-19 vaccination clinic in New York City on Sunday afternoon, the White House announced. The two will also appear together on Kelly Ripa and Ryan Seacrest's morning talk show Monday.

A week after a cold and rainy Memorial Day weekend in much of the country, temperatures are forecasted to soar to mid-summer levels over Saturday and Sunday. Major cities on the East Coast — including Boston, New York City, Philadelphia, Baltimore and Washington, D.C. — are expected to see high temperatures in the 90s for at least three consecutive days. "This weekend will be entirely different when compared to last weekend," AccuWeather meteorologist Bernie Rayno said. "We expect temperatures to climb 30, 35 and even 40 degrees higher this Saturday and Sunday versus last Saturday and Sunday," he said.

Saturday's Belmont Stakes doesn't have the buzz of a Triple Crown on the line or drama surrounding Bob Baffert, who has been banned indefinitely by the New York Racing Association, but it is shaping up to be the most competitive race of the big three and one of the best races of the entire year. "It's a formidable group," said trainer Todd Pletcher, who has three horses in the race. "It's a good field. I think horses are coming out of the right races." Essential Quality, who was the favorite to win the Kentucky Derby only to finish fourth, is the favorite to win at Belmont. Trained by Brad Cox, Essential Quality drew the No. 2 post position in a field of eight. Preakness winner Rombauer also is part of the field, but Kentucky Derby winner Medina Spirit, who faces disqualification after a second failed drug test, will not be racing. Post time at Belmont is set for 6:49 p.m., and NBC will air the race.

The Kennedy Center Honors reconfigured to adapt to the pandemic

The Kennedy Center Honors will be bestowed to five entertainment icons during a two-hour special airing on CBS Sunday (8 p.m. ET/PT). Emmy, Grammy and Tony award winner Dick Van Dyke; legendary country artist Garth Brooks; multi-hyphenate Debbie Allen; singer/activist Joan Baez and violinist Midori, were honored late last month. The grand ceremony that usually occurs initially was postponed due to COVID-19. Then, the event was not able to take place in front of the typically large crowd at Washington, D.C.'s iconic John F. Kennedy Center for the Performing Arts. Instead, it had to be reconfigured to adapt to pandemic times and that will be reflected in the CBS special. The event will be hosted by Kennedy Center honoree Gloria Estefan and will feature a series of surprise appearances, speeches and performances.

From the editors of USA Today/content to be taken with a grain of salt.

It is already hot here, I am headed to neighbors to help get racks of ribs smoking and get the beer on ice.

Have a great weekend

A week after a cold and rainy Memorial Day weekend in much of the country, temperatures are forecasted to soar to mid-summer levels over Saturday and Sunday. Major cities on the East Coast — including Boston, New York City, Philadelphia, Baltimore and Washington, D.C. — are expected to see high temperatures in the 90s for at least three consecutive days. 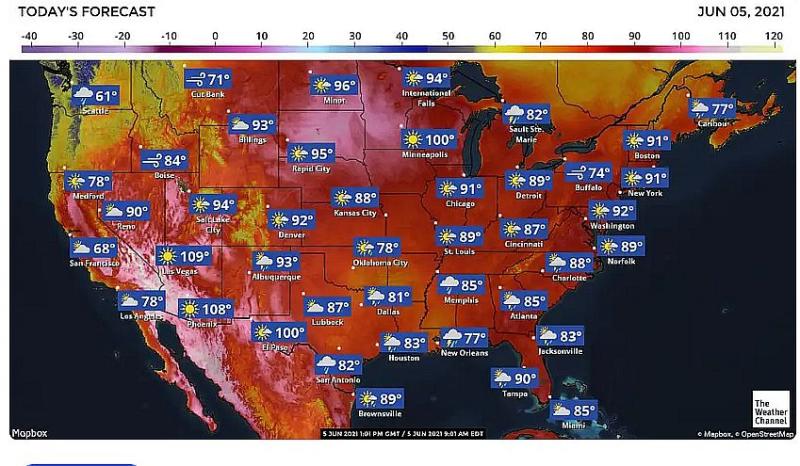 Sometimes it feels like national news doesnt think something happened until it happens on the east coast.

Minneapolis will have a 100 degree temperature, but doesnt merit a word in the USA Today story about the heat today.

Sometimes it feels like national news doesnt think something happened until it happens on the east coast.

You're right about that. International Falls MN. right on the Canadian border will be 94 and that is extremely unusual for that area.