A 51,000-year-old carved bone is one of the world's oldest works of art, researchers say

The toe bone of a prehistoric deer carved with lines by Neanderthals 51,000 years ago is one of the oldest works of art ever found, according to a study.

The toe bone of a prehistoric deer carved with lines by Neanderthals 51,000 years ago is one of the oldest works of art ever found, according to a study released Monday.

The discovery is further evidence that Neanderthals — Homo neanderthalensis — were able to express symbolism through art — which was once attributed only to our own species, Homo sapiens.

"This is clearly not a pendant or something like that," said Thomas Terberger, a professor and prehistoric archaeologist at the University of Gottingen in Germany, who co-authored a study of the object in the journal Nature Ecology & Evolution. "It's clearly a decoration with a kind of symbolic character. ... You might even call it the initial start of art, something which was not done by accident, but with a clear plan in mind."

The bone was unearthed in a cave in the Harz Mountains of central Germany, about 150 miles southwest of Berlin. The front is carved with overlapping chevrons — lines in the shape of inverted V's — that appear to point upward, and archaeologists have also discerned a line of smaller incisions on its lower edge, which seems to have served as its base.

"We were trying it out, and this object can stand alone on its base. It doesn't shake or tip over or anything," said archaeologist Dirk Leder of the Lower Saxony state office for Cultural Heritage, who led the excavations that discovered the bone. "It was probably left standing upright in a corner of the cave."

The carved bone was unearthed alongside the shoulder blade bones of deer and the intact skull of a cave bear — rare objects that may have indicated that the assemblage had ritual meaning, he said.

Micro-CT scans of the engraved bone and interpretation of the six lines in red that shape the chevron symbol. Highlighted in blue is a set of sub-parallel lines. Courtesy Lower Saxony Office for Heritage

Radiocarbon dating has established that the bone is 51,000 years old — older than any comparable works of art attributed to Neanderthals.

Archaeologists have also found ancient eagle talons used as pendants by Neanderthals, as well as cave paintings in Spain that may be older — their date is disputed. Terberger said, "In this case, for the first time, we have a reliably dated object."

The Einhornhohle — or "Unicorn Cave" — where the carved bone was unearthed has been famous since at least the 16th century; it is now a tourist attraction. It got its name from the fossilized bones found there, supposedly from unicorns, that were once ground up to make medicines.

Excavations since the 1980s have established that the cave was inhabited by successive generations of Neanderthals, from at least 130,000 years ago until about 47,000 years ago.

Later groups of Homo sapiens also inhabited the cave, but only much later, after about 12,000 years ago, Leder said. The earliest evidence for Homo sapiens in the southeast of Europe is from about 45,000 years ago, and it's not thought that they arrived in central Europe until at least 10,000 years after that, he said.

The former cave entrance where the engraved item was recovered. The item was found about 1 meter behind the person holding the staff. J. Lehmann / Courtesy Lower Saxony Office for Heritage

The archaeologists can only guess at the meanings of the carvings — if they have any meaning at all. "This is quite unique," Leder said. "We don't see it anywhere in the Paleolithic literature.

"We were discussing different interpretations. ... The shape could be like a female figurine with the head and the chest part, but then the chevron pattern to some of us looked like three mountains in a row — a landscape view," he said.

Microscopic analysis of the bone shows that the carvings are very deep, which suggests that it was boiled to soften it before carving began. The species of prehistoric deer that the bone was from was also rare in the region at the time and extremely large, which could suggest that the artwork had special importance, he said.

The discovery is more evidence that Neanderthals weren't just dumb cavemen, as scientists once believed, but that they were capable of artistic or symbolic expression — which was once thought to be unique to Homo sapiens, said Bruce Hardy, a professor of anthropology at Kenyon University in Ohio, who wasn't involved in the latest study.

It's likely that a lot of Neanderthal artistic objects were carved from wood — a much easier medium to work with than stone or bone — that has perished after many thousands of years, he said.

The increasing evidence of symbolic artistic expression by Neanderthals, as well as by later Homo sapiens, suggests that the hominin species that were the ancestors of both were also artistic, he said.

"If those two different groups also share a common ancestor, chances are that common ancestor also has some degree of symbolic ability, as well, which means it goes much further back," he said.

Hardy's own research has included the discovery of what seems to be a piece of Neanderthal string — a Stone Age technology not seen before.

Archaeologist Andrew Sorensen of Leiden University in the Netherlands said that the analysis of the marks on the bone shows that they can't have been the result of random gnawing by carnivores.

"The relatively regular angles of the intersecting lines is particularly convincing that these marks were created intentionally by Neanderthals," he wrote in an email.

The possibility that the bone had been boiled to make it easier to work with was especially interesting, he said. His own research focuses on the use of fire by Neanderthals, which is also seen as evidence of their ability to use relatively advanced technologies.

It's either a stylized torso of a female or cuts in the bone from the person eating that piece of meat made by the sharp edge of a shell or napped stone.

I can understand that there is technology that can date an object, but how can they be sure of when the carving was done?

The picture at the top of the page doesn't really do it justice. Here's a couple more I found online, and another one from the seeded article highlighting the cuts. 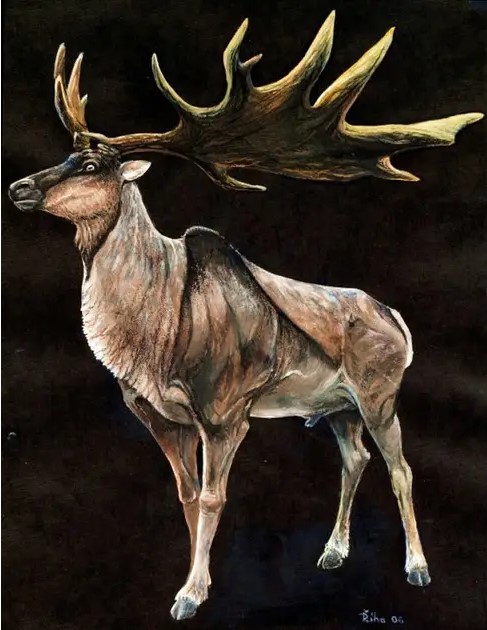 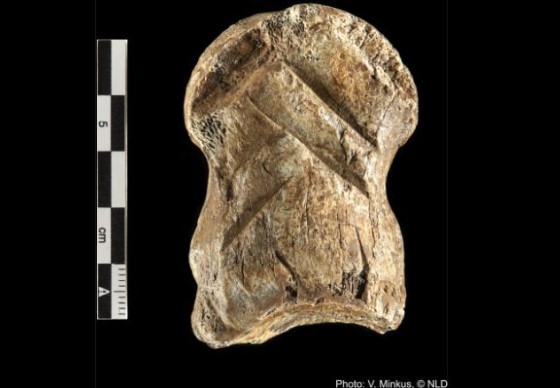 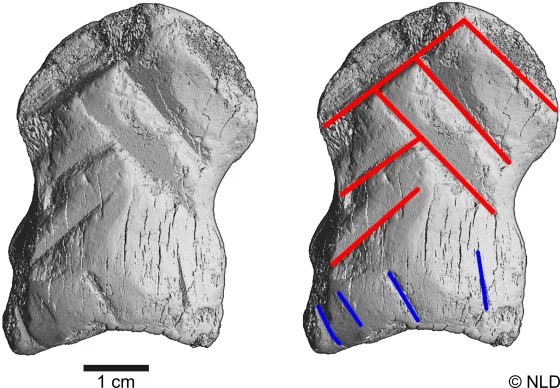 The top one is an artist's impression of the extinct species known as a "giant deer". The next one shows the vertical orientation and a measuring stick. The last one shows the cuts more clearly.

It looks like mountains with foothills in the foreground to me. Maybe a depiction of a place with religious or cultural significance. Maybe the view from a gathering place somewhere in or near the Alps where various bands of Neanderthals would meet from time to time, perhaps seasonally around a solstice or something.

Then again, maybe it's just a meaningless doodle.

I know art when I see it.  Interesting that the inscribed lines are at right angles to each other.  Right angles aren't common in nature so the art is a little more sophisticated than just depicting what was seen.