The liberal Washington Post editorial board on Thursday broke rank with the left and pondered why Democrats are so opposed to giving poor children a choice in schooling.

The liberal Washington Post editorial board on Thursday broke rank with the left and pondered why Democrats are so opposed to giving poor children a choice in schooling.

"For 17 years, a federally funded K-12 scholarship program has given thousands of poor children in D.C. the opportunity to attend private schools and the chance to go on to college. And for many of those 17 years, the program has been in the crosshairs of unions and other opponents of private school vouchers," the Post's editorial board wrote. "Their relentless efforts unfortunately may now finally succeed with House Democrats and the Biden administration quietly laying the groundwork to kill off this worthy program."

The Post reported that the House Appropriations Committee expects the Biden administration to phase out the D.C. Opportunity Scholarship Program.

"The measure is likely to pass the House, setting up a potential fight in the Senate where bipartisan support for the program has helped to stave off past efforts to abolish it, including by the Obama administration," the board wrote.

The reliably liberal editorial board pointed out that the cost of the program is "modest and well-spent" and is part of a larger deal that also directs money to both traditional public schools and public charter schools by way of scholarships to students, many of whom are black and hispanic.

"The program, contrary to what you may have heard from opponents, was not foisted on an unwilling city by congressional Republicans, but was backed by then-Mayor Anthony A. Williams (D) and has been embraced by parents who want the school choice that affluent families take for granted," the board wrote.

"It takes nothing away from public schools. Indeed, if opponents do succeed in killing off the program, likely gone will be the extra federal monies for the District's traditional and charter schools, too," the Post continued. "Funds the school system uses for teacher training also could fall victim to the teacher unions' vendetta against vouchers."

Billionaire Jeff Bezos' newspaper then declared, "It is striking how some foes of the scholarship program… see no inconsistency in their opposition to this program and their support for the $40 million DC Tuition Assistance Grant program, which provides funds for college."

The editorial board concluded the piece by noting wealthy families are also eligible for the DC TAG program.

"Where is the logic in supporting a tuition assistance program available to affluent D.C. families and not one that only benefits very low-income D.C. families? To be sure, the quality of the city's public schools has improved since the program was enacted — perhaps in part due to competition from school choice — but that doesn't mean that poor parents deserve no choice in where their children go to school," the board wrote.

This editorial came in the wake of a lot of change in education. First, because of the pandemic parents became more aware than ever before of what and how their children are, or are not, learning. Progressive politicians partnered with teachers' union bosses to keep kids locked out of their schools, despite much of the science indicating the Coronavirus poses an "extremely low" risk to school-aged children.

Perhaps that's why public support for school choice is also at an all-time high. According to a recent poll from RealClear Opinion Research, a 74-percent majority support school choice, while 16 percent oppose it and 10 percent are unsure.

More than 15 other states across the country either established new programs or expanded existing ones to meet rising parent demand for alternatives to traditional public schools.

There may still be hope for the msm.

On this one issue they got it right.  Hopefully the senate can save the program.

And for many of those 17 years, the program has been in the crosshairs of unions and other opponents of private school vouchers,

One of the most egregious and largely unchallenged lies in the public sphere is the claim that teachers unions prioritize the children. The only thing public teachers unions care about is protecting their franchise from competition. 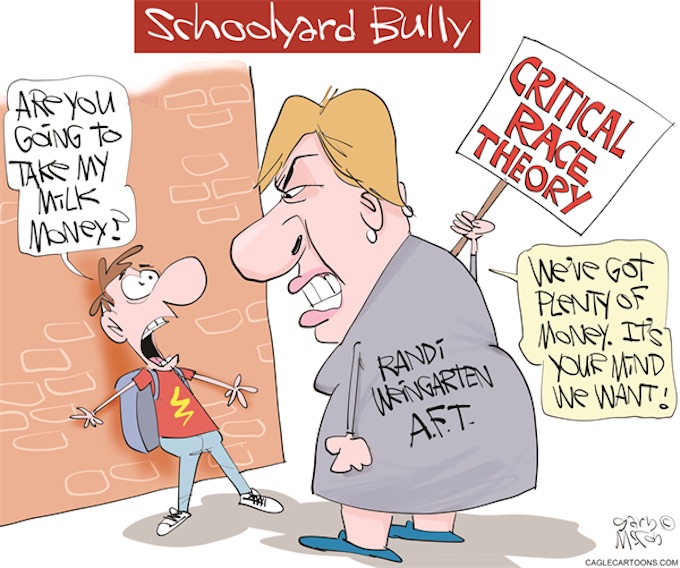 Why is Trump threatening the little boy with a Critical Race Theory sign???

When put to a vote of 6,000 NEA delegates, the motion failed.

The welfare of their students are the second to last thing the Union cares about.  Their most important goal is taking on the kids parents.