The building in north Toledo containing the work of art was struck by lighting on Wednesday. The artist says it will be replaced. 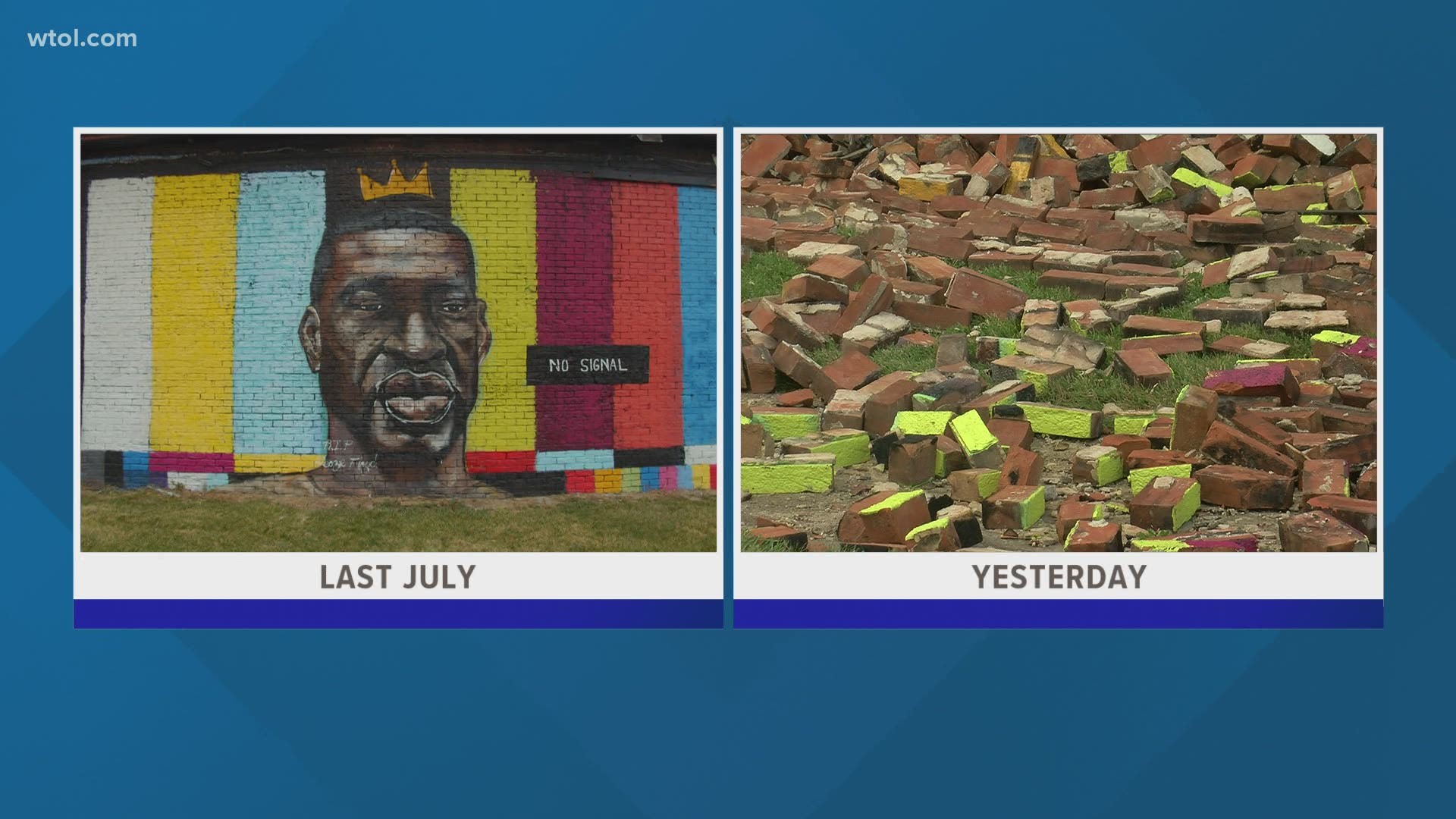 TOLEDO, Ohio — The brick exterior of a north Toledo building containing a George Floyd mural came toppling down on Tuesday after it was hit by lightning, and the son of former President Donald Trump is wondering if it may have been an act of God.

Donald Trump Jr. made several social media posts about the incident, asking if a "higher power" could be responsible.

"This will drive some people nuts but oh well," Trump Jr. wrote on Instagram. "I mean you have to wonder if someone, like a higher power, is telling us something here?!? Obviously what happened to George Floyd should never happen anywhere!!! That said, objectively speaking, given his history I'm not sure turning him into a deity and a role model for our children is exactly the right idea either. Also please don't tell me they're not trying to turn him into a role model/hero there's statues of him going up all over the country etc. etc. The same lunatics who want to erase our founding fathers want statues of this man all over the place. Again, we can learn from a disastrous situation but the pendulum seems to always correct way too far these days. Discuss!!!"

On Twitter, Trump Jr. said, "It's almost like a higher power is telling us something. When was the last time you heard of a brick building being destroyed by lightning? I am a builder and I'm not sure I've ever heard of it."

The piece was created by Toledo artist David Ross just about one year ago at the intersection of Summit and Lagrange streets. He said the artwork stands as a memorial and reminder to never forget what happened that day in May of 2020 when Floyd was murdered by former Minneapolis police officer Derek Chauvin.

A witness who saw the wall fall told Toledo Fire & Rescue they saw a lightning bolt strike the building. The department later confirmed the strike to be the cause of the collapse.

No cleanup effort was under way on Wednesday. One of the things the city is looking at is whether this building needs to be demolished entirely following the lightning strike. A spokesperson for the city said building officials have determined that an emergency demolition of the building is not necessary at this time.

The spokesperson said the building was stable and secure prior to the lightning strike, however, the facade was not.

No one will ever accuse Donald Trump Jr. of having any class.

No one will ever accuse Donald Trump Jr. of having any class.

When they make a mural with George Floyds face on it they are not telling people "be like George Floyd" , they are telling them "remember what happened to George Floyd".

Hmmmm - wonder where the mural is - for the Native Americans killed by the police that NEVER MAKE THE NEWS????

Native Americans Most Likely To Die From Police Shootings, Families Who Lost Loved Ones Weigh In

U.S. Census data from 2019 shows that Native Americans make up 0.9% of the population. Looking at the CDC’s fatal injury data on firearm deaths between 2009 and 2019 from legal intervention, meaning injuries inflicted by police, Native people were 2.2 times more likely to be killed by police than white people and 1.2 times more likely than Black people.

“Our statistics are the highest in the nation, but it goes unnoticed because people don't talk about us,” says Wunderlich.

Where's their murals???  What 'bout the gnashing of teeth, looting, burning, rioting - isn't that what happens when folks are killed by the police??  Where are the Native American murals????

Obviously what happened to George Floyd should never happen anywhere!!! That said, objectively speaking, given his history I'm not sure turning him into a deity and a role model for our children is exactly the right idea either.

That's actually a pretty reasonable, and even-handed take. It shouldn't be automatically dismissed just because Trump said it.

You can be offended by what the police did to George Floyd and still realize that maybe he was not the best poster child for fighting police brutality.

However, the rest of the stuff - i.e. implying that God is trying to tell us something - is not called for.

(Those incapable of embracing a little nuance in their analysis need not bother responding. This has been a public service message.)