A middle school teacher in Rhode Island criticized her school's adoption of critical race theory, claiming it is "creating racial hostility" among her students and colleagues. 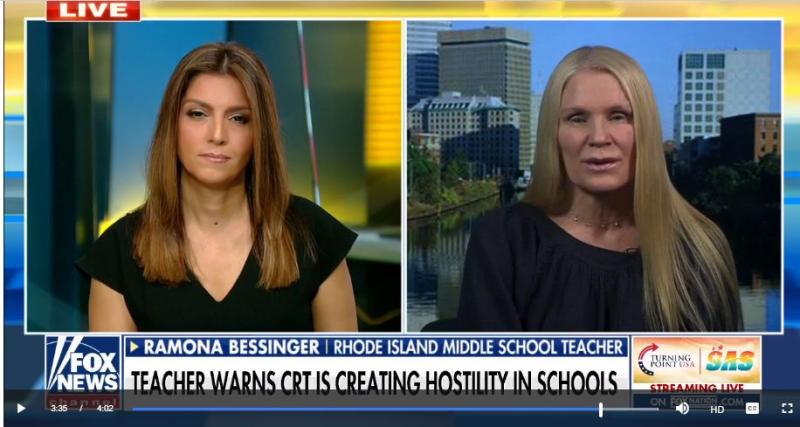 A middle school teacher in Rhode Island criticized her school's adoption of critical race theory, claiming it is "creating racial hostility" among her students and colleagues.

Ramona Bessinger, who has been a teacher for 22 years with the last seven in the Providence school district, explained in a featured post with Legal Insurrection on Tuesday that her district's new "radicalized curriculum" has "created racial tensions among students and staff where none existed before."

"During my career, I have always tried to provide the best education for my students," she said. "The past 2020-21 school year was a sad and worrisome turning point for me as an educator."

"Providence K-8 teachers were introduced to one of the most racially divisive, hateful, and in large part, historically inaccurate curriculums I have ever seen in my teaching career," she continued.

In the post, Bessinger said the "controversial critical race theory" had "infiltrated" her school system, sowing divisions with its "focus on identities."

"You won't see the words 'critical race theory' on the materials, but those are the concepts taught," she wrote. "The new, racialized curriculum and materials focus almost exclusively on an oppressor-oppressed narrative and have created racial tensions among students and staff where none existed before."

The teacher also contrasted her curriculum's normal instruction on race and slavery versus the new concepts that are missing "diversity, perspective, truth, and rigor."

Bessinger said the new program prevents teachers from discussing classical writings, controversial instances, or historical themes such as genocides or the Holocaust.

Bessinger presented screenshots to support her claims, with one showing teachers encouraged to join "white educator affinity groups" in which they are taught not to exercise white supremacist ideals in the classroom.

"This was a system-wide directive to separate white and non-white teachers for training," she wrote, including a screenshot that showed the differing groups from Dr. Barbara Mullen, the chief of equity, culture.

Another aspect of the classroom changed in the new curriculum is the requirement, or lack thereof, for students to stand and respect the Pledge of Allegiance, she said.

"Finally, for some students, standing for The Pledge of Allegiance was no longer something they did. We are not allowed to question why," she wrote. "And the truth is, I knew why."

CLICK HERE TO READ MORE FROM THE WASHINGTON EXAMINER

Bessinger is one of many, including teachers and parents, across the country who have spoken out about the adverse effects of critical race theory, as Democratic lawmakers continue to defend it or claim it does not exist. Republican lawmakers, including several governors, have heard these criticisms and have pushed legislation to ban critical race theory from being taught.

The Rhode Island state Legislature initially proposed a bill that would prohibit the teaching of "divisive concepts" such as critical race theory, but it was ultimately tabled to a committee for further consideration.

Providence's public school district did not immediately respond to the Washington Examiner's request for comment.

She has a face that looks like it was chiseled out of unused rock formations at Mt Rushmore.

Im not sure kids need a better history of racism in America than they are getting, but Im sure a lot of adults do.  The ignorance the average white adult has about the history of America is appalling.

Perhaps Bessinger's problem with 'CRT' is not so much the Critical, Race or Theory but instead the actual history of this nation, what this nation achieved and over whom those achievments were made.

On the short of it, is it possible that Bessinger is just another run of the mill MAGA?

I dont want to uh, offend anybody, but I think this teacher would be more believable if she didnt look like a WW 2 SS officer.

So CRT is causing hostility. Let's see, if we didn't teach CRT and the minority kids kept their mouths shut and were good little minorities then the snowflake kids and their teacher could keep right on teaching whitewashed history and everyone would be happy.