'Virtual reality is genuine reality' so embrace it, says US philosopher 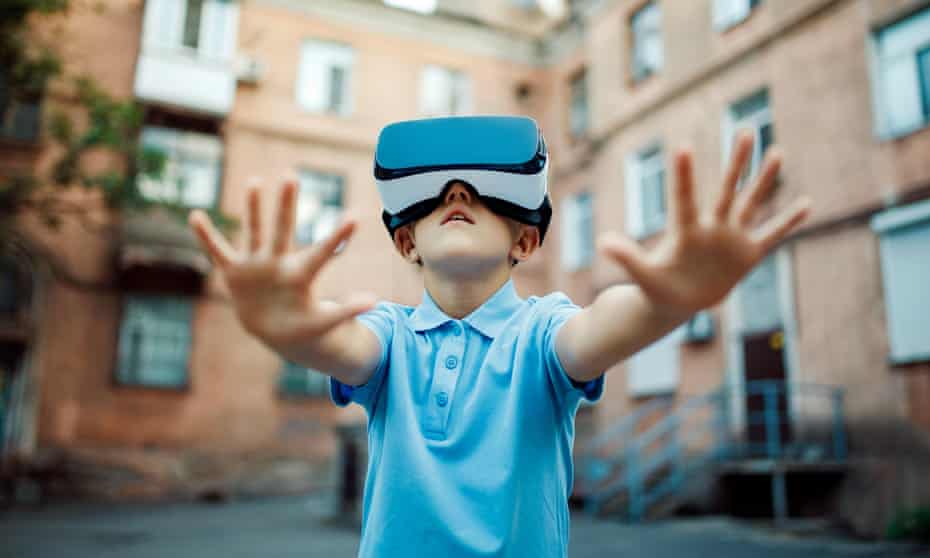 It is hard to imagine humans spending their lives in virtual reality when the experience amounts to waving your arms about in the middle of the lounge with a device the size of a house brick strapped to your face.

But this is where humanity is heading, says the philosopher David Chalmers, who argues for embracing the fate. Advances in technology will deliver virtual worlds that rival and then surpass the physical realm. And with limitless, convincing experiences on tap, the material world may lose its allure, he says.

Chalmers, a professor of philosophy and neural science at New York University, makes the case to embrace VR in his new book, Reality+. Renowned for articulating "the hard problem" of consciousness - which inspired Tom Stoppard's play of the same name - Chalmers sees technology reaching the point where virtual and physical are sensorily the same and people live good lives in VR.

"A common way of thinking about virtual realities is that they're somehow fake realities, that what you perceive in VR isn't real. I think that's wrong," he told the Guardian. "The virtual worlds we're interacting with can be as real as our ordinary physical world. Virtual reality is genuine reality."

It all started, as these things can, with the French philosopher Rene Descartes. Chalmers was pondering his question of how we can know anything about the external world. Modern philosophy often reframes this as a Matrix-style poser: how can we know we are not in a simulation? To cut to the chase, we can't, Chalmers says.

All of which leads to virtual reality. In the decades ahead, Chalmers suspects we will ditch the clunky headsets for brain-computer interfaces, or BCIs, that allow us to experience virtual worlds with our full suite of senses. With advances in computing - in the next century, perhaps - those worlds would seem as real as the physical world around us.

On the point of philosophy, Chalmers argues that even today's virtual worlds are "real". A conversation in VR is a real conversation, he says. The objects in the virtual worlds are real too, he asserts, just made of bits instead of quarks and electrons. As virtual worlds become rich and convincing we will build virtual societies, take on virtual jobs, and have motivations, desires and goals that play out in those environments. "Most of the factors that make life meaningful are going to be there in virtual worlds," he says. "There's no good reason to think that life in VR will be meaningless or valueless."

But where does this leave the physical world? "In the short term we're pretty clearly going to be based in physical reality and I certainly wouldn't recommend abandoning it," Chalmers says. "But in the longer term, it's possible to imagine people spending most of their lives inside virtual reality." The pursuit of the physical may come to seem a novelty or a fetish, he adds.

There are plenty of pitfalls to be wary of, he notes. As fulfilling as virtual worlds may become, people will need real food, drink and exercise, and perhaps even the odd glimpse of daylight, to keep their bodies from withering away. The risks may be trivial for decades yet, Chalmers says, but a gradual trend towards virtual living could eventually raise new health issues.

Writing in the book, he describes numerous draws that will pull people in to VR. These are worlds in which people can enjoy superhuman powers, possess other bodies, experience new sensations and explore environments with different laws of physics. With almost unlimited space, everyone can have a virtual mansion, or even a virtual planet. And if the physical world becomes dangerously degraded - by environmental collapse, nuclear war or an interminable pandemic - VR could offer a safe haven, he says.

But the lure of VR might cause neglect on a global scale, Chalmers concedes. Would climate change and other crises facing the physical world lose their urgency? That would be a disaster, he says: "Physical reality is really important. We've got to keep a grounding in it and treat it well."

It's Christmas in the Metaverse: welcome to your Zuckerbergian nightmare Read more

These are not the only concerns. Virtual worlds are owned by corporations that want a return on their investment. In October, Facebook rebranded as Meta, reflecting its ambition to dominate the "metaverse", the virtual world it wants people to work and play in. Frances Haugen, the Facebook whistleblower, has raised serious concerns about more intrusive surveillance and data gathering in the metaverse. There is also the risk of psychological damage, she argues: if we are better looking and have better clothes and a nicer home in the metaverse, how will we feel when we leave?

"If virtual worlds are controlled by corporations, as they seem to be right now, will that lead to potentially dystopian realities where the corporations are controlling everything in our environments? I think there are obvious reasons to worry about that," Chalmers says.

It is unlikely everyone will turn to VR, and some people, Chalmers says, will still value sheer physicality.

To me, this is insane and would constitute a dystopia.

To me, this is insane and would constitute a dystopia.

It has that potential...no doubt.

I think it's going to be fantastic and terrible, just like TV was or the internet is.

We already have virtual meetings.  Imagine making those meetings immersive, where technology re-creates the feeling of being in the same room.  Now imagine you have that ability, it's Christmas, your grandkids live in Buenos Aires, and you can actually spend virtual reality time with them.  Fantastic.

Now imagine all of the things that will totally go wrong in an unpoliced virtual world.   Terrible.

Almost all futuristic predictions involve dystopia to some extent. I dont think human beings are made to live in a completely artificial intelligence future.  Wont be around to see it one way or the other though.

I think it's going to be fantastic and terrible, just like TV was or the internet is.

It has a ways to go, but you can  already purchase haptic gloves and vests for it.  When virtual reality can encompass all 5 senses, it will have the potential to replace reality.  It could be one of the greatest inventions ever, with some of the greatest potential misuses.

Almost all futuristic predictions involve dystopia to some extent.

Yeah, I think so.

I dont think human beings are made to live in a completely artificial intelligence future.

I tend to agree, but I'm not sure I'm smart enough to imagine all the possibilities.  I would guess there will be some sort of hybrid arrangement, don't you think?

Wont be around to see it one way or the other though.

I dunno.  As rapidly as things are advancing, we might all be surprised.

It's the same way TV is/was or the internet or the telephone or any other major technological breakthrough.  Even the printing press.

Trade reality for what could be a perfect life?  A lot of people.

And I agree with you. This is a terrible idea.

Trade reality for what could be a perfect life?  A lot of people.

How do you stay fit?  Is there a virtual treadmill or something?

How do you stay fit?  Is there a virtual treadmill or something?

Virtual reality doesn't care if you are fit or not.  Just make your avatar look like Chris Hemsworth.

Virtual reality doesn't care if you are fit or not.  Just make your avatar look like Chris Hemsworth.

I get that, but my brain living in the virtual world still requires my heart to keep working in the real world.

We see this happening already with the utterly crazy response to gaming.   Modern cyber games are incredibly immersive (superbly done and fun) and extremely addictive.

I have never used the technology and never will.

Philosophically the argument has merit, but we are barely in the infancy of the technology. Smart Glass, VR headsets, VR smartphone apps, and cryptocurrencies are all pushing us in that direction. People already "live" online in their conformation bubbles within social media, it doesn't take much of leap to get adding a VR experience to Facebook or Gettr.