A new, expertly edited collection of J. R. R. Tolkien's writing on his elaborate mythology reminds us of its greatness.

When J. R. R. Tolkien (b. 1892) passed away in 1973, he left an immense amount of unpublished writings — much of which consisted of his own personal Middle-earth mythology, known as the legendarium, begun just prior to World War I. After his father's death, Tolkien's youngest son, Christopher (1924-2020), became his literary heir, publishing his father's The Silmarillion in 1977, Unfinished Tales in 1980, the twelve-volume History of Middle-earth (1983-1996), the three great tales of the First Age, as well as several books on various non-Middle-earth mythologies, such as on the Nibelungenlied, Beowulf, and King Arthur.

Amazingly, however, even with Tolkien's writings taking two adult professional lives to publish, the corpus of Tolkien's work is still not completely available to the public in book form. Just this month, a full year and a half after Christopher Tolkien's death, Houghton Mifflin has released yet another volume of Tolkien's mythological writings. Titled The Nature of Middle-earth , it is beautifully and expertly compiled and edited by one of our greatest living Tolkien scholars, Carl F. Hostetter.

This new volume confirms that Tolkien was the 20th century's greatest mythmaker, and that his mythology will — if there is justice in the world — rank someday with that of Homer, Virgil, and Dante. Just as Homer gave us profound insights into the Greek world, Virgil into the Roman world, and Dante into the medieval world, Tolkien gave us great insights into the modern world. Everything Tolkien wrote matters. Tolkien matters. National Review, especially, recognized this in the 1960s and 1970s.

Even though Christopher Tolkien has passed from this earth, he clearly — even if not legally or contractually — regarded Hostetter as his own literary heir, over the years sending him scores of his father's unpublished essays and notes.

Takings its title from nature (as in the natural world as well as in the Aristotelian sense of purpose), The Nature of Middle-earth consists of four parts: (1) Tolkien's essays on "Time and Ageing"; (2) his writings on "Body, Mind, and Spirit"; (3) his pieces on "The World, Its Land, and Its Inhabitants;" and, perhaps, best of all, (4) Hostetter's appendix to the book, on "Metaphysical and Theological Themes" in Tolkien's writings.

Part one, "Time and Ageing," reveals the great lengths to which Tolkien was willing to go for logical and mathematical consistency in his mythology. If anything, the statistics are so exacting, one gets the feeling that this is the "Dungeon Master's Guide" to the Tolkien universe. In this section, Tolkien deals with timelines galore, but he also gives us demographics — for example, the number of children a particular race in Middle-earth might have as well as the age of typical parents, rates of aging (as the title of the section indicates), vital dates in the mythology (such as when the wizards arrive), population increases, lengths of generations, etc. Some of this information has appeared in other writings, but most of it is new to the Nature of Middle-earth .

In addition, Tolkien makes numerous comments about his larger mythology and the significance of certain peoples, individuals, ideas, and events. In this first part of the book, as one example, we learn that the Elves never fell in the way that Adam and Eve fell:

The Quendi never "fell" as a race - not in the sense in which they and Men themselves believed that the Second Children had "fallen". Being "tainted" with the Marring (which affected all the "flesh of Arda" from which their hroar [body] were derived and were nourished), and having also come under the Shadow of Melkor [Satan] before their Finding and rescue, they could individually do wrong. But they never (not even the wrong-doers) rejected Eru [God the Father], nor worshipped either Melkor or Sauron as a god - neither individually or as a whole people. Their lives, therefore, came under no general curse or diminishment; and their primeval and natural life-span, as a race, by "doom" co-extensive with the remainder of the Life of Arda, remained unchanged in all their varieties.

Additionally, one learns about the first Elvish speakers, as well as why speech meant so much to them, how the Elves envisioned the movement of time and history, and how predestined the first Elvish couples were.

In this section, one discovers that the Orcs, the malevolent shock troops of Middle-earth's dark forces, were vampiric. "The last adjective 'blood-thirsty' (serkilixa) was also literal: the Orks actually drank the blood of their victims." One also learns who did and did not have facial hair (neither Aragorn nor Borormir had facial hair, and Radagast the Brown Wizard had only curly scruff), how much royal blood Denethor, the last Steward of Gondor, actually possessed, how the Valar communicated with one another and with their followers, and why Melkor became so hideous in appearance. The reader also finds out, importantly, how Manwe, king of the Valar, avoided falling as Melkor did.

Who then can say with assurance that if Melkor had been held in bond less evil would have followed? Even in his diminishment the power of Melkor is beyond our calculation. Yet some ruinous outburst of his despair is not the worst that might have befallen. The release was according to the promise of Manwe. If Manwe had broken this promise for his own purposes, even though still intending "good", he would have taken a step upon the paths of Melkor. That is a perilous step. In that hour and act he would have ceased to be the vice-gerent of the One, becoming but a king who takes advantage over a rival whom he has conquered by force. Would we then have the sorrows that indeed befell; or would we have the Elder King lose his honour, and so pass, maybe, to a world rent between two proud lords striving for the throne? Of this we may be sure, we children of small strength: any one of the Valar might have taken the paths of Melkor and become like him: one was enough (216).

Finally, one finds out what Tolkien means by "chance" and fate, especially in the carrying of the ring by Bilbo and Frodo, and why the Elves could enjoy reincarnation.

Part III, "The World, Its Land, and Its Inhabitants," takes up issues of creatures within Middle-earth, especially the eagles and the bears. But one also learns about the making of the eucharistic Lembas bread (its composition as well as its baking), tidbits about the hunting of the ring in The Lord of the Rings , Numenorean marriage customs, the Numenorean love of dancing, why the wood Elves (Legolas's people) were different from other Elves, and the prayers the remnants of the Numenoreans said.

But this is not the mere arcana of a godless fantasy. As Hostetter brilliantly notes in the fourth and most intriguing part of the book, his appendix, Tolkien, at his best and most consistent, was a serious Thomist, a devout Roman Catholic whose faith permeates all of his Middle-earth mythology:

Tolkien's claim that " The Lord of the Rings is of course a fundamentally religious and Catholic work" has puzzled many critics, because both The Lord of the Rings and Tolkien's wider legendarium are all but devoid of references to any religious cultus (let alone a Catholic system of rites and worship). And as I suggest, I think this claim puzzles many critics because they have overlooked what I believe is the most important word in the claim: sc. fundamentally. I take this word quite literally, and not merely as a throwaway rhetorical intensifier; that is, I take it that Tolkien is saying that The Lord of the Rings and, by extension, his broader legendarium (of which the LR is a deliberate part, and its lengthy coda), is at its core and foundation, or as one might say in its essential nature, based on religious, and specifically Catholic, beliefs and thought. Tolkien says as much in the third (seldom quoted) passage from Letters given above: "a tale, which is built on or out of certain 'religious' ideas" (emphasis added). (pp. 401-402)

While others — such as Joseph Pearce, Michael Jahosky, and Jonathan S. McIntosh — have made a similar argument about Tolkien, Hostetter is the first officially sanctioned Tolkien scholar by the Tolkien Estate to make such an argument in such detail and with such force. His views carry with them a great amount of gravitas.

Without question, The Nature of Middle-earth is an extraordinary work, adding yet even more purpose to Tolkien's world. It is extraordinary not only by what it tells us in such detail about Tolkien's own Middle-earth mythology and the lengths, depths, and breadth of his sheer creativity, but, thanks to Hostetter's expert editing and commentary, it also provides for us a model of Tolkien scholarship. Given his primacy of place and vast influence in modern culture — through books, movies, Dungeons & Dragons , video games, and just about every aspect of popular culture — Tolkien matters. Now, of course, Hostetter does, too.


BRADLEY J. BIRZER   holds the Russell Amos Kirk Chair in American Studies at Hillsdale College, where he is a professor of history. He is the author of   J. R. R. Tolkien’s Sanctifying Myth   (2002) and   The Inklings: Tolkien and the Men of the West 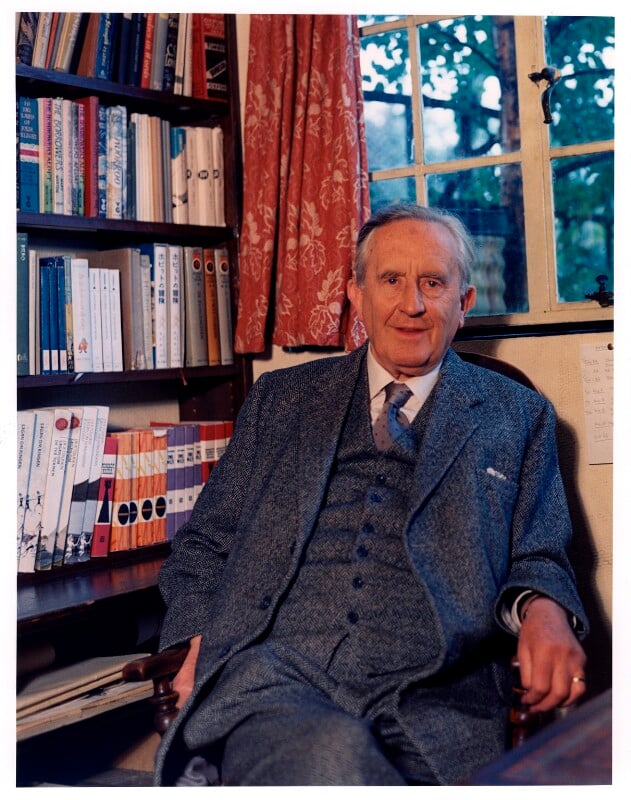 Great timing for that interesting read - just a few days ago I watched all 3 Hobbit movies.  Lord of the Rings and Stranger in a Strange Land were the "bibles" of the hippies back in Toronto during the days when I was in close concert with them (known to them as a "weekend" hippie).  Toronto's first Head Shop was called "Gandalf's House".  How often have I posted that in a way I was following the direction of Bilbo Baggins, in that my moving to China, was, as Bilbo said, "never too late for a new adventure", and an adventure it has been.

Professor Principal
2.1  seeder  Vic Eldred  replied to  Buzz of the Orient @2    2 months ago

I always believed the Hobbit was more highly regarded by teachers, than by children.

I think I'll have to see those movies too!

I was far more impressed by the writings of Mervyn Peake (born in China) than those of Tolkien but then I am an oddball in the canon of mythology writ in the 20th Cent.

I am a Jack Vance fan. He is the king of baroque language in the fantasy realm. Lyonesse was great.

Never read Peake.  By the way, Wickipedia is blocked here so I always use Bing.

My aunt read The Hobbit about halfway through to me and my brothers. I loved the story so much that I finished it on my own when she couldn't read it to us any longer. She's responsible, along with Tolkien, for my love of reading. I've probably read LoTR at least 20 times over the years and it has had a profound effect on me, especially in my younger years.

I tried to read the entire Rings  trilogy back in the day but couldnt get through it all , as this was the time when I was becoming more interested in non fiction.  Loved the language and story in Rings, but felt it became repetitive through three novels.

Love the movies, the greatest fantasy epic ever on film.

Professor Principal
5  Buzz of the Orient    2 months ago

This article and the comments that it has generated has been a joyful revelation for me, that it is still possible that NT members who are so deeply divided on some issues can unite and be completely civil on an issue and topic.