By:   By Tunku Varadarajan

Mr. McWhorter’s target audience is, precisely, the one that would regard him as racially incendiary. It includes white progressives who have “fallen under the impression that pious, unempirical virtue signaling about race is a form of moral enlightenment and political activism.”

‘This book frankly leapt out of me,” writes John McWhorter, “during the summer of 2020.” The country was convulsed not just with Covid-19, but with protests in response to the killing of an unarmed black man by a white policeman whose actions were caught on camera. Mr. McWhorter began to write in the first week of August. Eight weeks later, he’d finished “Woke Racism,” a book that hits back at the “antiracists” who prowl public life in search of transgression, and whose mission to rid America of “racist” thought he likens to that of a religious cult. His book is a cry from the heart, and readers should gauge the depth of his indignation from the fact that its working title was “F*** ’Em.”

This eloquent manifesto is Mr. McWhorter’s 22nd book, a majority of those on the subject of linguistics. His is a split personality: A linguist in his day job as a professor at Columbia University (specializing in creoles, particularly the Saramaccan language in Suriname), he’s also an outspoken commentator on race whenever the national mood requires it. As Mr. McWhorter’s thinking on race is in conflict with that of the black American political mainstream, he’s often miscast as a black conservative by glib taxonomists. But he’s careful to point out that he wasn’t “thinking of right-wing America as my audience,” even as he acknowledges that many liberal readers will think him “traitorous” for writing this book.

Mr. McWhorter’s target audience is, precisely, the one that would regard him as racially incendiary. It includes white progressives who have “fallen under the impression that pious, unempirical virtue signaling about race is a form of moral enlightenment and political activism.” Equally, it comprises black people who have succumbed to the “misimpression” that the way to their own salvation lies in “a curated persona as eternally victimized souls.”

Mr. McWhorter’s targets in “Woke Racism” are antiracist crusaders whom he calls the Elect—borrowing a term used by the essayist Joseph Bottum in his book “An Anxious Age” (2014). Mr. McWhorter chooses not to call these people Social Justice Warriors or Inquisitors, deeming those labels “unsuitably dismissive” and “mean,” respectively. He’s not the first to trace the “rootstock” of their ideology to critical race theory. This is a once-fringe belief, now muscling its way into mainstream thought, that every individual’s fate is determined by racial “hierarchy” and power. The theory contends, writes Mr. McWhorter, that a nonwhite in America is “akin to the captive oarsman slave straining belowdecks in chains.”

The Elect, Mr. McWhorter notes, pursue a proselytizing brand of antiracism that has had a particularly harmful effect on academic inquiry, “sometimes strangling it like kudzu.” Bestselling books like Robin DiAngelo’s “White Fragility”—which flagellates white people for their incurable racism—and Ibram X. Kendi’s “How to Be an Antiracist” are the gospels of the antiracist left.

The Elect have a weapon in their arsenal that lends them outsize power. As a result of the “genuine and invaluable change” that has occurred in the modern white American since the Civil Rights movement, “being called a racist is all but equivalent to being called a pedophile.” Those who police our minds for racism believe that Americans who don’t fight to overturn “the systemic pervasiveness of white supremacy” must be regarded as racist themselves. The world of the Elect is “Manichaean,” its fervor “absolutist.”

How can academics, journalists, CEOs and others combat this new culture of race-based anathema? Mr. McWhorter’s answer is refreshingly non-theoretical. Do not debate the Elect, he counsels, for “they seek not conversation but conversion.” Asking them to heed the post-Enlightenment commitment to free speech is a waste of time. We must “work around” them.

Invoking Alexander Solzhenitsyn—who wrote of the everyday courage needed to resist Soviet oppression—Mr. McWhorter says that America needs “civil valor” to combat the Elect. A critical mass of people must steel itself and start confronting the tormentors. He points to examples where people or corporations have pushed back against woke pressure: Trader Joe’s, the supermarket chain, declined to change its ethnic-oriented branding of certain products after facing accusations of racism (and offering, at first, an apology); hundreds of professors gave their support to Abigail Thompson, a math professor at the University of California, Davis, who refused to comply with “diversity” requirements imposed on her by administrators.

These examples—and others he’s compiled in his book—show us, says Mr. McWhorter, that the Elect can be put in their place if Americans behave like Galileo did before the Inquisition.

Antiracist activists have learned, he says, that they can get what they wish for if they use loudly condemnatory language. After all, no one wants to be shamed as racist on social media—the 21st-century equivalent of being burned at the stake. Mr. McWhorter equips us with some “sample scripts” that might be used in response to antiracist bullies by their beleaguered quarry. An example: “I will not sign this petition, and I don’t care what you call me when I don’t.” Another: “No, we will not refocus our entire curriculum around antiracism. We do not think of battling racism as the most important goal of our program.” Having risen in rebellion, the brave must stand their ground. “Be Spartacus,” Mr. McWhorter says.

This is a tonic to hear, of course. Yet to some weary Americans, resigned to seeing wokeness end jobs and wreck reputations, Mr. McWhorter may sound naive or overoptimistic. (Didn’t Spartacus die in battle?) At present, people at the commanding heights of our culture are all too eager to cave, no matter how loudly an individual accused of racism asserts his innocence. That said, it would be bracing if—as a start—people stopped apologizing when hounded by the Elect.

The book finishes with a robust marine metaphor. Mr. McWhorter suggests that the woke be dealt with the way some swimmers deal with sharks. “You can make a shark approaching you go away by bopping it on the nose,” he writes. The Elect are like sharks. They need to be bopped on the nose.

A faultlessly polite man, he stresses that he doesn’t mean anything physical.

Mr. Varadarajan, a Journal contributor, is a fellow at the American Enterprise Institute and at New York University Law School’s Classical Liberal Institute.

Two important books in week's time.  This one speaks for itself.

Woke Racism: How a New Religion Has Betrayed Black America 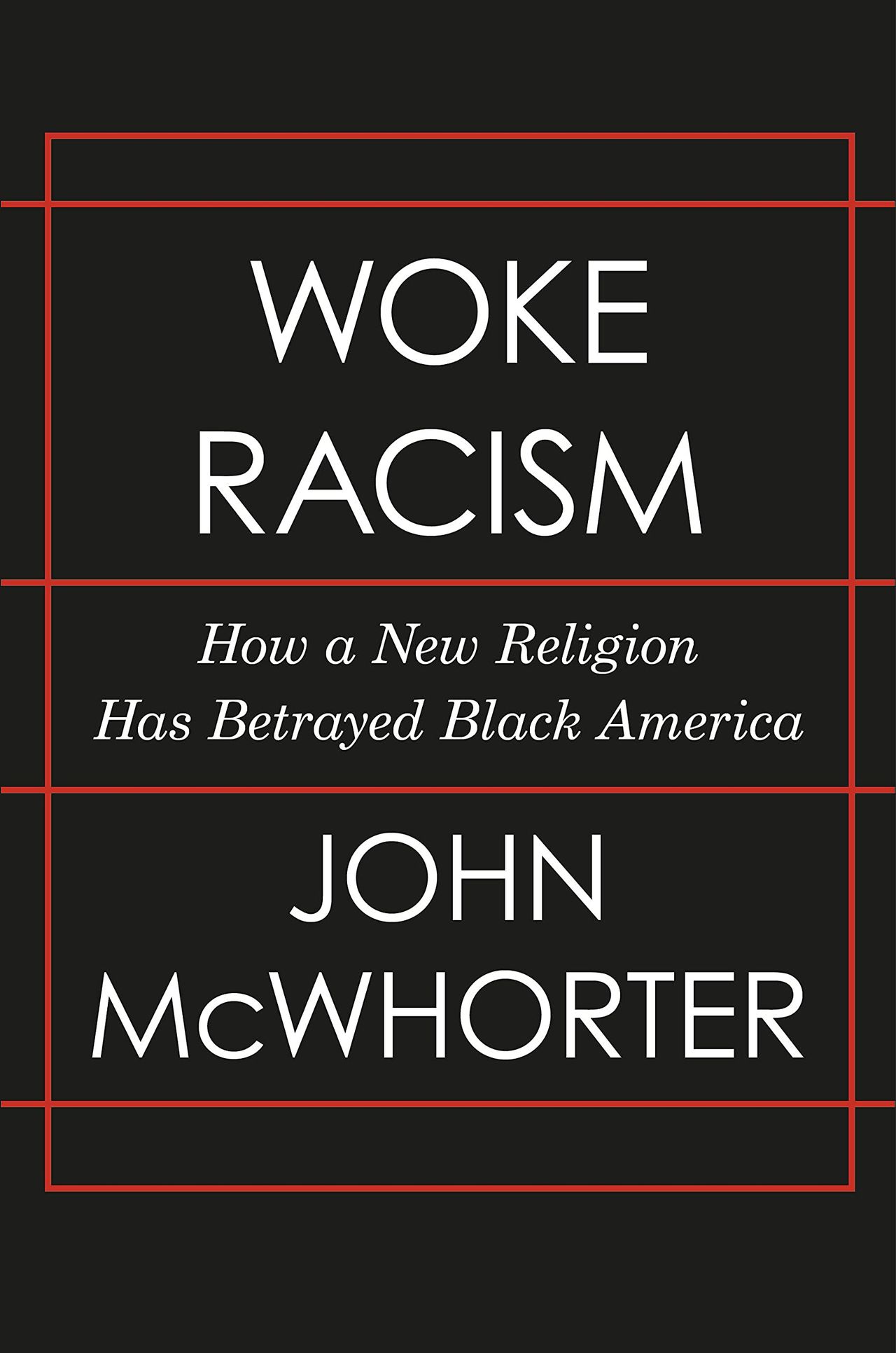 A great read!  Thanks for sharing it here.

I keep sending for these books. It's a good thing I'm not working for a living!

This article reads like psychobabble. I hope McWhorter's book isnt this bad.

As George Custer once said Tomorrow the 7th may ride into hell or to glory, it depends upon one's point of view.

To me the book looks like a confirmation of everything I've been saying right here on NT!

McWhorter is always interesting. He  is particularly perceptive on how woke racism has become the new religion on the left, with all the problems religious zealotry entails.

He  is particularly perceptive on how woke racism has become the new religion on the left,