The 2019 Economic Report of the President is out, and everyone is having fun with the bit at the end that acknowledges the help of student interns – a list that includes Peter Parker, Aunt May, Bruce Wayne, and Jabba the Hutt:

The White House is passing this off as a deliberate joke. More likely, someone slipped superheroes in to see whether anyone in charge was actually paying attention, and proved that they weren’t.

But the bigger news from the report involves the supposed economic payoffs from the Trump tax cut. Even the White House now acknowledges that the tax cut won’t do all they said it would – their wildly optimistic economic projections depend on the claimed payoff to other economic policies that they themselves haven’t specified . So tax cuts will do wonders for growth, as long as you do a bunch of other stuff, details to come later.

This puts me in mind of what Voltaire said about witchcraft: “It is unquestionable that certain words and ceremonies will effectually destroy a flock of sheep, if administered with a sufficient portion of arsenic.”

But beyond that, even the claimed positive effects of the tax cut itself are things we can already see aren’t happening.

So this report is double voodoo, or voodoo squared: it relies on voodoo economics to make big claims for tax cuts, then adds a whole additional layer of magic to get the growth projections the administration wants to hear.

Here’s the chart everyone is talking about. It shows a baseline representing what growth would supposedly be under pre-Trump policies, then a higher line showing the claimed effect of the tax cut, then still higher lines representing the effects of things like the Trump infrastructure plan: 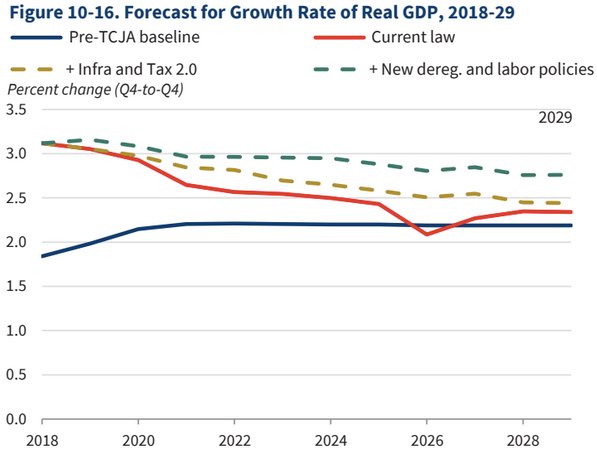 Killing sheep with arsenic     Economic Report of the President

The first thing to say, then, is that there is no Trump infrastructure plan . He’s well past the midpoint of his term, and there has been not a hint of an actual proposal. In fact, his latest budget significantly cuts infrastructure spending. So his economists are claiming credit for something he hasn’t enacted, hasn’t proposed, and for that matter hasn’t made the slightest gesture toward making happen.

Actually, my Voltaire quote is unfair. Trump wants to pretend that he can kill sheep with magic while actually using arsenic, but without actually administering any arsenic, or even asking where he might get some.

But wait, there’s more. That red line supposedly representing the effects of the TCJA shows substantially elevated growth for the next few years, even without the arsenic. But that’s not what independent economists are seeing. For example, the New York Fed’s “ nowcast ” – early estimates based on partial data – shows only 1.5% growth for the first half of this year. And the NY Fed is relatively optimistic; other nowcasters like the Atlanta Fed and Goldman Sachs are showing much lower growth in the first quarter, less than half a percent.

The White House explains why it’s predicting such big growth: the TCJA will cause a surge in business investment by “substantially raising the target capital stock and attracting increased net capital inflows.” And this rise in the capital stock will cause a surge in productivity. Except that there’s no sign of a surge in business investment: the report cherry-picks a few numbers, but overall orders for capital goods, probably the best real-time indicator, are showing nothing much (that 2015-6 slump, by the way, was about fracking, which fell off for a while when world oil prices plunged): 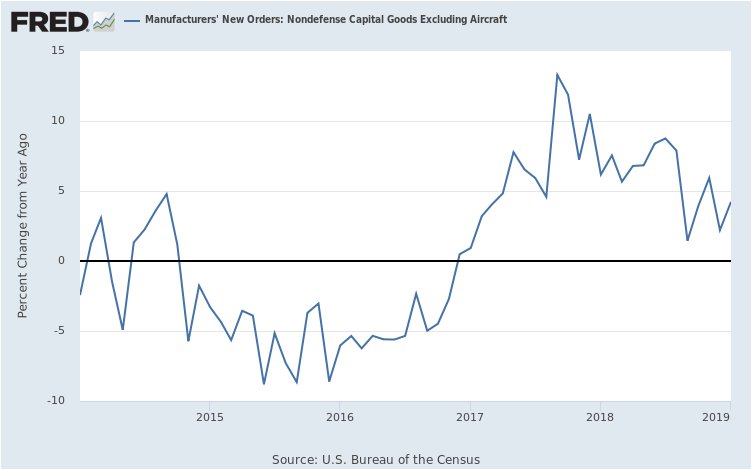 Nor has there been a huge increase in capital inflows – if there had been, we would, as a matter of sheer accounting, be seeing a huge rise in the trade deficit, not the modest increase we’ve actually witnessed.

In other words, the tax cut is a big fizzle – and even the White House is half-admitting as much.

Which then raises the question, why do people on the right keep insisting that cutting taxes on rich people and corporations will have magical positive effects on the economy? There have been no, repeat no, clear success stories for this doctrine – no, not even Reagan, who benefited from a severe Fed-generated recession early on his watch, followed by a Fed-generated recovery.

Yet the tax-cut zombie shambles on. Somehow, despite decades of practical failure, there’s a phalanx of billionaire-funded think tanks promoting trickle-down economics, and a loyal army of right-wing politicians supported by wealthy donors who keep insisting that they have faith that the next tax cut will do everything it promises. Really.

Why is that? Somehow, I suspect we know the answer.

Initial image by Jackie Molloy for The New York Times

Do you remember the Good Old Days with Paul Ryan? He was a pure scam artist, whose budgets were full of magic asterisks... but as least he didn't have Jabba the Hutt as a co-author...

Here we have part of the Trump Administration clearly saying that all the good previously said about the benefits of the Great 2018 Tax Cut for the Rich was... so much hooey. Gosh. Ya mean Trump lied to us? Who coulda imagined???

And we have... "projections"... where we learn that some people did in fact pay attention to Paul Ryan! These projections are based entirely on magic asterisks!