The Poway synagogue shooting is far from the first time California’s Jewish communities faced threats, as rightwing groups date as far back as the 1920s 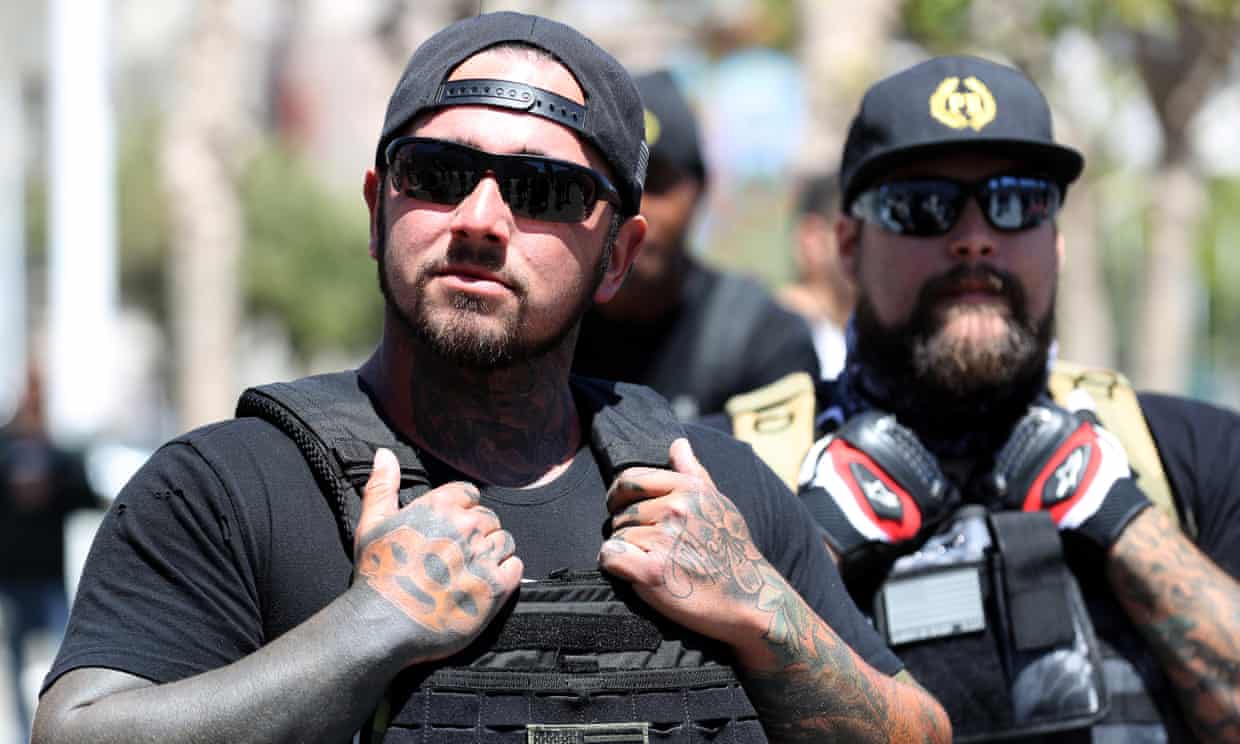 The murderous attack on the Poway synagogue in San Diego last weekend may have shattered some people’s image of southern California as a sunny, liberal enclave. But the region has for decades been an incubator of far-right politics, and it’s far from the first time its Jewish communities have faced violent threats.

“Hate groups and hate activity run pretty deep in southern California, and have for a very long time,” said Heidi Beirich of the Southern Poverty Law Center. “This activity is deeply rooted in Orange county and northern San Diego,” she added.

In the 1920s, far-right groups had a strong presence in San Diego and Los Angeles. The KKK committed several acts of violence in the region in those years. A Klan member was elected to the Los Angeles city council in 1923. In San Diego, violence, harassment and organized discrimination against Mexican immigrants, alongside Jews and Catholics, was a major focus of the Klan in the 1920s and 1930s.

Beirich puts the rise of the far right in the region down to two major factors. The strength and vibrancy of immigrant culture has often drawn a racist reaction from white people on the far right, she said. That is reflected today in the anti-immigrant groups that still operate in the region – such as the Californians for Population Stabilization group in Santa Barbara and anti-Muslim groups such as Jihad Watch in Sherman Oaks and the David Horowitz Freedom Foundation in Los Angeles.

Beirich also attributes a significant role to organizing by the John Birch Society (JBS) in the 60s, 70s and 80s. The conspiracy-minded anticommunist group was, for many, “a gateway drug into other forms of extremism”, she noted.

By the 1960s, Orange county had become a popular recruiting ground for the JBS, whose founder, Robert Welch, infamously identified former president Dwight Eisenhower as an agent of Communist Russia, and was eventually excluded from mainstream conservative circles. Some of the most prominent far-right organizers in the 80s and 90s, including Tom Metzger, the founder of the White Aryan Resistance, had been JBS members or had contact with the group, Beirich noted.

Metzger, a former San Diego television repairman, became one of the most notorious extremist leaders of the 1980s and 1990s. In 1980, he and his followers sparked a riot when they entered a park in Oceanside intending to clear it of immigrants. In 1990, men linked to Metzger’s White Aryan Resistance group were sued for killing Mulugeta Seraw, and Ethiopian immigrant. The jury awarded $12.5mn in damages to the family of the victim.

From the 1960s onwards, “Orange countians swelled the ranks of the John Birch Society, opened numerous rightwing bookstores and worked within their churches, schools and communities to roll back liberal gains that, in their eyes, threatened the nation”, according to Lisa McGirr’s classic account of the birth of the New Right in southern California, Suburban Warriors.

The JBS not only promoted the kind of conspiratorial mindset that characterizes the far right – they were, from the beginning, actively infiltrated by racists and antisemites. “As fast as Welch and a handful of conscientious chapter leaders kicked out the bigots filling their ranks, more joined up – promoting their poison behind Welch’s back, and often right under his nose,” Dan Kelly wrote in the Baffler.

In recent decades, antisemitic violence has terrorized some of southern California’s local Jewish communities. In 1999, five people were wounded when a white supremacist fired 70 rounds from a semi-automatic weapon from the lobby of the Los Angeles Jewish community in 1999. Four years later, a molotov cocktail tore through the stained glass windows of the Valley Beth Shalom synagogue in Encino, a Los Angeles neighborhood. Last year, a man yelled antisemitic slurs before attempting to run down worshippers outside a synagogue in nearby Hancock Park, and last Halloween, a synagogue in Irvine was defaced with antisemitic graffiti.

Today, the region is home to prolific and influential white nationalist “intellectuals” such as Kevin McDonald, the editor of the Occidental Observer. During his career as a professor at CSU Long Beach, McDonald published a trilogy of antisemitic books that allege Jewish dominance of finance and the media as a group evolutionary strategy.

For decades, McDonald was dismissed by many as an isolated crank. But with the rise of the “alt right”, he has appeared on podcasts and conference stages alongside the movement’s younger influencers. His blend of racial pseudoscience and far-right activism was not enough to deter the Donald Trump Jr from retweeting him in the lead-up to the 2016 election.

The Trump era has coincided with violent attacks and political campaigning from a new crop of far-right groups in the area. In 2018 a member of Atomwaffen Division, a militant neo-Nazi group, murdered his 19-year-old Jewish classmate, Blaze Bernstein, in Orange county. According to ProPublica, the killer, Samuel Woodward, may have joined Atomwaffen Division as early as 2016, and was a key organizer of its California cell.

Several California-based groups were present for the now infamous Unite the Right rally in Charlottesville, Virginia, which resulted in the death of Heather Heyer. Among those prosecuted for their role in the violence were members of the Rise Above Movement (Ram). According to the Anti-Defamation League (ADL), Ram’s members are concentrated in Orange county and San Diego. The group is known for its violence, training members in hand-to-hand combat and, prior to Charlottesville, participating in violent rightwing rallies at California cities such as Berkeley and Huntington Beach.

Ram has participated in a range of events organized by Identity Evropa (IE). The militant group is active nationwide, but its chapters in southern California have been extremely busy, flyering college campuses with propaganda attacking immigration and promoting what they call “white identity”. Members of IE played a key role in organizing the Charlottesville rally, and originated the event’s most prominent slogan, “you will not replace us”.

Meanwhile rightwing, pro-Trump rallies in southern California have also turned violent. A KKK rally in Anaheim in February 2016 saw counterprotesters stabbed and beaten, while March 2017, Orange county saw Trump supporters and counterprotesters exchange blows and pepper spray. This latter incident was part of a wave of violent street protests up and down the west coast in early 2017 – taking in Berkeley and Portland – which allowed groups such as the Proud Boys and Patriot Prayer to coalesce, build and organize.

With far-right politics so embedded in the state’s history and hate groups still active, southern California’s struggle with far-right extremism is not yet over.

But following the attack in Poway last week, the synagogue’s rabbi remained defiant. “We are fortunate to live here in a country that allows us to live as proud Jews. We are still recovering from the Holocaust, we are being mown down like animals, just like in Nazi Germany, but terror will not win. I am here in the face of senseless hate,” he said.

There is a deep seated belief by some people that they are special and their history and culture is under attack from an idea of multiculturalism. Except if you take an honest look at history the US has always been multicultural - even if it's never been truly celebrated.

And California has many minorities, including Muslims, settling there. Can't blame the acts of a few on all whites.