Name of Thrones: Parents are naming their kids after favorite 'GoT' characters

For the 319 baby girls born and named Lyanna last year, “Game of Thrones” will never end.

More parents are bestowing “Game of Thrones” character names on their children than ever, according to Social Security Administration data published Friday. Excluding the Jons and Jaimes, more than 4,500 children were given such names in 2018, up from the 3,800-plus in 2017 and the more than 3,200 in 2016. 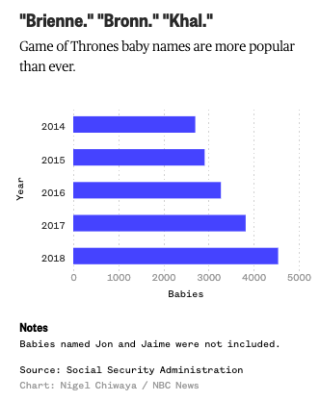 
The Social Security Administration publishes data on all names given to five or more babies in a year, which means we can’t be certain there isn’t a baby Hodor (or a little Joffrey, or a Reek), out there.

The 560 baby girls born last year named Khaleesi might want to be thankful they were not one of the 19 named Caleesi, or the five named Khaleesie (“yes, Khaleesi but with an ‘e’ at the end”).

Better a Khaleesi than a Cersei? There were 11 girls named Cersei in 2017, the only year Cersei registered in the baby name charts since 1880.

On the other hand, parents have been naming their children Tyrion since 1997, one year after George R.R. Martin published the first book in the series, “A Game of Thrones.”

This is the number of children born in 2018 who have “Game of Thrones” character names.

See more   NBC News data graphics projects , including   our article about how the sounds behind 'Game of Thrones' are made .