Cartels ‘kicking our butts’ in New Mexico, as state left without checkpoints

What happens when our government takes down its interior checkpoints north of the border in New Mexico? Well, the cartels, with the drug and human smuggling, are “kicking our butts,” according to one local official.

In an interview with CR, Couy Griffin, the chairman of the Otero County, New Mexico, county commission, explained how our government has exposed his county, and by extension, the rest of the nation, to unprecedented criminal activity from the Mexican cartels. In his view, by taking down the two secondary Border Patrol checkpoints in his county in order to focus on more processing of illegal immigrants, the federal government is missing the point.

“The cartel is winning and winning big; they are kicking our butts,” complained the commissioner of this sparsely populated but large county bordering Texas, near El Paso. “We get so tied up and focused on the asylum seekers or the illegal immigrant aspect of what’s going on at our southern border, but the reality of it is that it’s nothing but a mere smoke screen for the cartel. They’re using these large groups of migrants as nothing more than a smoke screen to smuggle their drugs across the southern border. Meanwhile, as soon as those agents are exhausted, those critical spots, they’re sending boatloads of drugs across the border in unsecured areas. The shutting down of the checkpoints on the major drug smuggling corridors is a recipe for disaster. Now they have a green light to shuttle drugs through our counties and through our rural areas, with no security in place.”

Otero County, while itself not on the international border, has two highways originating from the two main border towns where the illegal immigrants are coming in and the cartels are operating – U.S. Highway 70 and U.S. Highway 54. For years, there has been a checkpoint on each highway on the way to Alamogordo, the foremost town in this county. Griffin noted that while the cartels used to relegate their activity to remote parts of the southeast corner of the county, “Now, with our checkpoints being shut down, there’s no need to take it out to the middle of nowhere when they can just run it right up to main road.”

Otero County Sheriff David Black told me that his tiny three-man narcotics team and other deputies now have to deal with the cartels all on their own without any help from Border Patrol: “We have rerouted all of our overtime money to interdictions on the highway.” Black noted that his informants tell him the large stash houses in El Paso and even in source cities in Mexico like Juarez are now empty because the cartels “are taking advantage of the unprecedented open borders because nothing is stopping them.”

Obviously, his three-man narcotics team catches only a small amount of the drugs, but what they’ve seen demonstrates the relationship between the surge in the border migration distracting agents, the taking down of checkpoints, and the increased drug traffic.

In total, there are six checkpoints in the El Paso Border Patrol sector: one in El Paso County, Texas, two in Otero County, N.M., and three in Doña Ana County, N.M. Customs and Border Protection has confirmed with CR that all six remain shut down. Thus, there is not a single checkpoint operating in New Mexico. While the politics of Doña Ana County and the central state government in the urban areas of Albuquerque and Santa Fe have rolled out the welcome mat to illegal immigration and cartel activity, officials in the more conservative and rural counties, such as Otero and its neighboring county to the north, Lincoln, resent the secondary effects and fear that more is coming.

“I’ve never seen all these checkpoints closed in my life, and I’ve been in Lincoln and Otero Counties for 30 years,” said Lincoln County Sheriff Robert Shepperd in an interview with CR. “I have friends who are out on ranches who now have to lock their doors and do things they shouldn’t have to do. It’s eerie watching these checkpoints look like ghost towns.”

Sheriff Black in Otero believes that in the greater El Paso area, the cartel operatives are picking up those who sneak in while Border Patrol is tied down. “I guarantee you they are picking them up in truckloads and driving them north with nothing stopping them in our county.” Black feels a responsibility not only for his county but as a gatekeeper for the entire country. But he has only the resources of a 65,000-person county to deal with the largest transnational criminal organizations at a volatile international border.

The El Paso-Juarez region is a hotbed for transnational cartel and gang activity. Kyle Williamson, the special agent in charge (SAC) for the DEA’s operations in the El Paso sector, explained to me in an interview last week that three major cartels are operating in the region: Sinaloa, Cartel Jalisco Nueva Generación (CJNG), and La Linea (Juarez Cartel). They are all served by three major transnational gangs operating in the Juarez-El Paso region, including the violent Barrio Aztecas, which were just elevated to a Tier 1 threat by Texas DPS’ gang threat assessment. According to Williamson, Sinaloa is still the dominant cartel in the region, but Cartel Jalisco New Generacion is “coming on strong and pushing a lot of meth.”

Williamson echoed the concerns of the local officials about the lack of checkpoints – with a federal perspective of particular concern to the DEA. “When they catch drugs at the checkpoints, unlike at the points of entry, we as DEA actually respond to those. At the points of entry, it’s Homeland Security Investigations that responds. Border Patrol catches a lot of drugs at those checkpoints, then we go out there and take the prisoners and drugs, continue to develop the investigation and get them into court.”

Thus, when the Border Patrol is diverted in order to process the influx of illegal aliens, it hampers the DEA’s core mission. “These checkpoints are a very effective and important second line of defense, absolutely vital and necessary.”

And while most of the politicians and the media are focused on opioids, Williamson believes there needs to be more attention paid to meth. “My biggest threat in New Mexico and West Texas is methamphetamine without a doubt. When you talk about Mexican cartels, the transnational criminal groups, and drugs, you can’t do so in the same breath as the opioid crisis.”

On top of the diverted federal resources, the more conservative rural counties in New Mexico must deal with the open-border policies of the governor, who doesn’t seem concerned about the empowerment of the cartels or the drugs coming into her state. Earlier this year, Governor Michelle Grisham scoffed at the notion that there even was an emergency and initially rebuffed requests for help from Hidalgo County when it was slammed with thousands of migrants. She even removed the National Guard troops from the border, who could have been used to free up more border agents, so they could return to the checkpoints.

Three weeks ago, Couy Griffin and his fellow commission members declared an emergency in Otero County because of the closure of the checkpoints. “If Governor Grisham really had a heart for the people, she would redeploy the National Guard to our border, which would relieve those agents from the border to come back to our checkpoints, but she won’t do that,” said Griffin in our interview.

Meanwhile, as American leaders fight over politics, cartel leaders fight over turf, drugs, and human smuggling routes made possible by these policies. Those with years of experience in law enforcement seem certain that things will only get worse from here. “About six months down the road is when we are going to start seeing a spike in property crimes and a spike in overdoses,” predicted Sheriff Black ominously. “We have not seen the worst of it yet; it’s still coming.”

Sheriff Shepperd sees the same picture just one county north. “It’s like the calm before the storm.”

On top of the diverted federal resources, the more conservative rural counties in New Mexico must deal with the open-border policies of the governor, who doesn’t seem concerned about the empowerment of the cartels or the drugs coming into her state. Earlier this year, Governor Michelle Grisham scoffed at the notion that there even was an emergency and initially rebuffed requests for help from Hidalgo County when it was slammed with thousands of migrants. She even removed the National Guard troops from the border, who could have been used to free up more border agents, so they could return to the checkpoints.

The great "Gov" of the state hasn't even left her office in Albuquerque to visit and see the Southern border since she has been in office.  Her words?  We don't have a problem.

As the federal government is to blame it is The Trump Administration that did this.

when resources are overwhelmed with work and they cannot hire additional workers, what are they supposed to do?  And it's congress that creates budgets , not the executive branch. We have more people coming to the border that must be processed and dealt with.  But hey, never forgo a chance to blame your favorite target.

Trump is NOT the issue - CONGRESS is - both parties - and it has to stop.

As the federal government is to blame it is The Trump Administration that did this.

Not quite.   It is this administration, that of President Trump, that is trying desperately to stop the insanity that all other administrations, Republican as well as Democrat, before him permitted and in some cases encouraged.

Of course he also has the insanity of some in the judiciary that claim that EO's of previous administrations and 'rules' of previous department heads can't be repealed or modified by the EO's of the current President.

The democrats are refusing to provide funding for any kind of border security.

Who would know better - Congress or the people actually on the lines??? 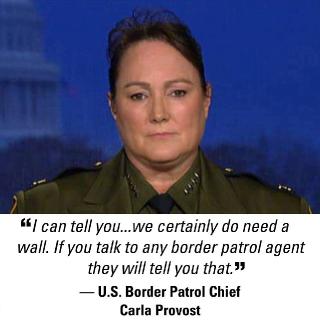