I fell in love with a boy or....how to teach an old dog and a new dog the same tricks.

community » Discussions » Category » Other » Discussion » I fell in love with a boy or....how to teach an old dog and a new dog the same tricks.

One finds their truevalue when money won't fix the problem.

As I sit here with my brain saying "tell them...." I really don't know where to start. Besides my insecurity of being able to capture the depth of my emotion.

A few years ago I owned a small diner with great coffee and fresh doughnuts as it's icon. Closing at 2:30 I would be home around the same time as the neighborhood kids from school.

When you're a kid and the guy down the street makes doughnuts.....

Eventually it went from "Doughnut man" to "Poppa Joe" which understandably drew a keen eye from parents about the childless couple down the street and his popularity among the children. Now even the parents call me Poppa Joe.

One particular family caught my attention, as I have come to know them as they have me, I learn that I could throw money an solve the immediate issues but the evolution wouldn't happen.

The father figure is a good man, married his high school sweetheart, worked and had kids all but one fully grown. Then he broke his back...he, like generations before him, lived in the ghetto or the 'hood. With the settlement he moved his family out to stop the cycle. Going to prison is a rite of passage in his and many other families.

His efforts are none short of heroic to me but I started seeing cracks where the ability to deal with owning a home is daunting and not what he's conditioned for. Sometimes survival mode is still present. Eating habits and planning are fleeting ideas given to eating what's fast and cheap.

In the meantime of working on his family a niece shows up with Danny. Uninvolved father and she's a junkie soon to be going to prison. She signed over parental rights....sure enough, went to prison.

Then came Oscar. An infant of another distant family with mother and father in prison, his for the 3rd time. I met Oscar at 5 and he was raised with Danny in that house as brothers.

Knowing the physical limitations of Dad, and me being a very active person, I would load the kids up and do parks, fishing, whatever.

This had gone on for a couple years. I'm attached to Danny but really, to him I'm a soda, a cookie, birthday and Christmas...I get that and pretty much know he's probably followed by the traditions.

So, two years ago Oscar's sperm donor get's out of Federal prison and announces his intention to take Oscar with him to Tampa. I went nuts!

He promised Oscar the moon. Bicycles, Busch Gardens, the beaches...

I pulled my attorney out and challenged him taking Oscar I lost flat out.

At the conclusion of the hearing I lost it and told DCF they were sending him to Hell and I will hold then responsible. I told the father he won and if he fucks that kid up we weren't going through the courts.

We gave him a ton of clothes, a phone, set up an email address. I wrote him a long letter.

In 2 years he visited the family twice.

4weeks ago Oscar's father calls the family to say they were an hour away..They pull in and go in the house. Dad lays down a trash bag of clothes and says to Oscar.

"Well, you're here where you can do whatever you want. Grabs his keys and drove off. They called me and I rushed there. He was skinny, weak, exhausted, and vacant. Had dreadlocks and over 1,000,000 crab lice crawling around.

Got him treated and haircut, then we started talking. In two years they were evicted 3 times and thrown out of a relative's home.

The more I'm hearing the angrier aI got. What really surprised me was my gentle and peaceful wife. After hearing all this, she turned very carefully and said "No leash from me, make the call and find him. Don't go to prison, don't kill him, the boy doesn't need to relate that to you."

In the last three weeks it's been very intensive. After being failed by every adult and every agency you're lied to and abandoned by your father..all at 9 years old.

In the rules, each child must have their own bed. I found the right tool, teaching them how to build a bunk bed. Next is a privacy wall, then a new bathroom. The wife and I agreed if they stick with me through this we are going to do a grand, strictly tourist, no holds barred, vacation blowout in Tampa.

The Childless Guy vs. Two Kids Coming In To Puberty.....stay tuned for the blow by blow. Vegas has the odds on the kids.

I'm coming back in, but first I have to save myself by saving two boys.

They should require us a license to have children.

Lucky to have landed in your lap, you are a good person.

Glad to hear your still fighting the good fight, Joe.  We'll keep the light on for you too.

Making a tangible difference, one kid at a time. Inspiring.

You are a Stud.

You had to build them a new bathroom?

I don'y understand the courts some times. They let the deadbeat dad have custody yet now want yo impose conditions on a place where he will be safe and taken care of.

Sadly this isn't a one off type of situation. It happens all too frequently across the US.

Thank goodness you and your wife are there to help the boys. They are going to need an enormous amount of help of all kinds.

I'll be staying tuned in. 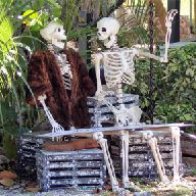 Going to be sketchy coming in and out.

Thanks for/ if you came by.

You are walking the walk and not talking the talk. It's wonderful to hear, and although we all miss you, you are doing good works and that is far more important.

Kavika is right. As a teacher, I saw this far too often. I even know of one mother who let her kids lose on the street before the older child figured out how to get to his paternal aunt's house. They were alone for over 3 weeks and skin and bones.

Keep up the good work Stu. More people should do this.

Best part is, I'm having so much fun with this.

I brought them to Home Depot and taught them how to ask for help.

The third time around I found them bsing with the lumber guy, standing there pulling and letting go of their new tape measurers on their belts.

I learned something else....9 and 12 year olds stink when you work 'em!

Saturday we took a lunch break "like working men do". ....it was going so well until a really pretty 13 year old came in with her mother.

That's when Oscar leans close and says..."aww crap! Now he's going to lock himself in the bathroom and think we can't hear him" I FELL OUT.

I love you! You are such a good man with a very large heart.

Thank-you for actually doing something for these children. They will always remember who their real father is.

Thank you, but I'm still not sure who's getting the better benefit. I learn something new every day.

As I had said Danny, the 12 year old has a screwy value system and at the moment I'm more cash cow than friend. Oscar, the nine year old, is totally different. He killed me the other day when we were talking "Do you mind if I tell people you are my Grampa?"  I melted right there.

And I've never had a 9 year old crack me up like an adult. He has an excellent grasp of English and how to turn a word. We were talking about getting in trouble and how it turns out.

Danny of course went all 12 year old talking about he'd be kicking ass.

Quietly, Oscar said "I've been arrested, you won't have to worry there." I asked him about it ..." The school was having cops come in and lecture. He laid a gun down and told me not to touch that gun, he didn't say anything about the one on his belt. They arrested me and put me in a cell by myself. It was not a pretty sight for me or my shorts"