It's not often you get to inspire an electric car speed record attempt, but it seems I've inadvertently done just that. 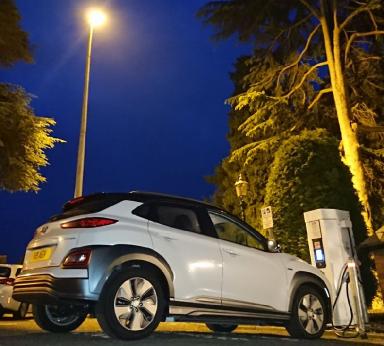 It began on Twitter, when I saw that there was an electric charging station in the parking lot at John O' Groats in Scotland, (almost) the most northern point of the Scottish mainland. The village is about as far from the most south-westerly point in the UK, Lands End in England, as it's possible to get without leaving the mainland: 874 miles (1.407km) to be precise. So, I idly wondered what the fastest journey time was for an electric vehicle. The idea then caught the eye of a TV presenter named Gareth Jones, host of the eponymous podcast Gareth Jones on Speed .

The pair would have to recharge the Hyundai Kona EV five times on the journey.
Gareth Jones

"Absolutely, it's all your fault," he told me when we spoke last week. "When you tweeted—I think it was March 7—a picture of the recharging point in John O' Groats, which has an Ecotricity charger, you said, 'I wonder what the record is from Lands End to John O' Groats?' I thought, that sounds like a plan. So I fairly casually, without much forethought, retweeted it, mentioning anyone who sells EVs in the UK asking if any of them wanted to give us a car." 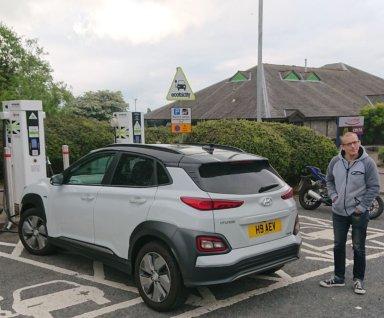 My original tweet is unavailable, because I recently decided social media should be ephemeral like street art, and now anything older than a couple of weeks gets automatically deleted. But sure enough, Jones' declaration on March 7 is still there to behold: 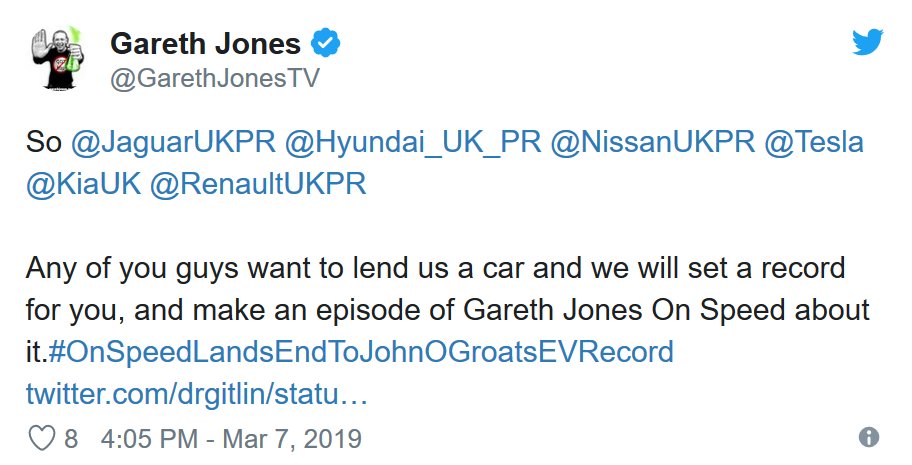 Hyundai was the first to respond to Jones, offering the use of a Kona EV. Jones roped in Paul Ireson (aka Zog), his friend and co-presenter on the podcast. "I got in touch with Zog—he's about the only really bright mind on the show—to look at the maths of it and see whether it could actually be done, and he thought it could," Jones said. "Using a 50kW recharging network, with a car with a 64kWh capacity, most of the journey is at 70mph (113km/h). He calculated that we could break the record."

Soon armed with a car and a route, the two set off for Cornwall to start the record attempt on May 17. Jones said they didn't make even the smallest modifications, like taking out the back seat ("We didn't even pump up the tires beyond the recommended pressures," as he put it). And from the sounds of it, there weren't really any real modifications to their driving style either.

"We weren’t driving to maximize range. I did some back of the envelope calculations—do we want to do 50mph (80km/h) strategy and eek out maximum range, or do regular motorway speed and get to the next stop quicker?" Ireson told Ars. "It was clear that normal motorway speed gives you a better overall average speed. If you assume you’re 25% less efficient at 70mph, therefore getting worse range, going a slightly shorter distance faster, then recharging, you should have an average speed of about 52mph (84km/h); it's about 41mph (66km/h) if you hypermile."

Unfortunately, the record attempt was in trouble from the start—the duo found out the Ecotricity charger at Lands End was out of order, meaning they couldn't start the journey with a 100% charge. Their original plan was to arrive in Lands End in the early afternoon to recharge the car and grab a few hours' sleep before setting off after dark. "Unfortunately, we lost hours and hours and hours recharging on the way down and so arrived at 8:45pm, went into the hotel, said, 'Can you sign this?' [a reference to a time card], and then we left," Jones said. "We started on the back foot because the car wasn't fully charged." 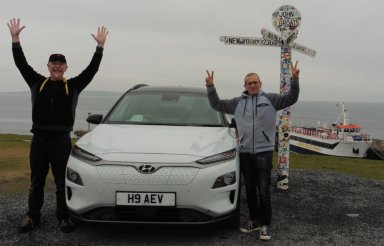 The existing record for an electric car journey between those two points stood at 19 hours and 45 minutes, a mark set by Jeff and Ben Allan in an 85kWh Tesla Model S back in 2015. In fact, Jones says there is no official Guinness record category for the journey. "They recognize the shortest recharging time, which stands at 3 hours 44 minutes and 33 seconds," he said. "Obviously, [the Allans] used Tesla's 120kW supercharger network for the bulk of that journey. But I believe when they did there were no superchargers in Scotland."

Sadly for our intrepid pair, the Kona EV can only charge at up to 75kW, a good deal slower than the Tesla. Worse yet, the DC fast chargers on their route weren't even that powerful. "The fastest chargers were up to, and here's the thing, up to 50kW. And this is where our attempt went awry," Jones said. "From our records, we didn't see 50kW charging at any point. We never got beyond 43kW, even on chargers capable of 50kW. That put our charging time much longer than we anticipated."

"I planned the route with two assumptions that turned out not to be correct," explained Ireson. The first was the broken Lands End charger. "We weren’t getting as far between stops as I figured. It's hard to answer definitively why; I think when I did the pre-trip planning I sloppily assumed optimum range, stopping at 10%, recharging to 80%. I figured we’d get 220 miles (354km) on an 80% charge. But the real-world range was more like 180-200 miles (290-321km) on an 80% charge."

In total, the pair had to stop and recharge five times. They also had a 25-mile (40km) detour to access a charger at Killington Lake services , and they were stationary for more than five hours. 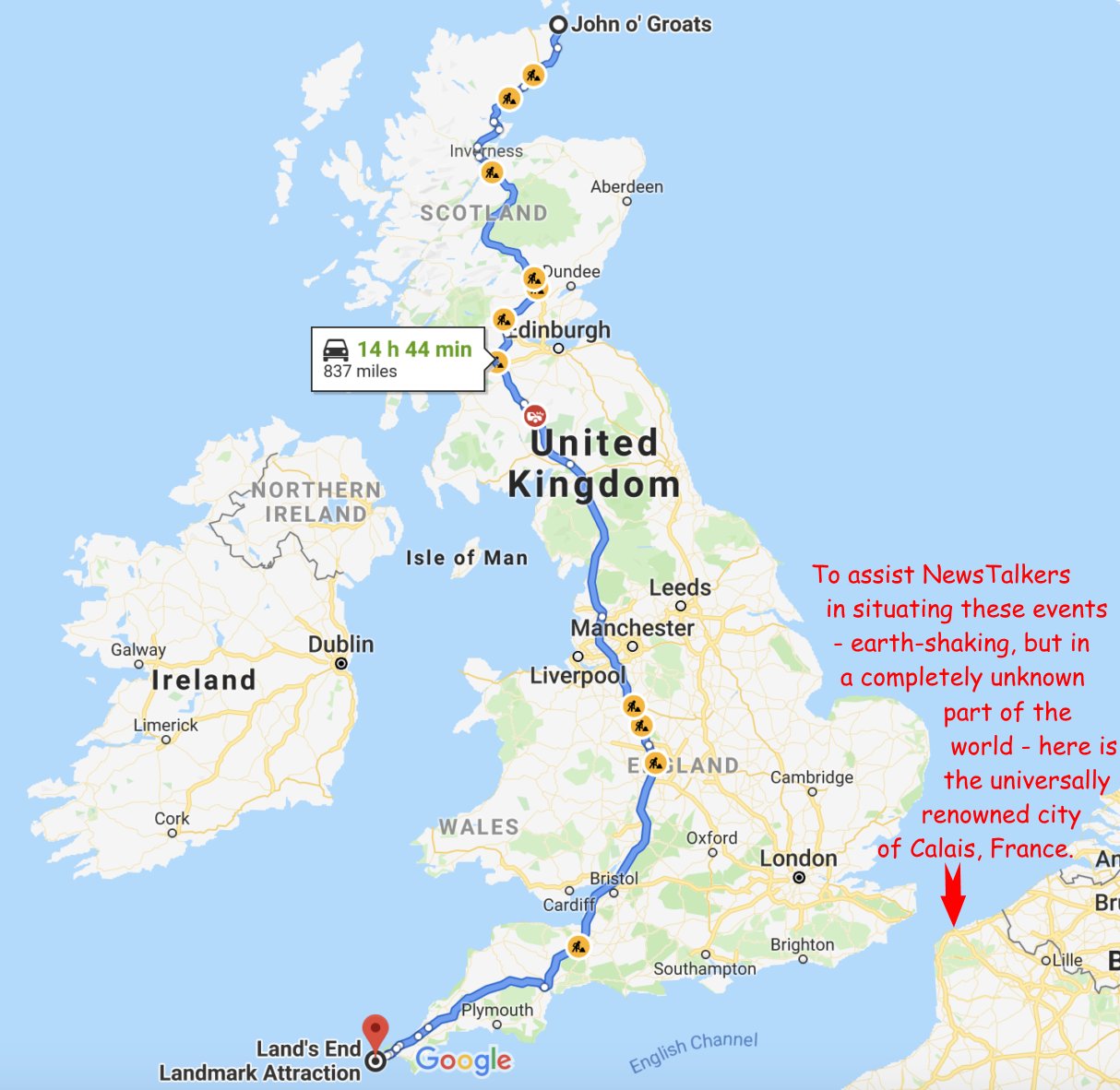 If at first you don't succeed

Even though they didn't set a new record, the pair don't seem discouraged. In fact, both are up for another attempt. "I would definitely be up for it, but not for another two weeks," Ireson said. "You’ve got a clear objective in mind, and I think that really kept us going. We enjoy each other's company, most of our musical tastes are the same, and so on. It is a bit of a test, though; you certainly appreciate lying down on a bed after all that. At a couple of points I did think about Gemini or Apollo astronauts, or cosmonauts in their little Soyuz, that we were having a slightly similar experience confined and living in this small capsule. OK, it was only 22 hours not several days…"

Jones believes the two "would have cracked the record easily" if they could have charged faster. They ultimately found most charging stops lasted between an hour and 80 minutes, all on networks that promised better charging speeds. But the team had no issues with the vehicle itself. "The car was flawless," Jones said. "Apart from rapid charging, it does pretty much everything a Model 3 does at half the price.

"You can see in the pictures Zog was very glum when we reached John O' Groats," Jones continued. "I was gleeful—we'd done it, we got to the end of the journey, which I still think is an achievement. And we were fairly close, largely on target. What it showed me was our strategy was correct; in theory we should have been able to [set a new record] but the reality of it—which we only really found out on the journey down to Lands End—was that we got a slower charge than we anticipated. And that Ecotricity's electric highway is rubbish. I'm really sorry to say that because they're a non-profit company who are doing the right thing making EV charging feasible. But time and time again, we seemed to encounter problems with them more than anyone else. At least their helpline is really good."

You can hear a first-hand account of the record attempt in the latest episode of the podcast , which went live on Thursday. And I'll be keeping an eye out for the duo's next attempt, which I'm sure you'll be able to read about on Ars once it happens.

Initial image: Gareth Jones (L) and Paul Ireson, aka Zog (R), at the start of their adventure in Lands End at the tip of Cornwall.     Gareth Jones

Sadly for our intrepid pair, the Kona EV can only charge at up to 75kW, a good deal slower than the Tesla. Worse yet, the DC fast chargers on their route weren't even that powerful. "The fastest chargers were up to, and here's the thing, up to 50kW. And this is where our attempt went awry," Jones said. "From our records, we didn't see 50kW charging at any point. We never got beyond 43kW, even on chargers capable of 50kW. That put our charging time much longer than we anticipated."

Ah, the drama of range-anguish....