Single Mothers Are Surging Into the Work Force

A booming economy is one reason, along with state and local family-friendly policies, but also a fraying federal safety net. 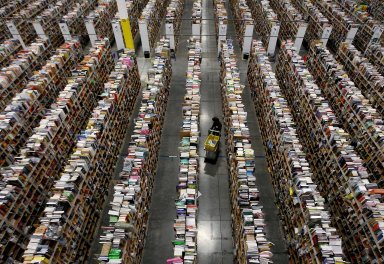 Single mothers in the United States can face many barriers to employment, like finding affordable child care and predictable work schedules. For many, a sick child or a flat tire can mean a lost job.

An Amazon warehouse in Arizona. Moving inventory in warehouses was one of the fastest-growing categories of jobs for single mothers.
Ralph D. Freso/Reuters

Yet since 2015, something surprising has happened: The share of young single mothers in the work force has climbed about four percentage points, driven by those without college degrees, according to a New York Times analysis of Current Population Survey data. It’s a striking rise even compared with other groups of women who have increased their labor force participation during this period of very low unemployment.

The last time single mothers’ labor force participation grew so rapidly was during the 1990s, driven by a thriving economy and major federal policy changes, including welfare overhaul and tax incentives. In recent years, though, there has been no new federal policy that would obviously encourage single mothers to work in large numbers.

Instead, they seem to be responding to a patchwork of policies, both carrots and sticks. At the federal level, the safety net has become less reliable, so working for pay is increasingly their only option. But at the local one, new policies like paid leave and minimum wage increases have made it more feasible for single mothers to work. Together, these appear to have primed them to take advantage of the biggest driver of all: a highly competitive labor market. 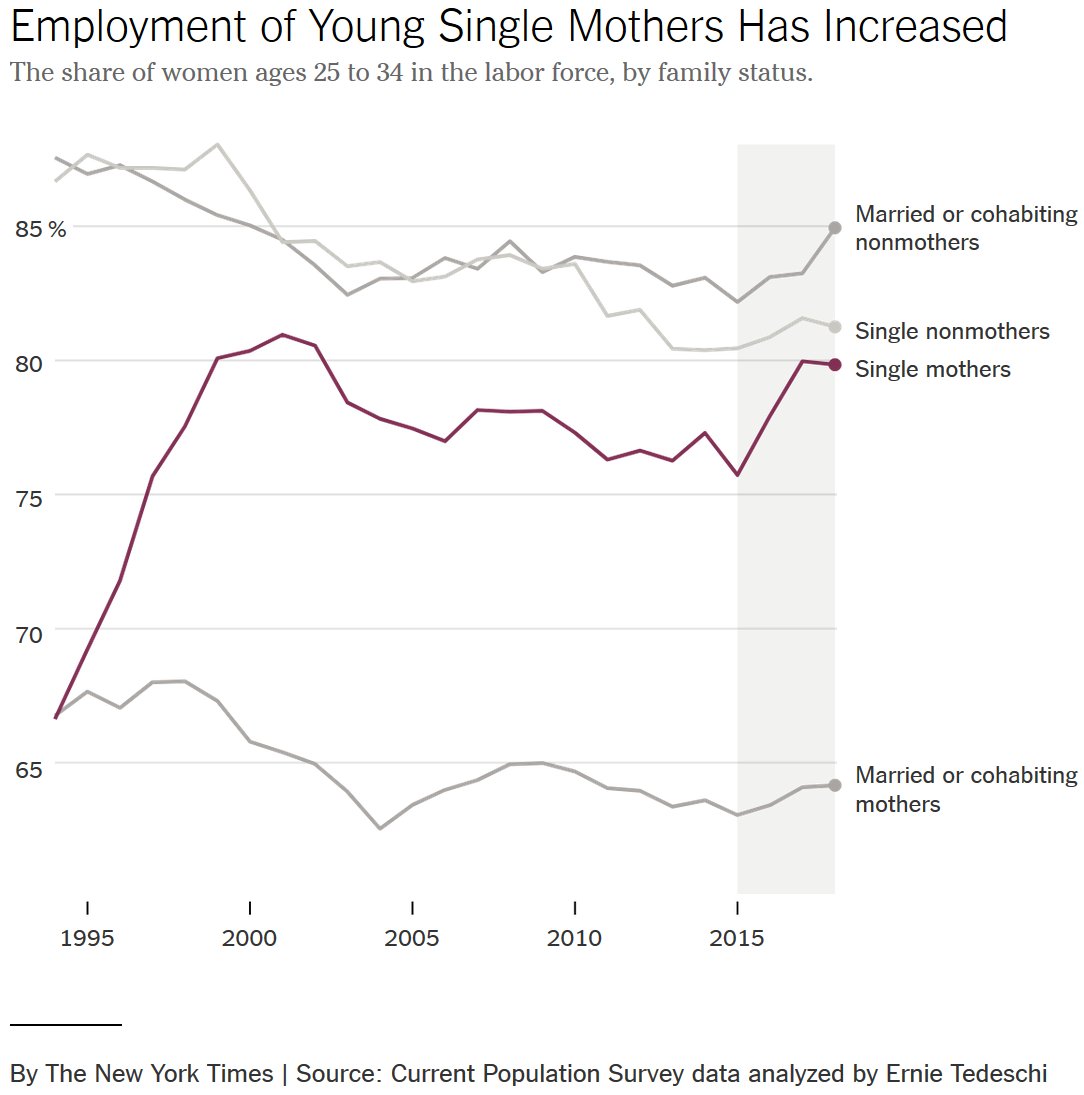 “The calculus of what makes sense changed a little bit,” said Pamela J. Loprest, a senior fellow studying low-income working families at the Urban Institute. Increased wages and family-friendly policies help “on the edges,” she said. “But as we say, there’s nothing like a strong economy to help everybody out.”

There are 2.7 million mothers ages 25 to 34 who are not married or living with a partner; they make up around a quarter of all mothers in that age group.

In addition to facing the daily challenges of raising and supporting children without the help of another parent, they tend to be poorer and less educated than other women their age. Roughly half make less than $30,000 a year, compared with just 20 percent of all young women. Half have only a high school diploma or less, compared with 29 percent of young women.

For many, jobs don’t pay enough to cover the child care they need to work — so without policies like paid parental leave, sick leave and public preschool, they can’t afford to work.

“We’re talking about mothers, but really we’re talking about the children they’re supporting,” said Matthew McKeever, chairman of the sociology department at Haverford College, who has studied single motherhood. “One of the major factors influencing the well-being of children in America is this economic inequality.” 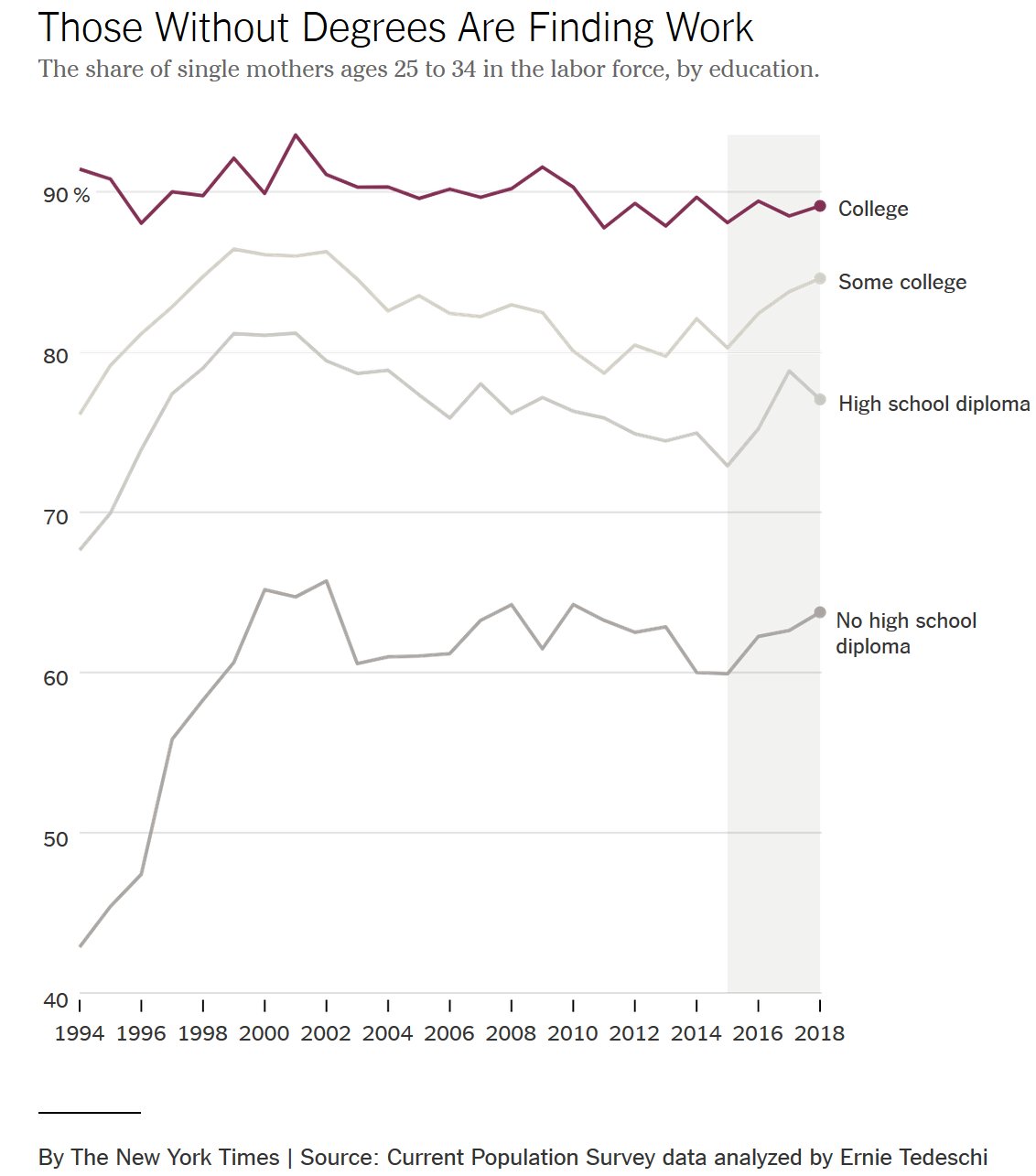 Jobs in nursing and in managing and moving inventory in warehouses had the highest growth in employment for young single mothers between 2015 and 2018. Retail and administrative jobs had the largest decline.

Though gig economy jobs (like driving for Uber or shopping for Instacart) are not consistently measured in the data, more single mothers are also doing these jobs in recent years, said Danika Dellor, executive director of Wanda , a Bay Area nonprofit that helps low-income single mothers with economic self-sufficiency.

When unemployment is low, it becomes easier for groups with barriers to employment to find work, and research shows it particularly helps less advantaged families. (Employment has also increased for those with disabilities or criminal records and for the long-term unemployed.) Employers might offer higher wages or benefits that could make working and parenting easier, like predictable schedules or remote working.

Single mothers’ entry into work in the 1990s was also driven by a thriving economy and low unemployment, in addition to major policy changes . The Personal Responsibility and Work Opportunity Reconciliation Act of 1996, known as welfare reform, required many recipients to work, and set an expiration date on benefits. The Clinton administration also expanded the earned-income tax credit for low earners, which becomes more generous the more people work. 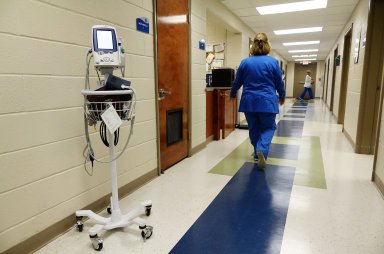 The employment rate of single mothers climbed, and the share on public assistance dropped. But work requirements also left a significant number without jobs or federal aid — a group researchers describe as disconnected . They tend to have less education and younger children, and are more likely to be facing physical or mental health issues, substance-abuse problems or domestic violence.

By 2016, there were roughly 3.3 million jobless single mothers and just 1.3 million families receiving welfare , known as Temporary Assistance for Needy Families, the lowest number since welfare reform was enacted, according to LaDonna Pavetti, vice president for family income support policy at the Center on Budget and Policy Priorities.

Even people eligible for TANF have been applying for it at lower rates, largely because of the reputation that it is difficult to obtain , researchers said. The Trump administration has proposed adding similar work requirements for people receiving food and housing assistance and medical coverage.

“Many safety net programs have been eviscerated, and work requirements have increased,” said Carol Burnett, executive director of the Mississippi Low Income Child Care Initiative , a nonprofit that supports working mothers. If more single mothers are working, she said, it’s for a simple reason: “They need the money.”

At the same time, some states and cities have passed policies that help working families.

One example is minimum wage increases . Areas that raised it most saw the largest rise in the rate of single mothers who work, the Times analysis found. (This doesn’t prove that the higher wages caused the return to work, though — areas with strong economies might have felt more confident raising minimum wages, for example.)

There’s also some evidence, though not conclusive, that the expansion of Medicaid under the Affordable Care Act might have increased employment, particularly for people with disabilities . Young single mothers’ participation increased four percentage points more in states that expanded Medicaid in 2014 versus those that didn’t.

Paid leave has probably helped, too. Five states and the District of Columbia have enacted or expanded family leave since the beginning of 2016. Paid sick leave went into effect or was expanded in eight states and 13 cities, according to the National Partnership for Women and Families. Some companies have also expanded paid leave for hourly workers , who had often been excluded from these benefits.

State spending on public pre-K has significantly increased each year since the 2015-16 school year, according to the National Institute for Early Education Research, and many cities have also begun offering public pre-K. Since the District of Columbia did so, the labor force participation rate of unmarried mothers with children under 5 has increased 13 percentage points , four points more than the increase for married mothers.

Other more recent policies aimed at working families will probably add to the momentum, researchers said. At least half of states are considering proposals to create or expand state earned-income tax credits. And last year, Congress approved a $2.4 billion increase of the Child Care and Development Block Grant to provide federal child care assistance to states, the biggest increase since the program began in 1990.

The tight labor market and piecemeal policies seem to be helping more single mothers afford to work. But they’re not enough on their own, researchers said, to address the deeper issues that make it a daily challenge to earn a living while caring for children in the United States — particularly if the economy slows.

“Even with increased wages and even with the changes that are being made around leave policy and the like, employees are still at the mercy of their employers,” said Kristin S. Seefeldt, an associate professor of social work and public policy at the University of Michigan. “The way we think about workers, it’s on us to take care of our personal and family issues. It’s embedded in our culture that it’s not the employer’s job to do that.”

Ernie Tedeschi is an economist and head of fiscal analysis at Evercore ISI. He worked previously at the U.S. Treasury Department. The analysis here is solely his own. You can follow him on Twitter at @ernietedeschi .

Claire Cain Miller writes about gender, families and the future of work for The Upshot. She joined The Times in 2008 and was part of a team that won a Pulitzer Prize in 2018 for public service for reporting on workplace sexual harassment issues.

“We’re talking about mothers, but really we’re talking about the children they’re supporting,” said Matthew McKeever, chairman of the sociology department at Haverford College, who has studied single motherhood. “One of the major factors influencing the well-being of children in America is this economic inequality.”